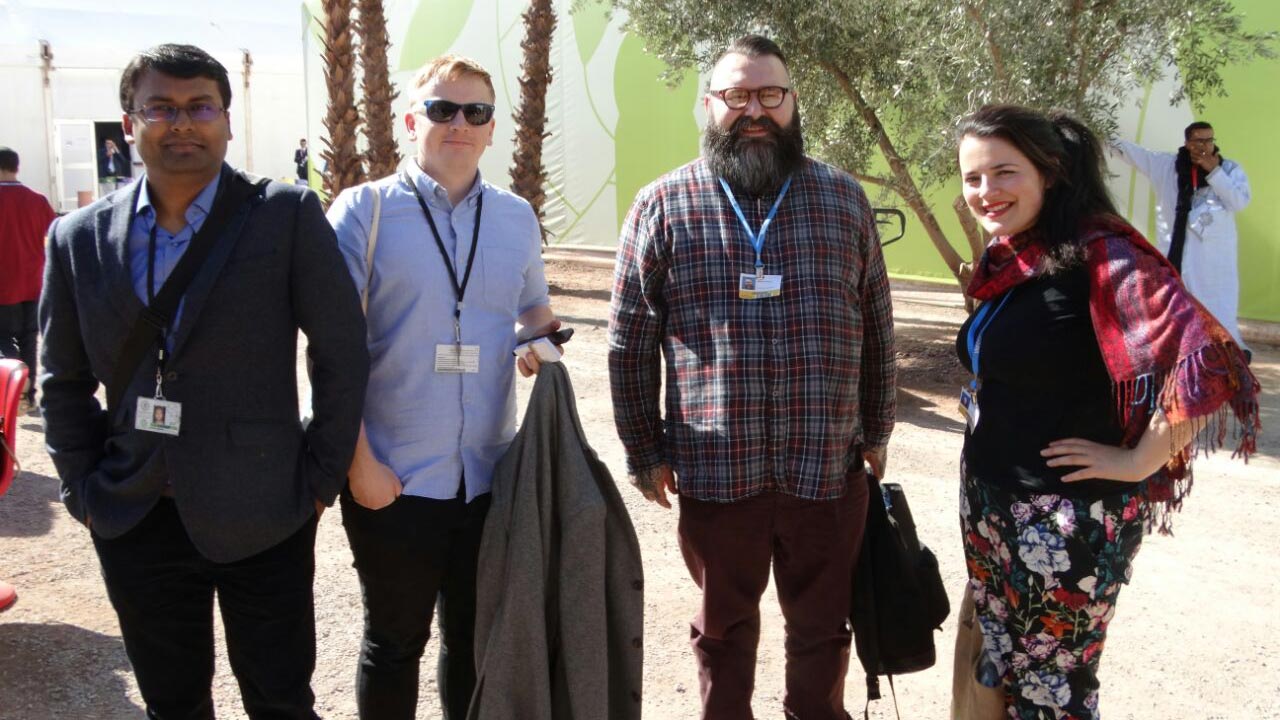 The Sheffield delegation at COP22 included Grantham Scholars and academics from across the University of Sheffield (TUoS). They hosted and took part in panels on food and energy.

Researchers from the Grantham Centre and TUoS shared their expertise on food security and sustainable energy with leaders and delegates from across the world at the event.

“The enthusiastic response to our research from the audience reflected the positive mood of the entire conference,” said Niall. “With people eager to learn more about the global responses to the questions of sustainable development and climate mitigation.

“Over the coming weeks and months, we’ll learn whether this enthusiasm can be developed into concrete action required to enact the Paris climate agreement of last year. Time really is of the essence.”

Niall has written more about the urgent need for action. Read: Impressions from COP22: Time is of the essence.

Co director in panel on GCC

Co director of the Grantham Centre, Tony Ryan and Jon Price, Strategic Advisor to the University of Sheffield, took part in a panel discussion titled Gulf Cooperation Council (GCC) and European institutes collaboration on economic diversification. They discussed barriers and solutions for scaling up investments in both advanced manufacturing and agri-tech. And they talked about developing low-carbon sustainable technologies for deployment in GCC and wider Middle Eastern and North African region.

Tony said: “COP22 gave us the opportunity to showcase our important research to leading figures in the world and raise awareness of the problem of food security.

“At Sheffield we are optimistic about the development of a sustainable future. We relish challenges because they provide us with the opportunities to discover solutions.

“As a centre of multidisciplinary expertise, it is important for our PhD scholars to develop their knowledge of policy and understand world issues. That’s why it was fantastic that our scholars had the opportunity to attend and even present at events.”

The University hosted and participated in 7 seminars with discussions on the global energy transition, food security and innovation with a range of international partners. Energy 2050, one of the UK’s largest energy research institutes, held a panel discussion on alternative aviation fuels. Academics from the institute were joined by Haldane Dodd from the Air Transport Action Group who discussed the ways in which the industry is embracing innovations in fuel and aeroplane design to reduce emissions.

The institute also held Reusing CO2. This event looked at how carbon dioxide can be used instead of oil-based products in chemicals, petrochemicals and fuels. Presenters included Peter Styring, Director of the UK Centre for Carbon Dioxide Utlisation. Also speaking was Katy Armstrong from CO2Chem, Richard Heyn from SINTEF; and Christoph Gebald from Climeworks.

Matthew Billson from Energy 2050, said: “As the Paris Agreement is ratified by more and more countries, it is important that we turn policy into action. Energy 2050 plays an important role in discovering ways to deliver secure and clean energy for the world. It was therefore important to share our knowledge and expertise at COP22 in Marrakech. We look forward to working with partners in industry and government to tackle the world’s energy challenges.”

More on the Grantham Centre at COP22

Impressions from COP22: Time is of the essence by Niall Bradshaw. In this blog Niall describes reactions to Trump pulling out of the Paris Agreement. He also tells us about his own work on fertilisers.

‘Shocking and scary’: how Trump’s victory was received at COP22 by Tony Ryan and Duncan Cameron. Reactions from COP22 as the world woke up to Trump’s election.