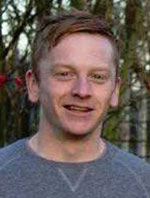 Grantham Scholar Dr Niall Bradshaw is now a Senior Policy Advisor in Agri-Food Chain Innovation at DEFRA. At DEFRA, Niall helped develop government policy on agricultural and horticultural innovation – including the 2021 launch of the Farming Innovation Programme. While at the Grantham Centre Niall researched increasing the nutritional value of organic fertilisers by releasing phosphate.

Low phosphate availability in soil often limits crops’ ability to grow. This problem is often managed by applying commercial fertilisers. However, this approach is unsustainable because at current rates of use, non-renewable global stocks of phosphate used in fertilisers are estimated to last only 150 years. An alternative is therefore urgently required.

One option is the large amount of phosphate present in organic fertilisers such as human and animal waste. However, this phosphate is locked within phytate, a molecule that plants produce but cannot absorb from the soil. Normally, phosphate is released from phytate by the actions of soil microbes. But agricultural practices have, over time, removed many of these microbes from the soil. As a result, the phosphate cannot be unlocked as easily which makes organic fertilisers less effective than they could be.

Responding to this problem, this project aims to increase the nutritional value of organic fertilisers by releasing phosphate from phytate using the enzyme phytase. In order to identify the point where phytase should be introduced to release the valuable phosphates for use by the plant, the progress of phytate from the plant will be traced. So phytate will be followed through the animal that eats it, into the soil where it is left as waste.

Overall, the goal is to develop a phytase-based treatment for organic fertilizers, ultimately increasing crop yields and improving the sustainability of crop production worldwide.

Scientists and engineers from the University of Sheffield helped world leaders shape a more sustainable future at COP22 in Marrakesh 2015. Niall Bradshaw spoke on a panel about sustainable agriculture. Read more.

COP22, Trump and the need for action by Niall Bradshaw. In this blog Niall describes the reactions at COP22 to Trump pulling out of the Paris Agreement. He also tells us about some of the panels the Grantham Centre held, including one featuring his own work on fertilisers.

For Journal Club, Professor Duncan Cameron considered the difficulties of measuring the value of ecosystems. And Niall, his PhD student, set our the challenges. Read: How should we value ecosystem services? By Niall Bradshaw.

You can find Niall Bradshaw on LinkedIn.

Stay up to date with Niall Bradshaw and the other Grantham Scholars: join our newsletter.