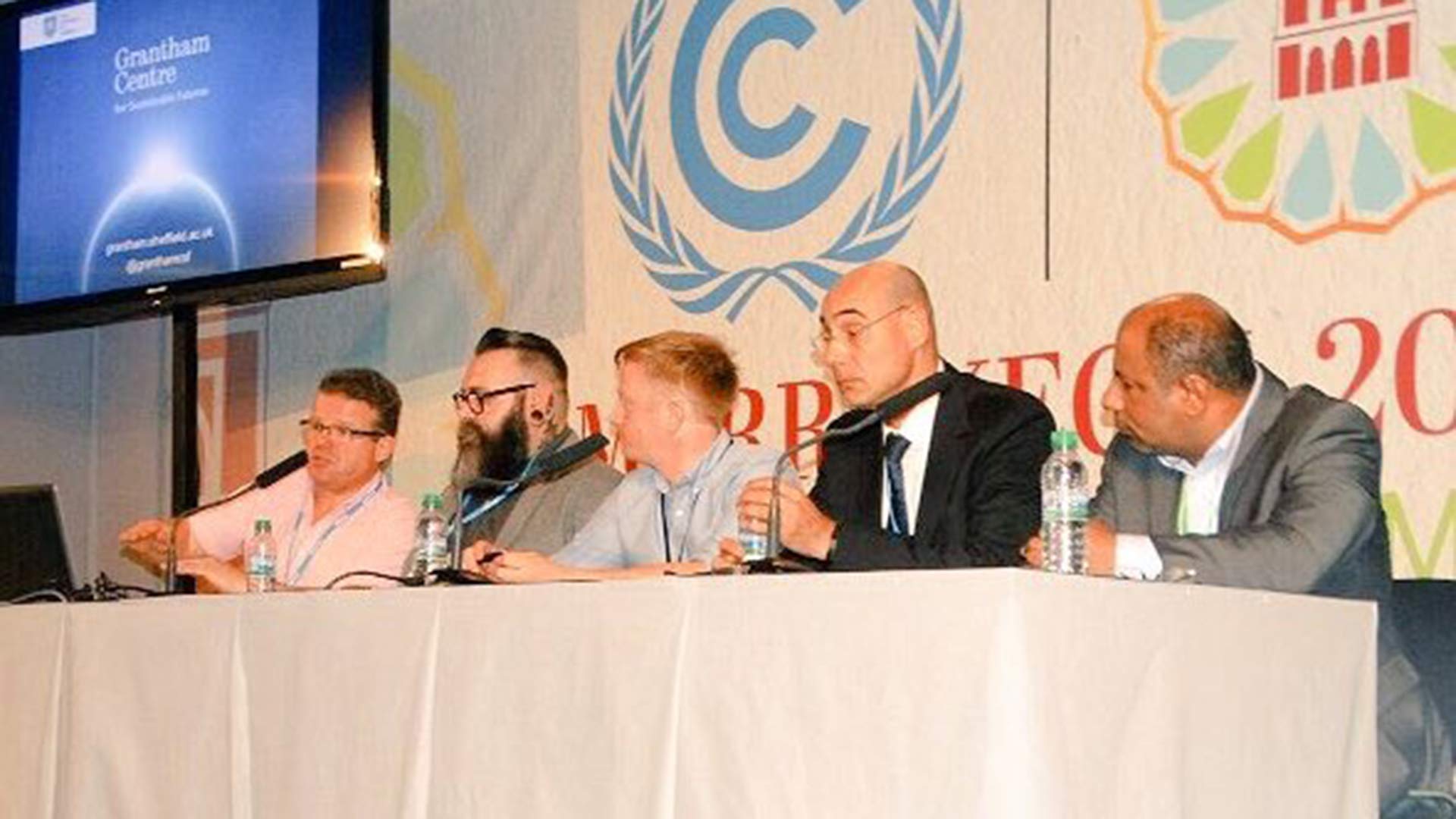 This week our Director Tony Ryan and Duncan Cameron join world leaders at the United Nations Conference on Climate Change. Here, they share perspective from COP22 as the world woke up to Donald Trump’s US election victory.

This morning over breakfast at our radio in old town Marrakech, conversation was dominated by Donald Trump’s election victory. We’re here in Morocco for COP22, the latest round of UN climate change talks. Climate experts from across the world have gathered here. They will decide on the actual detail of the Paris Agreement which was signed last year at COP21. Our group from the University of Sheffield is diverse. We have delegates from India, Zimbabwe, as well as Britain. Yet we were all in agreement. Trump’s election is shocking and scary news for the world.

Delegates from around the world react to Trump

We arrived at the COP22 “blue zone” for delegates and were quickly approached by a French TV crew, wanting to hear our thoughts on Trump. Unsurprisingly, we said this was a disaster for the climate and for global equality.

It then began to dawn on us that there was something different about the atmosphere at COP22. When we visited Paris last year, the sense of excitement in the air was palpable. But today, things feel altogether more sombre.

Trump’s assertion that climate change was a hoax “created by the Chinese” was never far from any of our minds.

Given the numerous different nations represented here, we recognised we were in a privileged position to understand how other people felt about the Trump victory.

An American artist we spoke to couldn’t even express her shock. Living in Marrakech, her work asked questions about human nature, the human condition and our existence. Now, she questioned what had happened to her home country.

A Norwegian delegate and negotiator, told us the world needed to unite to contain the right wing populism that was a gathering force all over the world.

And a member of the Libyan negotiation team, who had lived in the UK for five years, said, pessimistically, this was just a game of democracy. For us, it feels like the endgame of neoliberal democracy.

Swedish and American delegates discussed with us their concerns that Trump would now seek to renage on the US’s ratification of the Paris climate treaty. The Americans hoped ‘the system’ would not let him.

We’ve seen big anti-establishment movements before – after the 1929 Wall Street crash in the US, for instance, the rise of fascism in 1930s Germany, or during the global recession in the 1980s.

But, as scientists, we feel that the impact of these historical events on the environment was buffered by the planet’s natural resources. Resources that allowed continued economic growth, such as the exploitation of North Sea oil, rescuing the UK economy.

That these resources – or at least those we could use even remotely sustainably – are now all but exhausted.

Americans have elected an anti-sustainability President, unwilling to face up to environmental degradation. They have voted for a dream based on a time past – when America was “great”, oil prices were low, and the white working class felt secure. Whether the planet has the capacity to support a new round of unsustainable consumption is highly in doubt.

However, it was brought starkly home to us that the rest of the world feel that Brexit paved the way for Trump’s visit. As a Moroccan scientist candidly said to us: “well, you started it.”

To get a broader perspective, we moved from the UN delegate area to the “green zone”. Here companies showcase their sustainable technologies and civil society explore their role in climate change mitigation. Our conversations here made it apparent that this diverse community has the appetite to effect change. But they will need to demand sustainability and reject economic models dependent on growth.

The future is now on the table. But we, as a planet, have to choose between the path of self-destruction by over consumption or a more equitable and sustainable solution.

More on the Grantham Centre at COP22

This article was originally published on The Conversation. Read the original article.