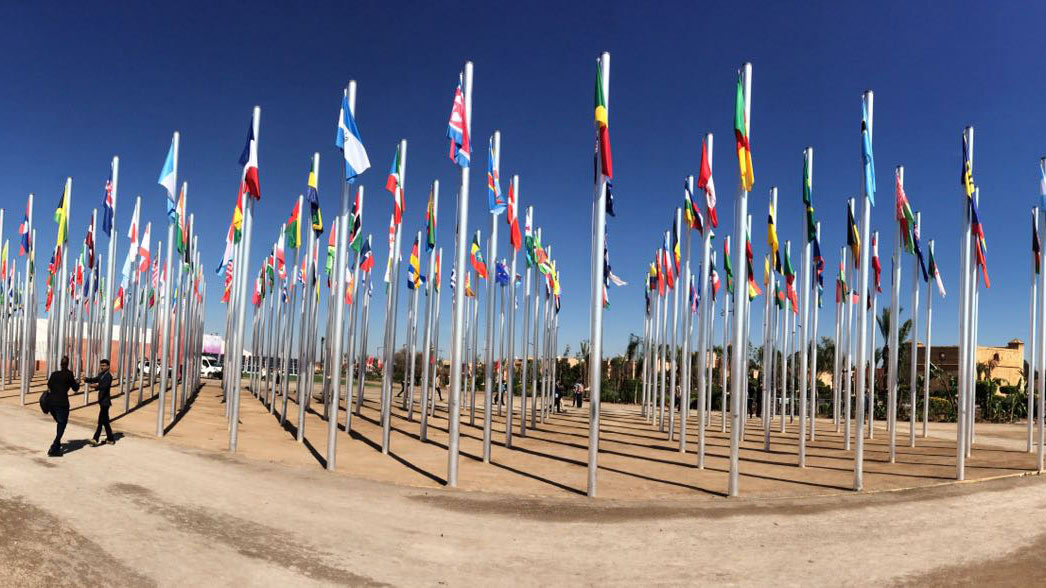 Grantham Scholar Niall Bradshaw reports back from COP22. Held in 2016 as Trump came to power in the US, and pulled out of the Paris Agreement, the mood was grim. But people galvanised around the need for action.

News last week was dominated by the result of the US presidential election.

The mood among our delegation was anguished. And looking at my Twitter feed, it seemed that that feeling was echoed around the world. Trump has pledged to pull the US out of the Paris Agreement. As he did so, he also dismissed climate change as a hoax created by and for the Chinese.

With this in mind, it felt as though the enthusiasm and promise surrounding COP might well have all been in vain. On arrival at COP22, the feeling was indeed grim.

COP22, Trump and the need for action

Our delegates were interviewed by a French television crew, and contributed an article to try to express what Trump’s move might mean for our collective future. However, as the days progressed and further global delegates arrived it became clear that after distress must come action.

During the second week of the talks, UN Secretary-General Ban Ki-moon addressed the conference.

“What was once unthinkable, has become unstoppable”. Ban Ki-moon urged Trump to listen to and understand the severity and urgency of the issue. To me, it was reassuring to see so many people, from so many walks of life, converging together with an optimistic attitude towards our future.

Our delegation gets to work

Our COP22 delegation included members of the Grantham Centre and Energy2050. We held several panel discussions, inviting delegates from business and policy to offer their insights. Plus we showcased the great work going on at TUoS.

I spoke at Understanding and mitigating embedded energy and CO2 in the agri-food system. Here I made the case for phosphate recovery from waste streams in response to an impending global phosphorus crisis.

Working on organic fertilizers myself, it was particularly interesting to gain insight from Khalid. He spoke about how Morocco can work towards cleaner chemical fertilizer production, an industry it will likely dominate in the coming years.

Morocco controls 73% of the world’s phosphate resources. And it is looking to increase its production of blended fertilizers which, as well as phosphorus, contain nitrogen and potassium. Traditionally, nitrogen in the form of ammonia has been produced by the energy intensive Haber process. Haber uses both high temperature and pressure to react atmospheric nitrogen with hydrogen derived from natural gas, a fossil fuel. This process produces 6 tonnes of CO2 for every tonne of hydrogen produced, and consumes 2% of the world’s energy each year.

Morocco, buffeted by strong trade winds from the North Atlantic, is in the unique position of being able to couple the generation of sustainable wind energy with low-carbon fertilizer production. They can use the clean electricity produced to provide hydrogen, via the electrolysis of water, with zero carbon emissions, rather than natural gas.

Together with Tony Ryan and Duncan Cameron, Al-Fazari then moved to discuss their ambition to develop the microcosm farm.

Designed as an option for sustainable agriculture in dry desert environments such as those in Oman, the microcosm farm aims to use solar thermal energy to desalinate seawater for the irrigation of vast greenhouses. With a lack of suitable soil, they hope to use an artificial growth medium supplied with sufficient nutrients along with atmospheric CO2 enrichment to yield valuable crops, with any organic wastes processed to fertilizers and animal feeds. Innovations such as this may prove vital in the future, providing a sustainable option for food security in the face of the ever-growing challenges of climate change and desertification.

Impressions from COP22: the need for concrete action

The enthusiastic response to these projects from our audience reflected the positive mood of COP22. People were eager to learn more about the global responses to the questions of sustainable development and climate mitigation.

Over the coming months, we’ll learn whether this enthusiasm can become the concrete action required to enact the Paris Agreement.

What’s most clear is that time really is of the essence.