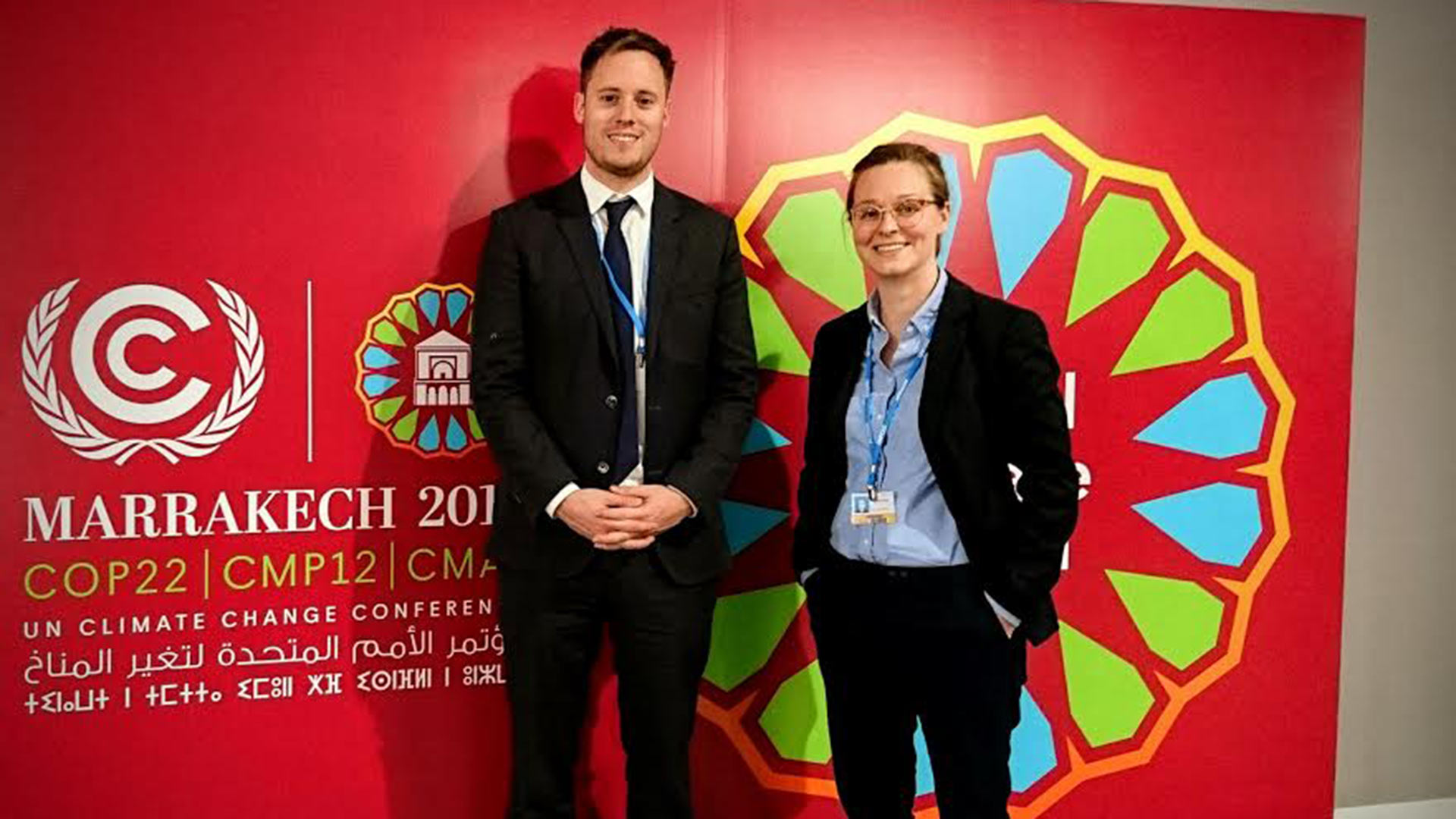 Grantham Scholar Kaisa Pietilä joined world leaders at COP22. Here, Kaisa reflects on the role of ‘corridor diplomacy’ at COP22 and how biodiversity was left out of the talks.

About two months into my PhD, I found myself on a plane headed to Marrakech, Morocco, which hosted COP22. Being part of the University of Sheffield delegation to the COP was a fantastic opportunity. I wanted to learn more about international policy-making in person, and so I certainly made the most of it.

For some years, I have been following global environmental governance for my studies, work and, at times, pleasure.

Besides reading about what goes on in these international high-level meetings from IISD Reporting Services (which I highly recommend!), I often flick through the daily summaries. These usually consist of a lot of pictures in the meeting venue besides the report. After coming home from Marrakech, I was glad to find myself in a photo (green shirt, round glasses) looking very serious whilst watching John Kerry deliver his final address to a climate COP.

Perhaps because of my background, I was not surprised or amazed by what I saw when walking around the venue. My conference partner, a fellow Grantham Scholar Robert Hardie, seemed slightly disappointed in my reply to his question on how I was finding COP22: “It’s pretty much exactly what I was expecting!”.

I believe knowing what to expect allowed me to focus on the things I thought most relevant to me: ‘corridor diplomacy’, biodiversity in a climate change COP, and networking. What I encountered within these spheres was what surprised me most.

This can be summarised as the casual discussions that take place outside official meetings and spaces. For example as people bump into one another on the corridors of office buildings, sit at the same table for lunch, and in general exchange views in semi-unplanned encounters outside the official and the accepted.

My interest in this type of diplomacy is that you cannot capture it in writing, and you cannot learn it by reading books. You need to be there in person to experience it. I was by surprised how openly people were willing to talk about their views of the COP, the negotiations, as well as their own agendas. It was in these corridors where I found the most intriguing insights into what was going on behind closed doors. And it was in the corridors I got the most accurate analyses of what the COP22 would result in, rather than in the official statements by ministers and heads of states.

Experiencing how to function within such unofficial spaces of knowledge exchange and decision-making is one of the key lessons learned for me.

However, at COP22 I was surprised by how little emphasis there was on biodiversity.

Besides a handful of conservation organisations, it seemed that biodiversity was by and large absent. This experience highlights the need for the type of research that I do. Because no solution to the current environmental crisis – climate adaptation, mitigation, green economy, carbon capture, and so forth – is a sustainable one if biodiversity comes as an afterthought.

At a side event, Inger Andersen, the Director-General of the International Union for Conservation of Nature (IUCN), answered my question on what role biodiversity should play at a climate COP. She said that “the story of climate change is the story of biodiversity, and vice versa”. She also noted that there is work being done to synergise activities between the UNFCCC and the Convention on Biological Diversity (CBD), but that much more work remains to be done. We will need to look at the whole story rather than a part of it if we are to be truly sustainable going forward.

The third lesson I learned from COP was about networking.

Some of the most interesting sounding events which I had thought would be great for networking were dull and not particularly useful. It did not take me long to apply a key skill from reading journal articles and books: if halfway through you realise that what you are reading is of no relevance, it is better to move on.

In doing so, I wandered into events that I had not thought relevant and ended up meeting fascinating people with different views on what to do about climate change. This unexpectedness of networking opportunities caught me by surprise not only at the venue, but also in leaving the venue. One of the most interesting discussions I had was on the bus on my way home!

With these lessons in mind, I feel much better equipped as an academic engaging with the policy world. Here’s to many more COPs to come, to unexpected networking, to corridor diplomacy and most importantly, more emphasis on biodiversity everywhere!