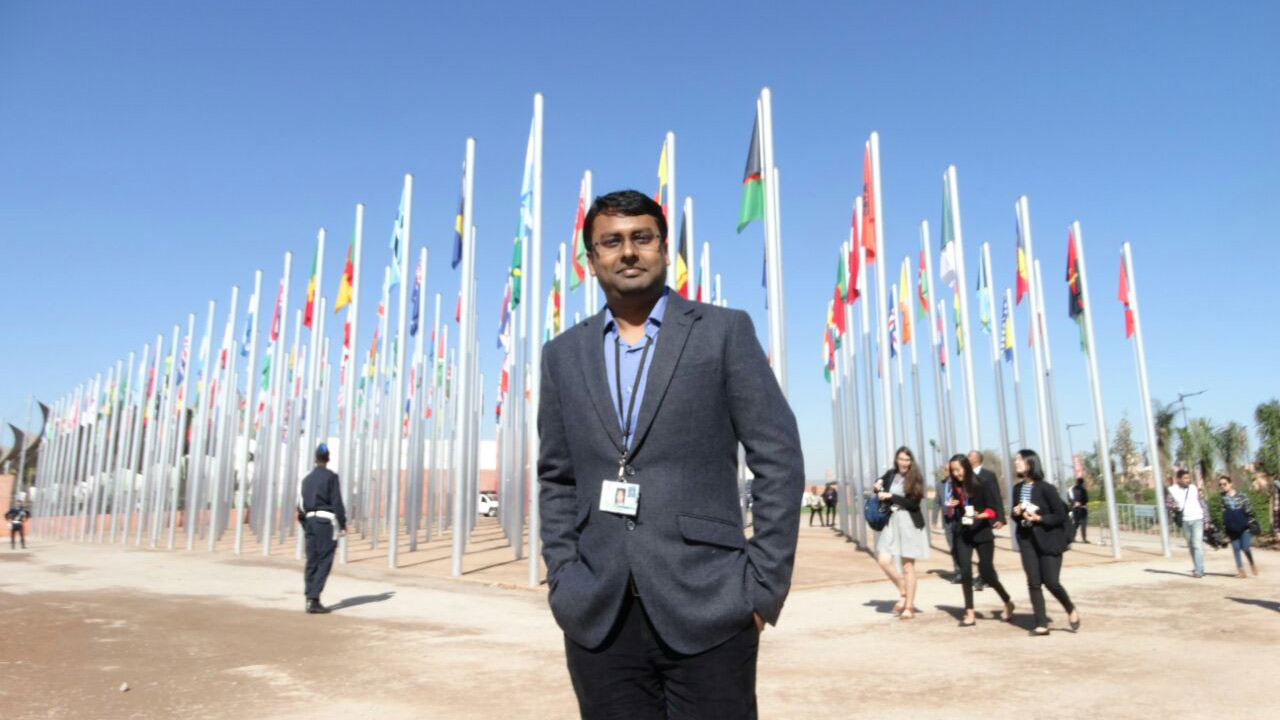 Grantham Scholar Angesh Anupam was part of the University of Sheffield’s delegation to COP22 in Marrakech. Here Angesh gives us a view from the ground, which includes events put on by the Grantham Centre.

Honouring the Paris Agreement in Marrakech

The Paris agreement – the first global agreement to fight climate change, agreed at COP21 – officially came into force on 4 November 2016.

So far, more than 100 nations including the US, China and India have already ratified the agreement. As a result, their Nationally Determined Contributions (NDCs) have taken a formal shape. However, despite many bold steps agreed at COP21, there are no binding norms by which a NDC can be brought under the purview of an international law. But that does not diminish the entire agreement, especially the commitments shown by the major emitters of the world [1].

COP22 at Marrakech was held to take into account the action steps following the historical Paris Agreement. Being a world-leading university, the University of Sheffield sent official delegations. I was part of the delegation, and the overall experience can be summed up as intriguing.

On my first day I explored the Green Zone. The Green Zone is the space for civil societies, categorised according to various themes such as sustainable development, agriculture, university research, environment and innovation.

We interacted with exhibits including Siemens, who demonstrated the functioning of a wind turbine and how this kind of setup has revolutionised renewable energy production in Nordic countries. However, the lack of a proper storage feature has limited the harnessing of wind energy, posing an interesting research question.

From day 2 onwards, we focussed on the events that the Grantham Centre and Energy2050 had organised.

One of the events we hosted was ‘Manufacturing innovations for fuel efficient aerospace and automotive industries in Morocco’. Because of my engineering background, I could relate to the scope of advanced manufacturing towards climate change mitigation.

The AMRC in Sheffield is one of the best examples of how next generation manufacturing techniques can make a difference. For example, if the mass of composite materials used in building an aircraft is reduced, then it will substantially increase the fuel efficiency. In turn this will reduce the emissions. The aerospace industry plays a major role in the Moroccan economy and job market [2], so research centres like the AMRC could play a key role in the economic development of countries like Morocco.

The next interesting event was ‘Understanding and mitigating CO2 and embedded energy in the agri-food system’. My own research incorporates computer modelling of a CO2 mitigation strategy. So this session broadened my understanding on the issue.

Phosphate’s importance in agriculture is well-known and the most interesting fact from this event was that Morocco has almost 75% of the world’s estimated phosphate reserve [3]. This highlights the importance of a global supply chain. And how the entire world needs to work in coordination to deal with the issues like food security.

Recent global political developments mean the free movement of people, climate change agreements, etc, are being debated. So it is vital to understand that in order to serve the basic needs of the growing population of the globe, an optimised sharing of resources and technologies is essential.

For instance, modern agricultural techniques of the developed world can help developing nations adapt the sustainable practices of food production. Whereas mineral-rich countries like Morocco can harness green energy and efficient mining techniques to met the global demand for fertilisers.

We are international – and interdisciplinary

As a Grantham Scholar, I’ve attended several interdisciplinary events. But COP22 has positively catalysed my thinking towards the climate change debate.

The Grantham scholarship takes into account sustainability leadership in addition to our research. And going to COP22 has added to that aspect of the scholarship. Also, I’ve been part of the #weareinternational campaign since its launch and going to COP22 further helped me understand how a diverse global community can help tackle a challenge like climate change.