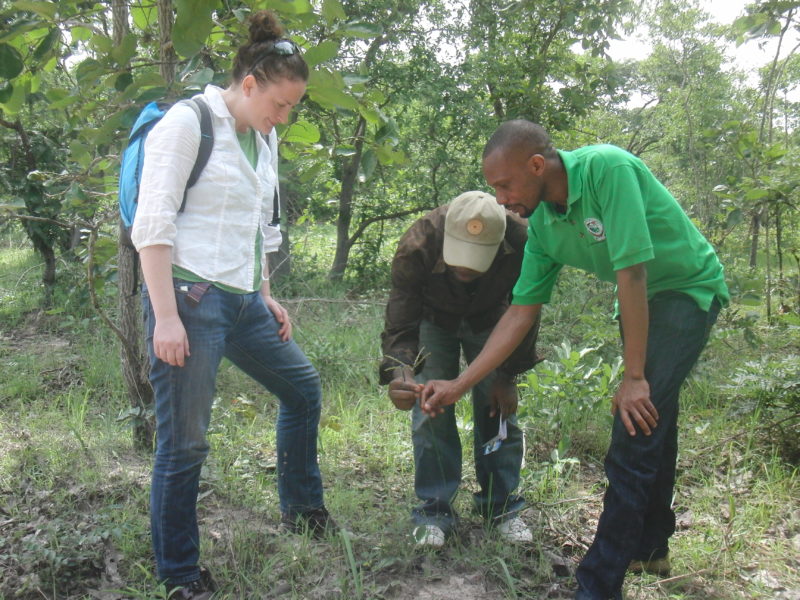 Grantham Scholar Suma Mani explains why a paper on the evolution of different types of photosynthesis could help feed the growing global population. The paper, C4 anatomy can evolve via a single developmental change, is co-written by Suma’s supervisor Prof Colin Osborne (our former Associate Director).

A team of researchers, including my supervisor, have shown how anatomical modifications in leaves led to a transition in plants from C3 to C4 photosynthesis. Here, I will explain their findings and explain why this discovery is important.

Background: photosynthesis is vital for life

During photosynthesis plants remove carbon dioxide from the atmosphere to produce sugars. This process is powered by sunlight. And it takes place in specialised regions of the leaf called chloroplasts. These chlorophyll containing organelles are found in the leaf tissue layers mesophyll and bundle sheath.

Because plants are the primary source of energy for consumers, photosynthesis is central to the functioning of any ecosystem.

Plants have evolved to have 2 different photosynthetic pathways.

A striking difference between C3 and C4 plants is the presence of chloroplasts in bundle sheath cells in C4 plants, in addition to those in the mesophyll. In C4 plants this addition prevents the wasteful process of photorespiration (where at higher temperatures oxygen gets fixed instead of carbon dioxide).

Plants with C4 photosynthesis dominate the tropics and sub-tropics. Their evolution from C3 photosynthesis to a highly efficient C4 pathway evolved more than 45 times in many families.

As with questions surrounding human evolution, plant scientists are interested in the evolution of plant traits. A major motivation for this is to see if there are lessons in nature for making our crops more productive. High yielding crops are important to keep feeding people and to support rural economies.

And this is why this paper is important. Because it shows how anatomical modifications in leaves have led to this transition from C3 to C4 over time.

In short, it could help us adapt crops to produce bigger yields.

The evolution of C4 plants

The evolution of C4 plants is dated to around 30 million years ago, the early Oligocene period. The early Oligocene was marked by increased oxygen and falling carbon dioxide concentrations in the atmosphere. Under these conditions of decreased carbon dioxide, Rubisco’s affinity to fix oxygen negatively affected its functional efficiency.

So, as a counter-response, plants adapted to different photosynthetic pathways that increased Rubisco’s affinity to utilize carbon dioxide. And the resulting development of a new C4 pathway by anatomical modifications in the mesophyll and bundle sheath layers of leaf cells was crucial for survival.

In most C4 plants, the carbon pump works in mesophyll cells to deliver carbon dioxide at high concentrations in the bundle sheath where Rubisco is localized. To make this process efficient, evolutionary changes in anatomy have to increase the proportion of bundle sheath in the leaf. Since bundle sheath tissues are wrapped around veins, there are two ways this could happen. One, through the insertion of a greater number of veins. Or two, by bundle sheath cells around each vein becoming larger. But which was it?

Commonly known as cockatoo grass in Australia and black seed grass in South Africa, Alloteropsis semialata is unique among plants in having forms that use C4, C3 and intermediate (C3-C4) types of photosynthesis. As such, the plant serves as a compelling model to discern the evolution of photosynthesis by comparing a continuum of leaf anatomy of each photosynthetic type.

It is widely distributed in tropical and subtropical areas of Africa, Australia and Asia In the southern African region of Zambia, these plants all coexist in the same geographic region, with C4 forms that have also spread out across the Old World tropics, as far as South East Asia and Australia. Marjorie Lundgren, the lead-author of the paper, travelled extensively to Tanzania, Zambia, Australia, South Africa, Mozambique, Zimbabwe and Cameroon. She collaborated with local botanists, and collected plant materials in this internationally collaborative research effort.

Once they had their samples, the team then quantified the anatomical changes in the leaf that accompanied the transition from non-C4 to C4 phenotypes.

Evolution of photosynthesis: what changed and when?

And they reasoned that the traits that existed before the evolution of C4 will be shared by some of the non-C4 members. However, properties which took place subsequently as an adaptation will be restricted to C4 plants.

Results showed that C3, C3-C4 and C4 Alloteropsis semialata all have distinct leaf anatomy. However, the only trait shared among all C4 individuals – and none of the non-C4 plants – is an increase in vein density, specifically minor vein development.

Minor veins as a single developmental change in C4 plants

Minor veins in C4 plants increase the volume of bundle sheath cells in the leaf. In turn, these boost the activity of Rubisco, distinguishing C4 plants. Frequent and regularly spaced minor veins in leaves is universally and uniquely associated with the C4 genome, which helps to establish the overall anatomical variation between non- C4 and C4 phenotypes.

Professor Colin Osborne explains it this way: ‘C4 photosynthesis evolved by modifying the leaves of non-C4 species. However, most C4 plants are distantly related to non-C4 plants and have changed in a multitude of ways. The challenge for researchers is to get closer to the evolutionary transition from non-C4 to C4. Studying the huge variation within the Alloteropsis species lets us do this, to figure out what changed and when.’

Overall, the team successfully recognised the leaf features that differed consistently between C4 and non-C4 plants: the insertion of many small veins. And these veins led to a leaf anatomy suitable for C4 photosynthesis.

The evolution of photosynthesis: what next after this paper?

With the global populations growing, food shortages are here to stay. As a result we need more high yielding crops to ensure food security. One way to meet this need would be the introduction of C4 traits into rice. These traits would increase photosynthetic efficiency, thereby increasing crop yields which could help reduce world hunger.

As a result of this study, there is now hope for engineering C4 photosynthesis in rice. Collaborative efforts between the International Rice Research Institute, Philippines, and various organizations across the world now aim to do just this. Focus will be on the manipulation of genetic, anatomical and biochemical traits guided by the C4 pathway.

Armed with knowledge of developmental change, the team now hopes to research the genetic changes responsible for C4 anatomy.