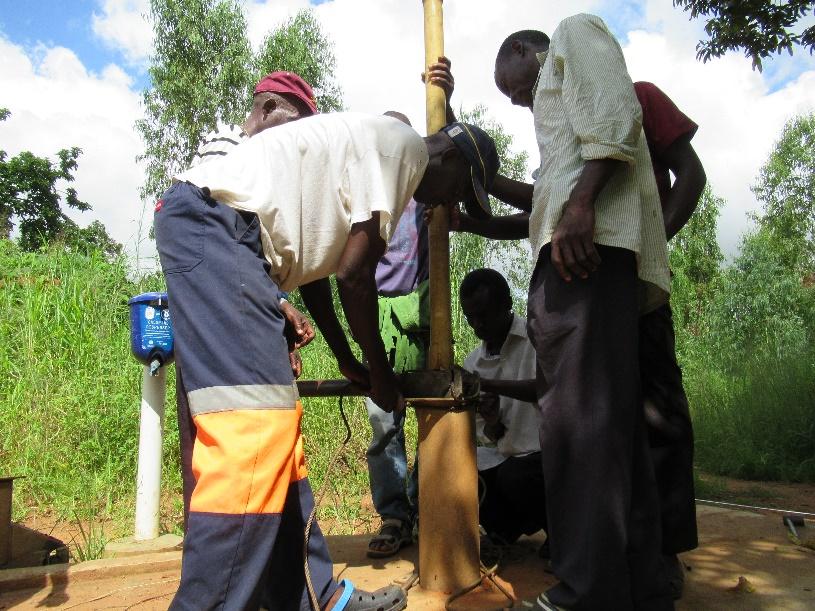 Grantham Scholar Naomi Oates researches rural water projects, and this is her 3rd blog about her fieldwork in Malawi. Here she discusses how the ambiguous role of area mechanics reflects the entanglement of water, policy and politics for everyday people. With inputs from Thoko Mtewa and Dr Evance Mwathunga (Chancellor College, University of Malawi).

Competing narratives surround the role of ‘area mechanics’ in Malawi

In November 2017 I started my ‘politics of water’ blog to share experiences and findings from my research in rural Malawi on water governance and service sustainability. The first instalment describes my initial impressions of Balaka District while the second explores the relationship between extension workers and rural communities.

This might have left you wondering – what about everyone else?

Water services in Malawi are decentralised, at least in theory.  This means two things. Firstly, district councils, together with district water offices, are mandated to develop and monitor water infrastructure in rural areas.

Secondly, communities are expected to maintain and repair their water points with minimal external assistance. For more serious problems, local ‘area mechanics’ are their first port of call, followed by the district water office.

In reality, district water offices are severely under resourced, there are currently few area mechanics, and the effectiveness of community-based management varies considerably. However, where they are present, area mechanics are thought to play an important role in keeping water points functioning.

What are area mechanics?

So what is an area mechanic? This sounds like a simple question, but the answers are complex and contradictory.

The area mechanics Thoko interviewed in Balaka for her MSc research tended to consider themselves, foremost, as volunteers working for the greater good of the community. After all, they were selected from the local community and have strong social ties with the people they serve.

An area mechanic may be a relative, a neighbour or a fellow churchgoer, even the village headman himself. Trustworthiness was emphasised by communities as an important criteria.

The depiction of area mechanics as volunteers has been echoed in my own conversations with extension staff and NGO workers, but in combination with another term – entrepreneur.

According to national policy, area mechanics are meant to operate as independent businesspersons. They are given training and a few basic tools, after which they are expected to make a small profit to sustain their operations. They are also encouraged to sign written contracts with communities to clarify payment for services.

This model is clearly aimed at economic viability and is meant to incentivise area mechanics by providing them with an income. Arguably, the model has failed to gain traction locally because it ignores the social context in which area mechanics operate.

Area mechanics plugging the gap for the government

A third view is that area mechanics are integral to formal water governance arrangements – in other words part of, or plugging a gap in, the government’s extension system. This may not be stated explicitly, but is implicit in the use of government issued ID cards.

To give another example, area mechanics are sometimes (but not always) introduced to communities by a government representative in order to establish their legitimacy. Several of the area mechanics Thoko spoke to wanted their role to be formalised to enable them to negotiate fees with communities, or conversely in the hope of receiving material and financial support from government.

The ambiguity of water mechanics

Despite appearances, none of these narratives is mutually exclusive. And they may be employed at different times depending on the context. As one extension worker explained to me: “Area mechanics are entrepreneurs by design and should make communities aware of that. They are supposed to have a signed agreement. The area mechanic needs to be paid, a little.”

He then went on to clarify:

“It is not payment as such but a token of appreciation. It is up to them if they want to work for free. However they shouldn’t deny assistance to a Water Point Committee just because they don’t have money.”

The ambiguity surrounding area mechanics can be confusing and could be viewed as a failure of policy (or its implementation). But, in my view, that conclusion would be overly simplistic and misses the point.

The co-existence of these different narratives, or interpretations of policy, leaves room for negotiation and pragmatism. These are arguably important ingredients for success, especially when adapting policies to local realities. In short, the role of area mechanics in Malawi’s water governance system is not yet set in stone.

More on my fieldwork in Malawi

This is the 3rd blog in a series about my fieldwork in Malawi. In my 1st blog I gave an overview of the set up around rural water supply. For my 2nd blog I describe about the role of extension workers in water supply.

In addition to my PhD fieldwork this blog draws on previous work by the authors under the UpGro Hidden Crisis project. Check out our report on the political economy of rural water supplies in Malawi.

The main image shows area mechanics working as a team. All images by Naomi Oates. Edited by Claire Moran.