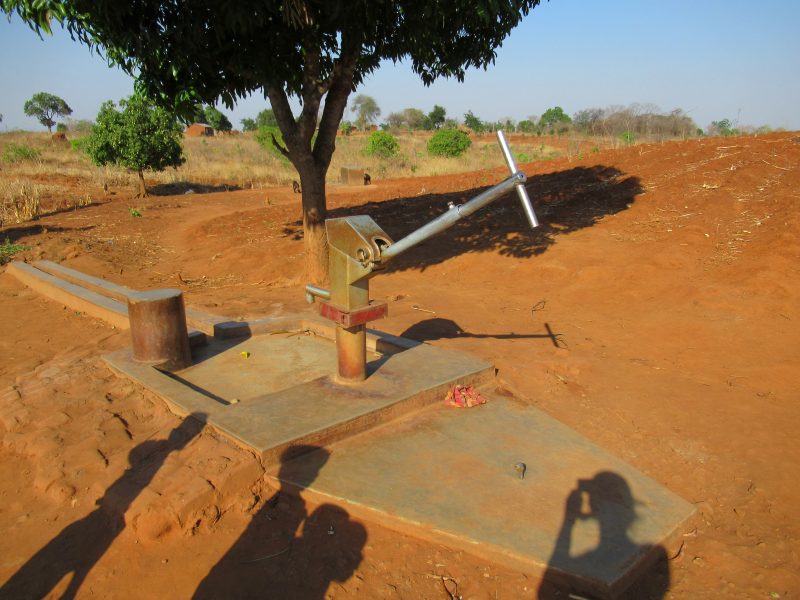 Grantham Scholar Naomi Oates is in Malawi investigating rural water projects. She’s interested in how policies, politics and water are entangled in everyday lives. In the 1st of 3 blogs, she describes the set up around water supply, including the environment, officials, charities and users.

My first impressions of Malawi? It is hot! Temperatures are reaching 37°C in Balaka district at the moment. Around midday it is particularly difficult to move around in the scorching sun. It is preferable to sit under a shady tree until the heat dissipates a little (usually it becomes bearable by 3pm).

The landscape is very dry. Sometimes there is a gentle cooling breeze, but that can also kick up a lot of dust. Fortunately, the rains will start in November, which will cool things down and allow the crops to grow. However, power cuts are a frequent occurrence at that moment, because the country cannot generate enough to meet demand. Generally hydropower is the main energy source, but reservoirs are at their lowest at this time of year. As a result, electricity has to be rationed. Water supplies to Balaka town are also suffering.

Why research the politics of water?

Overall, my research aims to understand the role of different actors at the district-level in developing and sustaining rural water services. Specifically, how they get their jobs done and the networks of relationships on which they draw. One aspect of this is to explore the interface between the district government offices and the communities they support.

Water is inevitably political. Behind the engineering and training manuals are a raft of different stakeholders, with various interests and ambitions. I want to make sense of this complexity, to understand how governance arrangements affect the sustainability of rural water supplies.

During my first week I have been settling in at the District Water Office in Balaka, getting to know the staff members. This will be my home for the next 4-5 months (with a break to return to the UK for Christmas). It is located just behind the market in Balaka town and has 4 rooms, plus lots of storage containers for equipment and spare parts.

I sit in the same room as the District Water Development Office – the boss – although he is often away for meetings. Around 49 staff employed by the office in total. Many are based at the treatment works and dam in Ntcheu (the neighbouring district) which supplies Balaka with piped water.

Currently, UpGro are investigating the multiple causes of waterpoint failure. Investigations look at the functioning of mechanical components in the hand pump. Plus they look at borehole characteristics (e.g. siting and yield) and various aspects of water quality.

Also, discussions are held with communities to discuss the history of the waterpoint. Talks include its construction, breakdowns and repairs, and local arrangements to collect fees and maintain the handpump.

Every waterpoint has a different set of problems. In the case of Alufeyo the community were contributing money for repairs, and showed willingness to pay. But the borehole has been badly sited and produces a low yield.

Ultimately, it is poor rural households that suffer when a waterpoint fails, particularly the women whose job it is to fetch water.

What next? More work on rural water projects coming up

Next week I will accompany one of the Water Monitoring Assistants on a Red Cross project. The team will be drilling and rehabilitating boreholes, and training Water Point Committees (community volunteers).

I’ve written 2 more blogs that look at what I’ve learned about rural water projects. In my second blog I’ll be talking about the role of extension workers in water supply. And for my third and final blog I’ll focus on extension workers.

The main image shows a waterpoint which households pay 300 kwacha a year to use. All images are by Naomi Oates. Edited by Claire Moran.