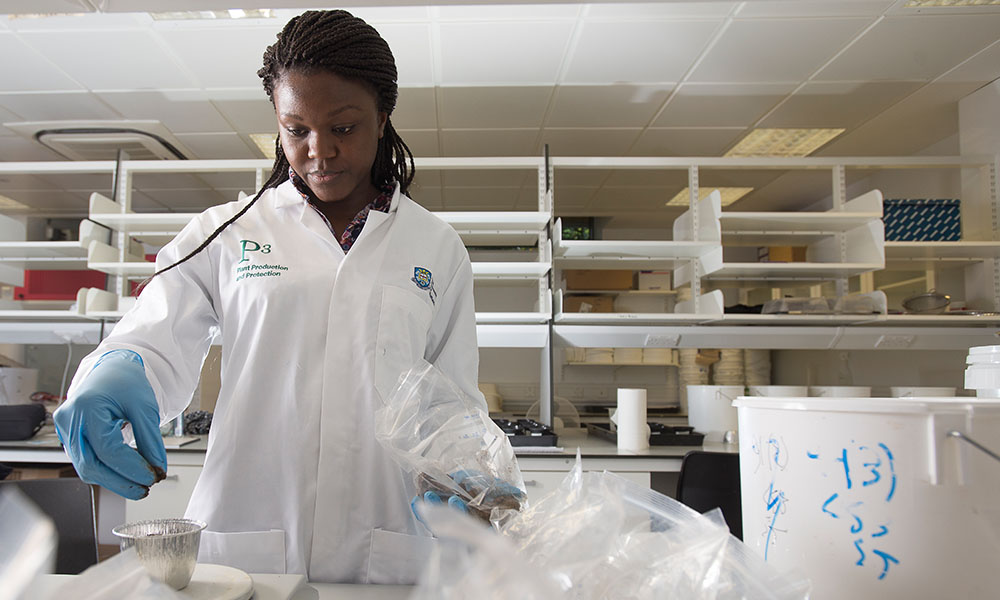 Journal Club was led by Grantham Scholar Emanga Alobwede who introduces the use algae as biofertilisers in agriculture.

The article I chose for Journal Club was Evaluating the potential of plant growth promoting cyanobacteria as inoculants for wheat. Its focus was on the use of algae as biofertilisers in agriculture.

Biofertilisers are beneficial microorganisms added to the soil to provide nutrients and make them available through various mechanisms.

The significance of algae as biofertilisers was first recognised in 1939, when De attributed the fertility of tropical rice field soils to the nitrogen fixing abilities of blue-green algae in the soil.

Algal biofertilisers have been used extensively in countries such as Spain, France, Ireland, Japan and other parts of Asia. All have recognised algae’s economic and environmental significance as an organic fertiliser.

Algae are a diverse group of organisms inhabiting a wide range of environments. Freshwater, marine and terrestrial and even hostile environments, such as hot springs and the Antarctic, can all contain algae.

They range from 0.2um in diameter (microalgae) up to beyond 50m in length (macroalgae or seaweeds). They are normally referred to as aquatic and photosynthetic organisms. And algae have simple reproductive structures, such as that of microalgae which possess unicellular/simple multicellular structures.

Algae are without roots, stems, leaves or vascular tissue as found in terrestrial plants. Cyanobacteria however, although also called blue-green algae, are classified as bacteria.

One of the big challenges of the 21st century is improving the way we produce our crops. We need technologies are environmentally sound and sustainable so we can feed the growing global population.

Biofertilisers are promising in this respect. They have been touted as an eco-friendly and sustainable way of replacing synthetic fertilisers, whose production is reliant on fossil fuels, which in turn contribute to greenhouse gas emissions.

Algae in particular have emerged as a suitable option for restoring soil fertility as well as enhancing plant growth and productivity. Plus their use as a biofertiliser can substantially limit the use of synthetic fertilisers.

Algal fertilisers could not only help in improving soil fertility through the increase of soil carbon and nitrogen, and through the aggregation of soil particles to improve soil structure. They also secrete extracellular polymeric substances which help bind soil particles together, as well as help soil overcome conditions of water stress.

Plus algae release plant hormones, which increase plant growth and therefore yield. And they release phytochemicals, which protect plants and allow them to develop resistance toward biotic and abiotic stress.

The paper we discussed week presents an example of an experiment carried out using cyanobacteria isolated from the root area (rhizosphere) of wheat crops.

However, in our discussion, several of the Scholars suggested there limitations in the study.

The effects of algal fertilisers on soil are usually residual rather than immediate: i.e. nutrients are not immediately provided to the soil but instead, they gradually build up and are usually available for subsequent crops. This a great advantage when it comes to maintaining soil fertility for longer periods.

However, despite the numerous benefits provided by algal fertilisers, there is a pressing need to understand this technology better so that it can be improved to become more readily available and reliable.

Nonetheless, algal fertilisers’ benefits mean it is worth promoting this area of research. And perhaps broadening the focus to other types of algae that also show promise.

Grantham Centre soil researchers come from across disciplines at the University of Sheffield to work on soil. From chemistry to social sciences, working all around the world, we have a diverse group of soil experts. Find out more: Soil research at the Grantham Centre.

Edited by Claire Moran. The main image shows Emanga Alobwede in the lab.