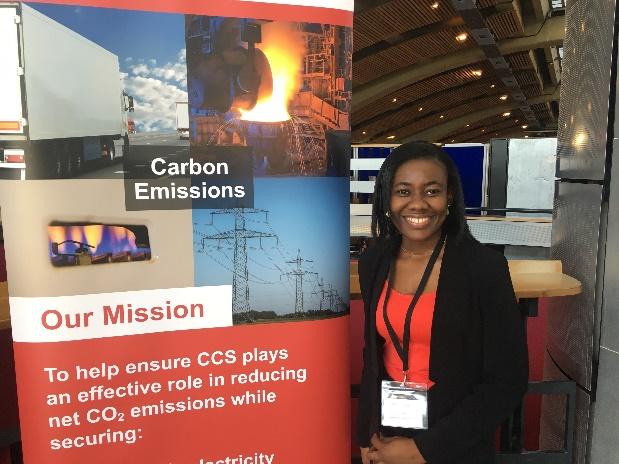 Grantham Scholar Gloria Mensah researches how carbon capture and storage (CCS) technology interacts with politics. Here she reports back from the UKCCSRC conference which brought CCS experts together from around the world.

It is a technology that involves the capture of carbon dioxide gas from power plants or industrial plants and its transport through pipes down into geological reservoirs where it does not affect the atmosphere.

In March 2018, experts working in CCS met at Cambridge University to participate in the UK Carbon Capture and Storage Research Centre’s (UKCCSRC) Spring Network Conference. The theme was ‘Delivering the New CCS Agenda’.

As I research the politics of CCS technologies, this was a good opportunity to meet academics, industry stakeholders as well as government officials to learn more and discuss my research.

Arriving in Cambridge in the early morning, I was met by sunny weather. Because it was my first time in Cambridge, I took time to soak it in. I can describe the scenery in Cambridge with just one word – beautiful! And green transportation is a common means of transport: everyone seems to be on a bike.

Delegates at the conference came from a wide array of fields. For instance, there were academic researchers from leading UK universities and research institutes. Joining them were government officials. I met people from Business, Energy and Industrial Strategy (BEIS) and Committee on Climate Change (CCC). Of course there were UKCCSRC members. Plus people from Carbon Capture and Storage Association (CCSA) and CCS campaign groups and CCS industry stakeholders, amongst many others.

Overall I looked forward to interesting discussions with a good range of perspectives on the CCS subject.

The first talk at the conference began was a view from Brussels. Speaking was Chris Davies (facilitator at the CCS Campaign Group). He talked about the EU policy making processes on CCS. Specifically, about how CCS has previously been prominent on the political agenda but now seems to be missing from EU policy agenda. Overall, he highlighted that more campaigning is vital to get CCS back on the political agenda.

Although there seems to be a strong motivation to develop CCS in the UK, progress is rather slow. Most projects remain in the development phases, requiring substantial government support if they are to be deployed at large-scale.

However, there is still some good news on CCS for the UK from government’s perspective.

The UK government’s 2017 Clean Growth Strategy Report sets out strategy for achieving its 5th carbon budget (reducing carbon dioxide gas emissions by 57% from 1990 levels by 2032). And it also includes a new agenda for CCS. The UK government made a commitment to deploy CCS at scale in the UK by the 2030’s.

Will Lochhead, the Head of Carbon Capture Utilization & Storage Unit (CCUS) at BEIS provided some insights into government’s new approach to CCS technology. He pointed out that government was committed to publishing a deployment pathway for CCS technology by the end of 2018, to define the steps for achieving the 2030 target. He also added that the government was committed to reviewing the delivery and investment models for CCUS. Plus they will organise a global conference on CCS to foster the UK’s international collaboration with other countries by 2018.

Global initiatives at the UKCCSRC conference

The conference also presented an opportunity to join panel sessions on either ‘Capture’, ‘Storage’, ‘Systems’ or ‘International’ aspects of CCS. Being an attendee at the ‘International’ panel session, this was a great chance to hear about progress on CCS activities in countries like Japan, Netherlands and the US.

An interesting overview was given of the Tomakomai CCS Demonstration project in Japan, a large-scale CCS project under implementation. Japan’s Ministry of Economy, Trade and Industry are running this project to showcase the viability of CCS from capture to storage.

Tomakomai plans to capture 100,000 tonnes per year or more of CO2 which will then be injected and stored in offshore reservoirs. CO2 injection has been ongoing since April 2016. The speaker noted that since the facility is located a few centimetres from the city, extensive public engagement was involved.

Public outreach activities included providing comic flyers for kids which explained CCS in cartoons, which were great! They also organise tours at the facility for children in primary and secondary schools. And they provide a forum for Tomakomai citizens to gain understanding on CCS technology.

Listening to the ongoing deliberations, the issues that surround the implementation of technologies such as CCS became very clear to me. Most importantly, advancement in research and technology alone is not enough for a technology to emerge.

It is crucial that scientists, academics and industry stakeholders gain an understanding of the policy making process so that they can effectively engage. On the other hand, policy makers need to stay abreast with science and research to inform their decisions. Public outreach represents a core strategy underpinning most successful strategies and it is important that the most suitable approaches are adopted. Perhaps, we can take a cue from the people of Tomakomai!

On the whole, the conference provided good educational exposure and an opportunity to learn and network. And lest I forget, the organization of the event was top-notch! We took regular breaks where nice meals were served. I really had a lovely time in Cambridge and I am looking forward to the next UKCCSRC conference!