At this week’s Journal Club, chemist and Grantham Scholar Nicholas Moody introduced his fellow PhD students to the importance of enzymes in photosynthesis, and the implications that a deeper understanding of them may have on food security.

‘Rising atmospheric carbon dioxide concentration and the future of C4 crops for food and fuel’ by A. D. B. Leakey 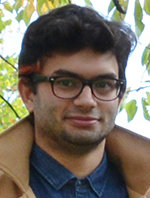 Rice is a crop that feeds almost 90% of Asia – the problem is it wastes a lot of water in the cultivation process. There is, however, a group in the Philippines attempting to make rice adopt a more water efficient form of photosynthesis known as C4. Similarly, the goal of my own project is to understand how an enzyme that contributes to C4 plants’ efficiency by locking in C02, came to evolve.

I chose the 2009 paper, ‘Rising atmospheric carbon dioxide concentration and the future of C4 crops for food and fuel’, because it gives context to my work which, compared to other Grantham Centre projects, can seem somewhat inaccessible. My work is part of the C4 rice project but C4 photosynthesis is actually present in over 40% of world food crops, not just rice, as this review paper shows. The paper looks at the effects that the Earth’s changing CO2 concentration is having on C4 crops.

With normal (C3) plants and crops the pattern is straightforward: as CO2 concentration increases, the chances of side reactions (such as photorespiration) are reduced and so photosynthesis is more efficient. The downside is that with elevated CO2 concentrations come increased temperatures due to the greenhouse effect, so droughts are more likely to occur.

C4 plants, on the other hand, are already very efficient at stopping negative side reactions, regardless of CO2 concentration. They do this by creating their own artificially high concentration of CO2 around the enzymes involved in photosynthesis. This means that a C4 plant has less of a demand for CO2 and so it can keep its leaf stomata (the tiny pores that soak up gases) closed for longer: this in turn helps prevent water being lost through the stomata due to evaporation, minimising the risk of drought that other plants face.

The paper supported the idea that C4 plants are better in subtropical conditions. As a review paper, the scientific grounds for the work are strong as it brings together a number of original papers, and the authors have scrutinised their sources to provide factually balanced information. This meant that when the Scholars discussed the paper, their comments related less to the quality of the science and more to how the science was integrated into the ‘bigger picture’ of food security (as well as how my work in enzyme chemistry fitted into it too).

We discussed in detail how the activity of enzymes was related to plant physiology (that is, the chemistry of the plant cell), and how enzyme activity can be controlled by the molecule present in the plant system. Scholars from more of a social science background wanted to discuss C4 photosynthesis, how it worked and how important the enzymes are in the system. This talk progressed to how the C4 system evolved, a subject that is touched on less than others across biology more widely, and which is still to be fully investigated by scientists.

This meeting was more informal than other Journal Club sessions, but the Scholars who came gained a greater understanding of the C4 process, its place in biology and the underlying reasons why there is such a great effort through projects like mine to engineer this process in rice.