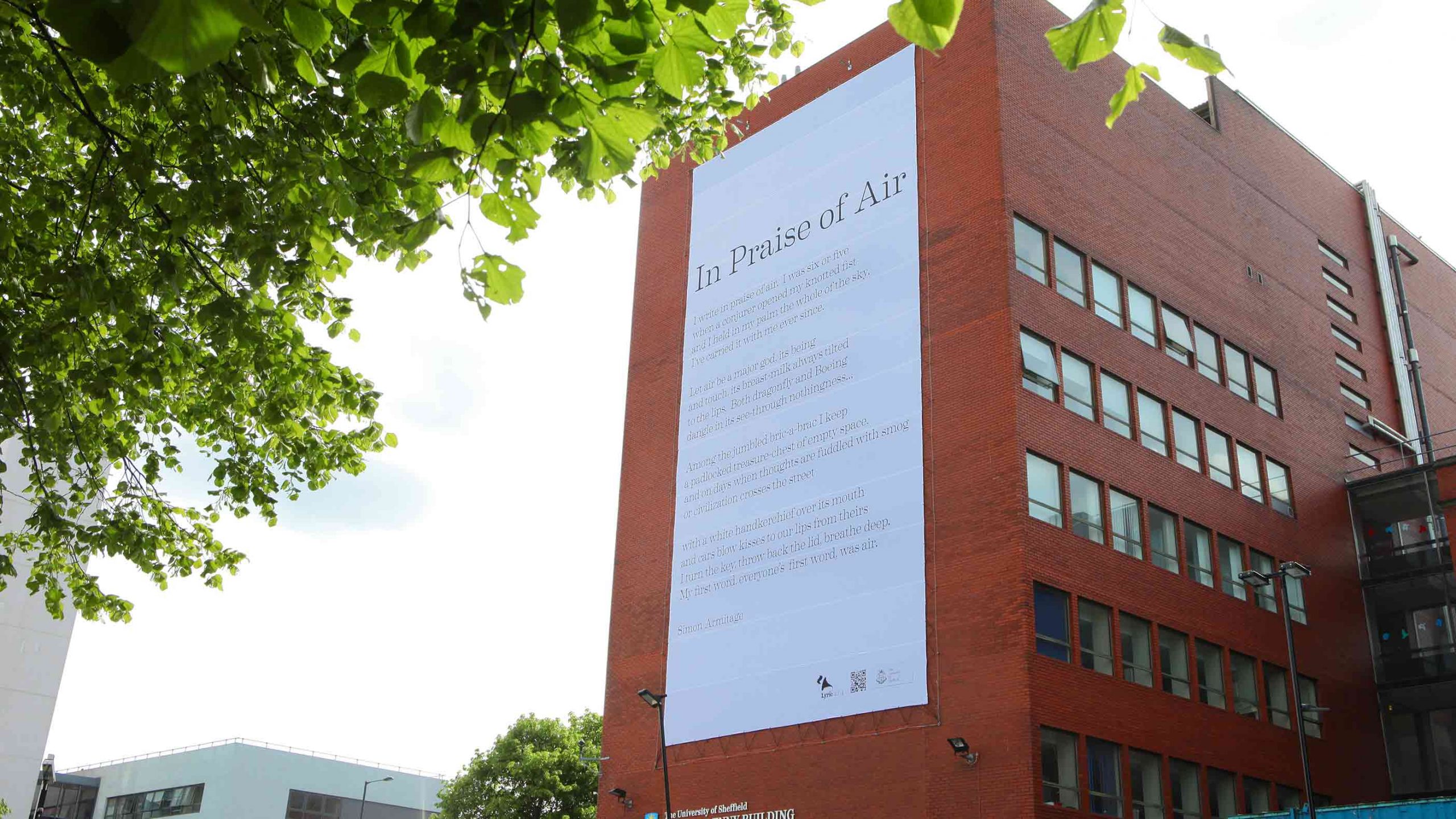 The world’s first catalytic poem has been removed from the University of Sheffield, 3 years after it was installed. In Praise of Air was written by Simon Armitage as part of a project with our director Tony Ryan. Here Joanna Gavins explains more about the work.

The poem was printed on a banner 20 metres in height, coated with titanium dioxide (TiO2). When light shines on this photocatalyst, the electrons in the material are rearranged and become more reactive. They break the oxygen in the air apart to make 2 oxygen-free radicals. In turn, these react with water to make peroxide, which oxidises pollutants in the atmosphere, making harmless molecules that can be washed away.

In the time that In Praise of Air hung above the busy A57 in Sheffield, we estimate that it removed around two tonnes of nitrogen oxide (NOx) – the toxic gas emitted in exhaust fumes which causes lung disease – from the surrounding environment.

But the air-cleansing properties of the banner were not the only reason that the catalytic poetry project was important. In Praise of Air was a unique, creative collaboration across the traditionally rigid boundaries between the arts and the sciences. Our main aim as a project team was to break down these barriers and to use poetry to give a fresh perspective on the problem of air pollution in our inner cities. This is because we believe that the solutions to environmental challenges such as air quality lie not just in the sorts of technological advances that the sciences can produce, but also in the power of the creative arts to inspire people, to alter perspectives, and to change minds.

Finding new ways to engage in meaningful dialogue with the general public about environmental science is critical in the present climate. The new US president has stated his intention to withdraw his country from the Paris accord, and a general mistrust of academic experts, and particularly scientists, is apparently becoming ever more pervasive.

A further challenge exists in the fact that a more sustainable future for the planet depends to a great extent on its populations adopting technologies and behaviours that are fundamentally altruistic in nature. Recycling plastic waste has no immediate impact on the individual doing the recycling. Turning down your central heating by a couple of degrees can actually reduce your comfort in the immediate term. Switching to a hybrid car is an expensive prospect for most. The sacrifices continue. But all of these individual altruistic choices have the potential collectively to have a massive beneficial impact on our planet and its sustainability.

Science cannot ensure a sustainable future for the world’s population on its own. A multi-disciplined approach – one which draws researchers and practitioners together from across a range of different backgrounds – is needed to tackle a complex and multi-faceted set of problems. In joining forces, artists and scientists not only increase their imaginative capacity to think up new solutions to the world’s environmental problems, but they have the opportunity to harness the potential of the arts to provoke and persuade people into adopting more pro-environmental behaviours.

Surprisingly, perhaps, this is not as difficult as one might think. Just a little imagination is needed to begin to overcome the entrenched separation of the arts and the sciences – a separation which is embedded in our education system from primary school onwards. In the case of the catalytic poetry project, all it took was for me to introduce a polymer chemist to a poet in a pub in Sheffield during the Lyric festival of poetry and music in 2013. Once Simon and Tony started to share their ideas and formulate a vision for their collaboration, most of the rest of the practicalities took care of themselves.

Based on my experience of leading the catalytic poetry project, this is because artists and scientists share two essential traits. The first of these is curiosity: an insatiable drive to ask difficult questions of the world around us and an inability to apprehend that world at the surface level alone. Both scientists and artists are characterised by a need to look ever deeper, to discover, to understand. And for both disciplines, the asking of questions is only the start of the process, because the second trait which defines both scientists and artists equally is creativity. For a poet as much as for a chemist, questions exist as catalysts for new thinking, new expression, new invention.

Truly difficult questions, such as how we achieve a sustainable future for the earth and its 7.5 billion inhabitants, require the greatest levels of creative thinking, not just by academics but by the general population more broadly. It is only by working together, by collaborating across boundaries and borders, that we access our full potential to create positive and lasting change.

Joanna Gavins is a Professor in English Language and Literature at the University of Sheffield. She is also a member of our Many Happy Returns team.

This article about the world’s first catalytic poem was originally published on The Conversation. Read the original article.