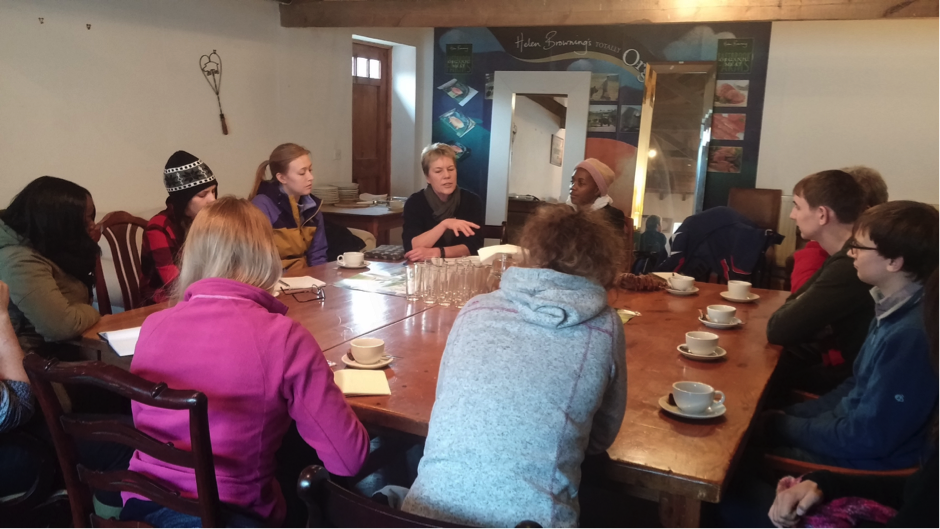 After her talk at our annual symposium 2016, Helen Browning OBE invited a group of Grantham Scholars to visit her organic farm. Grantham Scholar Roberta Fabrizi reports on the trip.

Helen Browning’s Organic is a 1,400 acre farm in Bishopstone, Swindon, run by Helen Browning’s family since 1950. The farm has been 100% organic for about 30 years and is certified by the Soil Association. It produces 3,500 pigs a year, as well as milk, beef. And more recently they have been making mozzarella, with the help of a team of Italians. The farm also runs the local pub in collaboration with a brewery. At the pub they provide fresh organic produce.

The farm has 12 employees which, I learned during our visit, is high compared to conventional farms, but reasonable in relation to the farm size and the variety of products and activities undertaken.

As well as being an organic farmer, Helen Browning is Chief Executive of the Soil Association and Chair of the Food Ethics Council.

Our visit starts with a chat around the table.

Helen tells us about the history of the farm, its different purposes, and future projects. Among these, she is particularly keen to talk about an ‘agroforestry experiment’. For this she will try to integrate fruit and crop production together with farming practises, using the land on 3 different levels.

After the general introduction, we went outside to visit the calves and their ‘foster moms’.

Helen is experimenting with new ways to raise calves. Instead of separating them from adult cows, they are nursed by older cows or first lactation dairy cows. The latter have been shown to benefit from a smoother transition to conventional milking (twice a day). And the calves have a chance to build ‘social bonds’ other than ‘adult supervision’.

Connected to the milking process, Helen says that she plans to start another group of dairy cows that will be not only living with their own calves, but will be milked only once a day.

After lunch we took a tour of the farm landscape. We hiked up the hill and, as we watched red kites flying by, Helen explained how the farm is structured so that the wildlife has corridors to get from one edge of the field to the other.

We visited the sows and as I struggled to walk on the muddy ground (I like to think it was my shoes) we learned that clay and organic matter content varies in different parts of the farm. Plus the permanence of pigs in the field increases yields during the following harvest season.

Something that impressed me is the circularity of the farm’s economy and processes. One of the few ‘externalities’ is sewage management which, at the moment, cannot be used as a fertiliser.

Not back to basics but getting the basics right

After the tour, we went back to the table to talk about our impressions and ask questions.

When asked if organic farming means going ‘back to basics’, Helen answered that it is not. As I think of the portable ultrasound scanner that I saw being used in the fields to separate sheep pregnant with triplets from the others (so that they can be transported to richer pastures), I have to agree.

Instead, for Helen “organic farming is not about going back to basics, it’s about getting the basics right, and that often means taking care of the soil‘. In my own words: it’s not about looking back, but looking down (at the muddy ground I struggled to stand on!)

We talked about the advantages of organic e.g. animal welfare, wildlife, soil health. But we also discussed what still needs improvement.

Secondly, the picturing of organic farming as a niche for a ‘privileged’ group of consumers.

As my PhD is about genetically modified organisms (GMOs) and the debate on genetic engineering practices, I could not help but comment on the relationship between organic farming, and new plant and animal breeding technologies, such as gene editing.

GMOs and gene edited crops can be fundamental in feeding the planet. But my main takeaway from this visit is that we can’t forget about good farming practice. Crop rotation, waste reduction and carbon footprint, as well as preservation of local biodiversity ought to be taken into account in the future of agriculture and farming.

The main image shows Grantham Scholars with Helen Browning at her organic farm in Swindon.