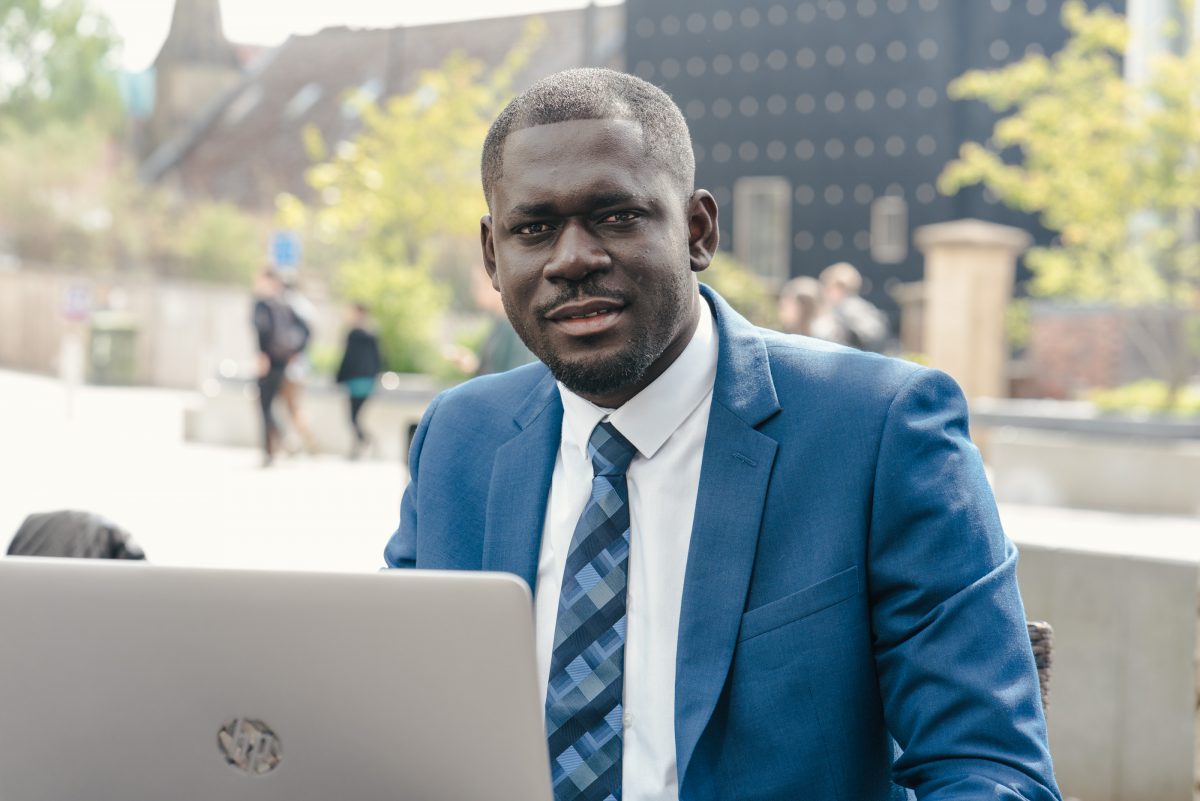 George Asiamah’s research into Brexit, food and science points to changes to food safety due to Brexit. In this interview we talk ‘chlorinated chicken’ and antibiotics. Plus George explains how growing up in rural Ghana got him interested in Brexit.

George: Regulatory science is a distinct body of science that focuses on generating evidence, mainly to support policy decisions.

For my research I am looking at the people and institutions that generate evidence to support agri-food policy-making in the UK. And I am interested in how Brexit will affect the broad evidence brokerage mechanism.

Why did you choose Brexit as a topic for research?

George: Growing up in a rural community in Ghana, I had first-hand experience of many developmental challenges. My preoccupation was how to help my community to come out of its precarious situation. So after I studied economics at university, I then did a Masters in sustainable rural development.

But during my Masters, I didn’t focus on Ghana. Instead I situated myself in a global context and sought different perspectives from the developed world. I specialised on EU policies, especially CAP and CFP, focusing on rural Northern Ireland. Consequently, when Brexit came along I couldn’t resist studying it! Because Brexit is a chance to study policy change as it happens. And to see how this affects people.

Moreover, understanding UK institutions and institutional changes will help me to effect the changes I intend to make in my country.

Will Ghana be affected by Brexit?

George: It is interesting to observe how Brexit has a knock-on effect on even the rural economy of Ghana. Ghana is part of the Commonwealth and it’s been suggested that new trade deals will be forged there. Nigel Farage says the Commonwealth are our genuine friends and allies in the world!

With 28% of the UK’s agri-food currently coming from Europe, new trade with Commonwealth countries will be necessary to fill the deficit. In other words, a rural farmer in Ghana may be essential to fill in the gap.

On the flip-side, decisions taken by a rural farmer in Ghana will have a knock-on effect on the long term sustainability of the UK’s agri-food supply chain. This shows how the global political economy is intertwined: what happens in the UK affects the rest of the world – and vice versa.

Issues to do with Brexit, food and science have made the news recently, for example in worries over so-called chlorinated chicken from the US. What can you tell us about this?

George: This all arises from differences in regulatory standards between the EU and the US.

The EU has one of the strictest and highest food standards in the world, covering food safety, the environment, animal health and welfare. Compared to the US, the EU is more cautious about the use of novel technologies, additives and chemicals in food production. And the EU uses the precautionary principle more often – ‘when in doubt ban or restrict the use’ of the effects of the technology or the chemical.

Over the past three decades the UK has operated within the EU regulatory regimes. Now it is leaving the EU, the UK has the opportunity to continue aligning with the EU standards – or diverge towards the US.

And the US, in the ongoing trade negotiations, is imploring on the UK to remove the restrictions on certain products which have been banned or restricted in the EU.

And what are the big issues coming out of this ‘EU vs. US’ trade situation?

George: Three major food standard issues have emerged. They are: Pathogen Reduction Treatment, hormone-treated meat, and antimicrobial (antibiotic) use. In all three cases, UK farmers stand at a competitive disadvantage, should the import of foods (of lesser standards) be allowed from the US or other countries.

Pathogen Reduction Treatment is related to the ‘chlorinated chicken’ controversy?

George: Yes. Since 1997 the EU has banned the use of certain Pathogen Reduction Treatment (PRTs) substances, including the use of chlorinated water, for rinsing meat products. However, the US has on several occasions said the EU ban is not based on scientific findings.

In turn, the EU insists sanitary practices during production and processing are more appropriate to pathogen control than over-reliance on PRTs.

It is not yet clear whether the UK will allow the importation of chlorine-treated chicken as part of the trade negotiations or not.

George: Another issue is the EU prohibition of the use of substances having a hormonal action for growth promotion in farm animals. The EU ban covers six growth promoters which have been approved and used in the US, Canada, Australia, New Zealand, and Japan. Further, the US and Canada contested the ban at the World Trade Organisation (WTO) – challenging the EU’s risk assessment. Then in 2008 the WTO issued a mixed ruling. As a result of this ruling the US can continue its trade sanctions and the EU can maintain its ban.

Similarly to chlorine-treated chicken, it is not clear whether the UK will lift the ban post-Brexit.

And the last issue is antibiotics?

And it is again unclear if the UK will follow suit or go the way of the US.

You’re researching one of the biggest news stories of our time – Brexit. But you’re also living through something which has eclipsed everything else – the pandemic. Has Covid-19 affected your research?

George: I’m currently interviewing stakeholders in the agri-food sector, such as farmers, consumer groups, supermarkets, policymakers and scientists. It was to be in person, but now they are all taking place online. And unfortunately some of the people I was due to talk to have been moved abruptly to working on Covid-19 policy and are too busy to talk to me.

More importantly, everything to do with Brexit has been interrupted. Brexit negotiations should have been completed by now. But attention has of course shifted from Brexit to Covid-19.

Some say that trust in experts has increased due to Covid-19 – do you think this is true?

George: It is hard to tell. It is something that I am looking out for in my interviews. Because, when it comes to the utilisation and integration of scientific evidence in policy decisions, trust is very important. There needs to be trust in experts and scientific agencies – not just from policymakers – but from all stakeholders and the public at large.

Has the way the UK responded to Covid-19 changed the way evidence makes policy? That is, will it make it quicker as some sustainability experts hope?

George: This pandemic is an emergency, and so falls in the realms of ‘post-normal science’. There is uncertainty about the facts being generated, but we don’t have the time normally available when translating evidence into policy. Decisions need to be made very quickly. However, this is an exceptional situation and doesn’t follow the normal policy decision-making process.

For a country to be successful in dealing with such situations, it needs to have very proactive scientific advisory structures, and not just be reactive. The UK’s response has revealed some loopholes in its advisory system, with some experts complaining of being sidelined.

You have written about making policy in a post-truth era. Why do you think people elect leaders who are blatant about their vested interests?

George: This is populism! These people speak not to facts but tell people what they want to hear. This is true around climate change, for instance, denying it appeals to emotions. People are being voted in who deny existing evidence.

That is why I believe that scientists need to engage more with the public directly, and not just policymakers. Politicians listen to the public more, so this can be a way to influence policymakers. This is why outreach and engagement are so important.

Your paper on pro-poor development was really interesting. Climate change and biodiversity loss tends to affect the poor worst. But development can be bad for the environment. Is there a way through this?

George: Yes, this is the paradox of sustainability! People, especially the poor, tend to focus on economics above all else – on the short term economic gains. They do not see that nature and the environment affect economics and other aspects of life. They forget that destroying nature will affect productivity in the near future. It is all related: the economic, social, and environmental – and we need to educate the public to understand these relationships.

However, you can’t tell people to practice ‘green’ when they are living in ‘red’. Given the option to choose between the environment and bread, the poor will always choose bread. As a result, development policies must focus on empowering people to live beyond the subsistence level, so that they can think beyond the present.

We need to empower people to think about the future and not just the short term.

Do you have hope for the future?

George: I am optimistic. People are getting to know the broader picture. For example, at the Grantham Centre, we have a huge community of diverse people looking at what we can do and what works. We share evidence and we influence policy. And especially in Africa, there is a whole new generation of young researchers doing amazing work.

I believe in the ‘bottom-up’ approach. For instance, in Ghana, I do a lot of community engagement. And I know that in no time people will begin to embrace our message and put it into practice.

What will you do when you leave the Grantham Centre?

George: Next for me will be an international development organisation – UN agencies, the World Bank or the OECD. I am fascinated by addressing poverty and incorporating sustainability in development policies.