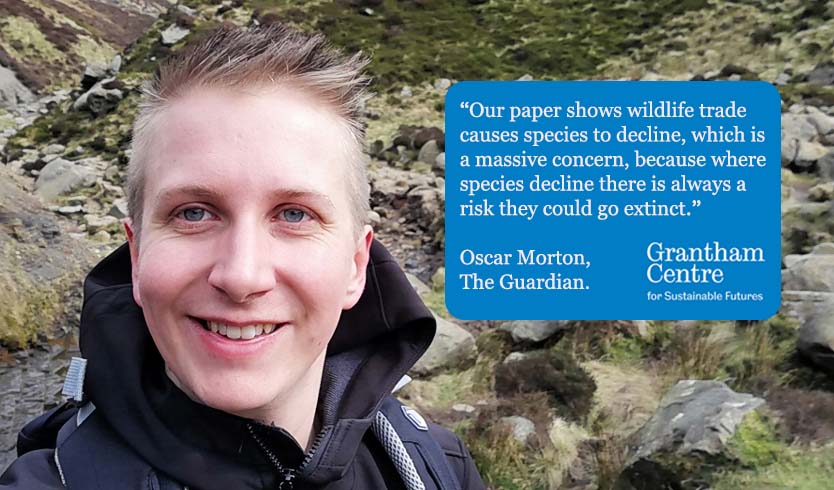 Grantham Scholar Oscar Morton‘s wildlife trade research featured in The Guardian. Oscar’s work is important because it’s the first analysis to quantify the impact of the legal and illegal wildlife trade.

Summarising the findings, the Guardian reported that wildlife populations decline by an average of 62% in areas where species are traded. Unfortunately, this pushes some closer to extinction.

Oscar, who was lead researcher, worked with an international group of researchers, including his supervisor David Edwards. The Guardian quoted Oscar as saying: ‘Our paper shows wildlife trade causes species to decline, which is a massive concern, because where species decline there is always a risk they could go extinct.’

Oscar’s wildlife trade research in The Guardian and other media

If you want to read the full wildlife trade research story in The Guardian article, then look here.

The University of Sheffield also featured this story.

This research was also reported in The Hindu.

And the Daily Mail picked up the research too.

On Twitter, Oscar explained his results and cautioned that more work was needed on the impacts of trade. If you want to find out more, then follow this thread on Twitter  ↓

So the first paper from my PhD came out today. A meta-analysis of the abundance impacts of species extraction for commercial use (or wildlife trade). A thread 1/n https://t.co/8tsvfsgFUv