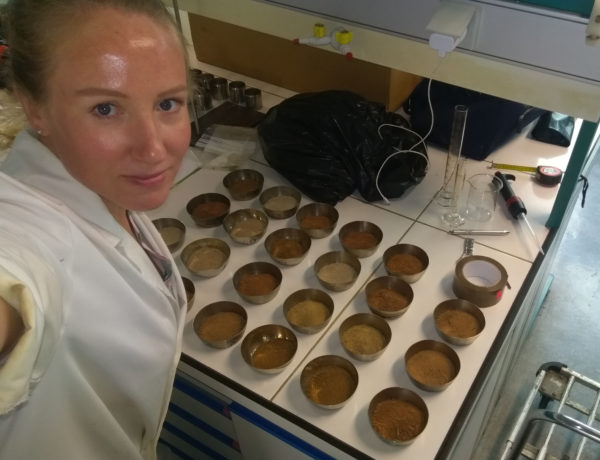 Grantham Scholar Jenny Veenstra is a soil scientist on a mission to make us appreciate the wonder of soil. For UN World Soil Day she asks us to consider soils as entities rather than a set of properties.

I am an environmental soil scientist and I have been lucky enough to travel the world working with soils. It is my profession to unveil secrets hidden beneath the surface. Due to my training and life experience, I have developed a particular relationship with soils, which has led me to define soils in an equally distinct way.

We should define soils as entities. In this way we can recognise soils’ existence beyond the many benefits they provide to people. It is an invitation for soil scientists to acknowledge other perspectives on the subject of their work and to widen their understanding of soil. I believe that recognising soils as entities – instead of objects, substrates, resources, etc – sets the stage for conservation.

One soil, many definitions

We all have our soil memories, some may be actively formed from exploration, others from simply moving around on it. I am a strong believer that knowledge grounded in experience truly counts as knowledge. So each of us can come up with our own definition of what a soil is, based on our unique relations with it.

I grew up on the sunny island of Ibiza. Mentioning Ibiza possibly evokes a memories, especially to tourists! But I am talking about soil memory specifically. For me, soils in Ibiza mean the smell after the storm in the pine forests, or the dust in the warm, red, ploughed fields. Thinking about Ibiza’s soil conjures up an island of singing cicadas, white rocks made of thousands of shells, and white houses painted with quicklime. It takes me back to sandy biscuits in an imaginary oven my childhood garden. What are your soil memories?

Scientists in different disciplines have different relations with soils, which have developed from soil definitions based mainly on function. For an agronomist, soils will be the porous media that provides appropriate conditions, water and nutrients for crops to grow; whereas an engineer will define soil as the physical base for constructions. For an archaeologist soil is the material that preserves remains, for a biologist it may be a gene pool, and for a climate change modeller it’s a carbon stock. All these are valid definitions which are true.

One soil, one entity

For me, soils are much more than what we do with them or for what we use them for. Soils are entities. They  come to be, develop, transform and can degrade. Soils are the result of the interaction of parent material, climate, organisms, location and time. Any difference in just one of these factors will result in a different set of soil properties, in a different entity. Accordingly, we cannot treat all soils as if they were the same.

You might think that this is a very basic thing to say, and that no one really treats soils as if they were a uniform blanket spread over the landscape. You even might have come across different types of soil, such as clay or peat soil. Have you ever given soils particular names? Farmers do. They distinguish soils by properties that affect soils’ work-ability or crops’ development.

Farmers may, for example, have a name for gravelly soils. Or they may draw a distinction between soils with good or bad drainage. Like scientists, farmers distinguish between soils depending on their properties.

When asking farmers what the ideal soil looks like, one of the answers I got was, ‘the one that is easy to dominate’. This comes clearly from a food production mind-set, in which soils are the media that provides the conditions for crops to grow. In a controlled, farmer-dominated system it is less complicated to make sure that plants’ demands are fulfilled.

But luckily soils are quite savage, they make themselves known, they make us think about them. I say luckily, because of how human priorities work. If we focus on one thing, we neglect the others. So if we focus on soils’ productive function, we forget all the other work soils do on Earth. For this reason, I argue in favour of conceiving of soils as an entities, with independent capability to do things under our feet, out of our human control. We should avoid discourse in terms of bending these entities to human will, which leads us to transform them, often in harmful ways, such as soil degradation.

Some time ago, my boss in my previous workplace got a phone call, asking if it was possible to create a synthetic soil. She got very irritated, said “that is impossible!” and hung up the phone. She looked at me and asked: “Can you believe this?”

Who knows which soil memories came into play. But I bet that for my boss soils are entities, even if she is an agronomist! This has little to do with the technical possibility of creating a media that allows crop development, we have all heard about hydroponics. At the Grantham Centre Harry Wright is developing soil-less soil to grow crops in places with nutrient poor earth. But Harry’s soil can never really be soil.

Recognition of soils as independent entities enabled the creation of a science in its own right. My favourite science: soil science! But it has not been until recently that soils have gained momentum in general debates about food security, biodiversity, climate change and other major global issues.

We soil scientists are not completely blameless in messing around with the concept of soils. We dis-aggregate soil science into multiple sub-disciplines, and in so doing, split soils into multiple components!

Moreover, we go to the fields, take some superficial samples, manipulate and analyse them, and finally publish results – forgetting, in many cases, to mention not from where but from whom these samples came. Let’s keep it together! Because by doing so, we spread the message that the set of studied properties we call ‘soil’ pertains to a very unique, very particular entity.