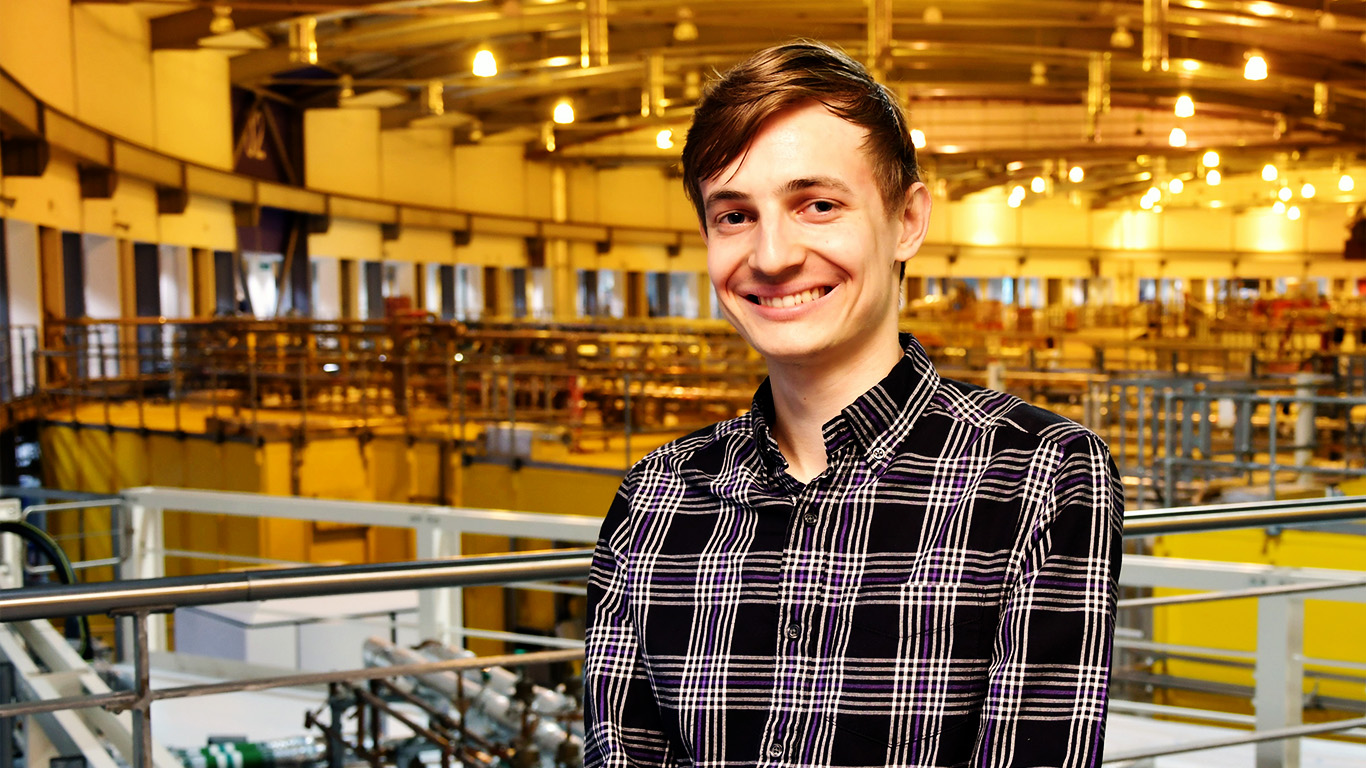 What is a synchrotron? In this blog I’ll explain what a synchrotron is, how it works and what we do with them.

I am Martin Appleby a Grantham Scholar at the University of Sheffield. Before I started my PhD, I did a placement on the beamline I24 at Diamond Light Source. Diamond is a national research facility in Oxford – and the location of the UK’s synchrotron. During this placement I helped a team developing Serial Synchrotron Crystallography. And I also helped to write three journal papers based on my work.

What is a synchrotron?

A synchrotron is a particle accelerator, kind of like CERN.

However, rather than collide particles into oblivion, as they do at CERN, synchrotrons generate bright light. This light is known as synchrotron radiation. It is composed of X-rays, infrared and ultraviolet light. Synchrotron radiation can be used to investigate tiny objects, like atoms, molecules and proteins.

The starting point of a synchrotron is an electron gun. It sounds like it should be in a science fiction film, but an electron gun is a real thing. It is similar to a cathode-ray tube used in old-fashioned TVs.

An electron gun fires an electron through a linear accelerator and a booster ring – which speeds up the electrons using magnets. Electrons are now moving at an incredible speed – fast enough to go around the world 7.5 times per second, or 2.7 million times faster than Usain Bolt!

The booster ring is made of straight sections and bending magnets. Radiation is generated as the electrons pass through the bending magnets. Diamond also uses insertion devices which are magnets that wiggle (the scientific name!) electrons causing brighter radiation to be produced.

This radiation is directed into beamlines for use.

What is a beamline?

A beamline is where the scientists work and it is made up of 3 parts: an optics hutch, experimental hutch and a control room.

Diamond currently has 33 beamlines, all running different experiments for their users!

Why do you need a synchrotron?

Every science, from geology to physics, has experiments that can be conducted at a national facility like I24. And there are many experiments that require the intense light generated by a synchrotron. This is because the light produced can be up to 10 billion times brighter than the sun. Light like that allows us to study things such as atoms and molecules in great detail.

Whilst I was at I24 we used a synchrotron to study small molecules known as ligands that were bound to the active sites on proteins. By doing this, we can discover new medicines to tackle disease. This is just one example of the many experiments that can be done at a synchrotron.

Crystallography studies the structure and properties of crystals. These crystals are grown, similar to crystal kits you can buy in a shop. And crystals can range from chemicals to proteins, but you need different conditions to study different types of crystals.

For example, at I24, we study Macromolecular Crystallography (MX). MX is the study of proteins. By doing this we are able to work out the structure of the protein, and additional information, such as ligand binding.

Using the information from MX we can do useful things. For example, drug design by designing ligands to bind to the active sites of the drug.

MX also allows us to study how a variety of proteins work, like ones that reduce CO² or cause jellyfish to glow (which won the Nobel Prize in chemistry in 2008!).

In traditional MX, we shoot a singular crystal to discover protein structure. X-rays are bright and powerful. During MX, we normally have to cryo-cool the crystals down to very low temperatures (sometimes lower than 100 K or -173.15 .C) to minimise damage to the crystals. The X-rays can cause damage and they can also alter the protein structure.

Or, we can use serial synchrotron crystallography (SSX) instead.

SSX allows us to shoot thousands of crystals very quickly at room temperature (in this method, ~25600 in 15 minutes). As a result, we can observe the effects of radiation on the protein structure and also observe polymorphism (where proteins have multiple different structures).

What is this technique used for?

You may be asking, but why go to the trouble? Well, there are many things we can observe using SSX, but similar to MX, one of the most important is ligand binding.

Ligand binding in proteins is where a small molecule attaches to the protein, and sometimes a reaction takes place. This can be incorporated into drug design.

The method developed an I24 uses a ‘chip’ sample holder which has a chessboard like distribution of sample wells. Because of this, we know the exact locations of the crystals in the wells and this allows fast motorised stages to put the crystal in front of the beam.

Watch this video and see how this works.

The work on I24 I helped with focuses on one specific method of carrying out SFX. There are many others, including firing jets of crystals through an x-ray beam and using acoustic waves to drop crystals at set intervals.

This technique can also be translated to other facilities, such as X-ray Free Electron Lasers. These are larger (the European XFEL is 3.4 km) and more powerful linear accelerators than synchrotrons, with a better time resolution. They can be used to get more detailed structures and observe faster structural changes.

What is definite is that these techniques will be useful to scientists across all subjects for years to come.

My time at Diamond inspired a love of time-resolved techniques and for my PhD, I frequently work with time-resolved IR. I conduct this research at the Lord Porter Lab at the University of Sheffield.

At Diamond I worked with a large group of scientists. The work I contributed to has been written up into 3 papers. If you’d like to read them, follow the links below ↓