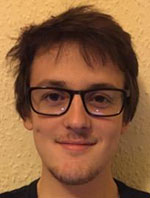 Grantham Scholar Dr Guy Mayneord is currently a scientist at Cambridge Display Technology. At the Grantham Centre he used Atomic Force Microscopy to observe the molecular arrangements and interactions behind energy capture.

Find out more about AFM in this video.

In 2016 Guy helped organise a panel debate with experts Clean Power for All as part of our Scholar outreach programme. You can watch this on our YouTube channel.

At another Journal Club – led by Professor of Soft Matter Physics Ashley Cadby, Guy’s supervisor – funding for science was the topic. Read: By accident or design: how should we fund science? By Guy Mayneord.

In 2015, Guy Mayneord and Oleksandra Korychenska represented the Grantham Centre at a University of Sheffield alumni event at The Royal Society. The evening’s discussion the ‘energy conundrum’ took place as Grantham Centre experts arrived in Paris for COP21. Here, Guy looks at the issues raised. Read: The energy conundrum with TUoS alumni at the Royal Society by Guy Mayneord.

You can find Guy on LinkedIn.

Stay up to date with Guy Mayneord and the other Grantham Scholars: join our newsletter.