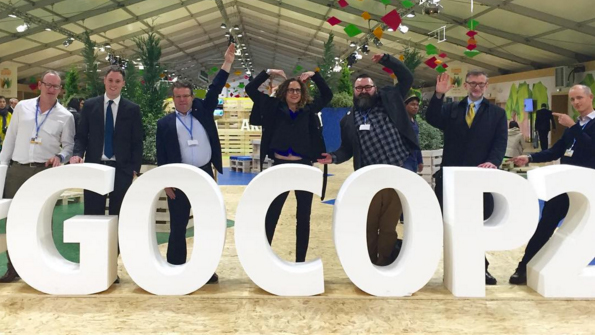 Grantham Scholar Rob Hardie was an official observer at COP21. Here Rob sets out how Ostrom’s theories about overcoming the tragedy of the commons were proved true by the creation of the Paris Agreement.

Tens of thousands of people cram into event halls and present to each other. And then they convene with the aim of coming to a global agreement on how to mitigate our impact on the climate. Overall, I’m hopeful about what I saw: the Paris Agreement being made.

But it’s not just that it was made, but how it was made that gives me hope.

How best to use common-pool resources

Before leaving for COP21, I was researching incentives for action on climate change. One of the theories I can across was about the ways in which people collectively use common-pool resources.

Common-pool resources are resources to which people have communal access. For example a lake or ocean used for fisheries. Or a savannah system where cattle is grazed. Or even an atmosphere used for the expulsion of carbon dioxide.

What is the tragedy of the commons?

The first mainstream theories of common pool resource use said that in situations of poor or absent resource regulation, resources will be exploited to – and over – their sustainable limit by self-interested users. And this leads to what has been called the tragedy of the commons.

When every other user of a resource exploits it to serve their own interests, then why not expand fisheries, graze more cattle or further expand a fossil fuel economy? Doesn’t the theory of the tragedy the commons seem like a logical reflection of human nature?

However, human interactions with each other and with the environment are much more complex than simple logic would suggest.

Ostrom studied examples of successful communal resource use in environments of weak formal regulation. Under the right conditions, she found that face-to-face human interactions can build trust between resource users.

And from that trust, regulatory practices can be forged that ensure the sustainability of a common-pool resource.

What are the right conditions to agree on climate change action?

Ostrom’s examples of the right conditions needed to avert a system of depletion are key for the unique characteristics of climate change.

Because many factors are present that undermine trust and the formation of resource use mitigation strategies. For example, centralised regulation that overrules the context of each user’s resource use practices. Or lack of natural resource boundaries. And a lack of a common culture or language among resource users.

Such elements have historically had a role in undermining collective agreements on climate change. It was possible that at COP21 we would see a repeat of the failure of COP15. At COP15, due largely to the above influences and the organisational failures of the conference, parties failed to build trust. As a result, they did not reach compromises or ratify a final agreement.

How the the Paris Agreement was made

This year’s COP however, was perfectly orchestrated, allowing for the historic Paris Agreement to be forged. This agreement marks a turning point in the regulation of the common resource of the global atmosphere, overcoming previous obstacles that led to disagreement. But how did this come about?

Before the conference, Intended Nationally Determined Contributions were introduced. As a result, countries could bring the specific contexts of their resource use to COP21, without interference from a centralised authority. Additionally, this meant that each party was aware that others were making sacrifices. All this created a level of trust.

Over the following weeks these pledges were built on through the face-to-face interactions that Ostrom deemed so necessary. So parties built further trust and compromised. Transparent and honest facilitation by the French conference presidency meant little imposition of regulation and a continuing supply of information and motivation.

What happens after the Paris Agreement?

Overall, the open, honest, face-to-face communication throughout COP21 was a perfect example of how, under the right conditions, people can work together to make compromises. Compromises that reduce the plundering of shared resources.

Although the implementation of the agreement is another question entirely, and will need a continuation of trust and compromise, the feat of diplomacy that was COP21, for now, is something to be proud of.

More of the Grantham Centre at COP

Rob was present when the Paris Agreement was made, as were many other Grantham Centre people. And we’ve sent our people to every COP since. If you want more news and opinions then you can read the Grantham Centre at COP.

Edited by Claire Moran. The main image shows the Grantham Centre team, including Rob, at COP21.