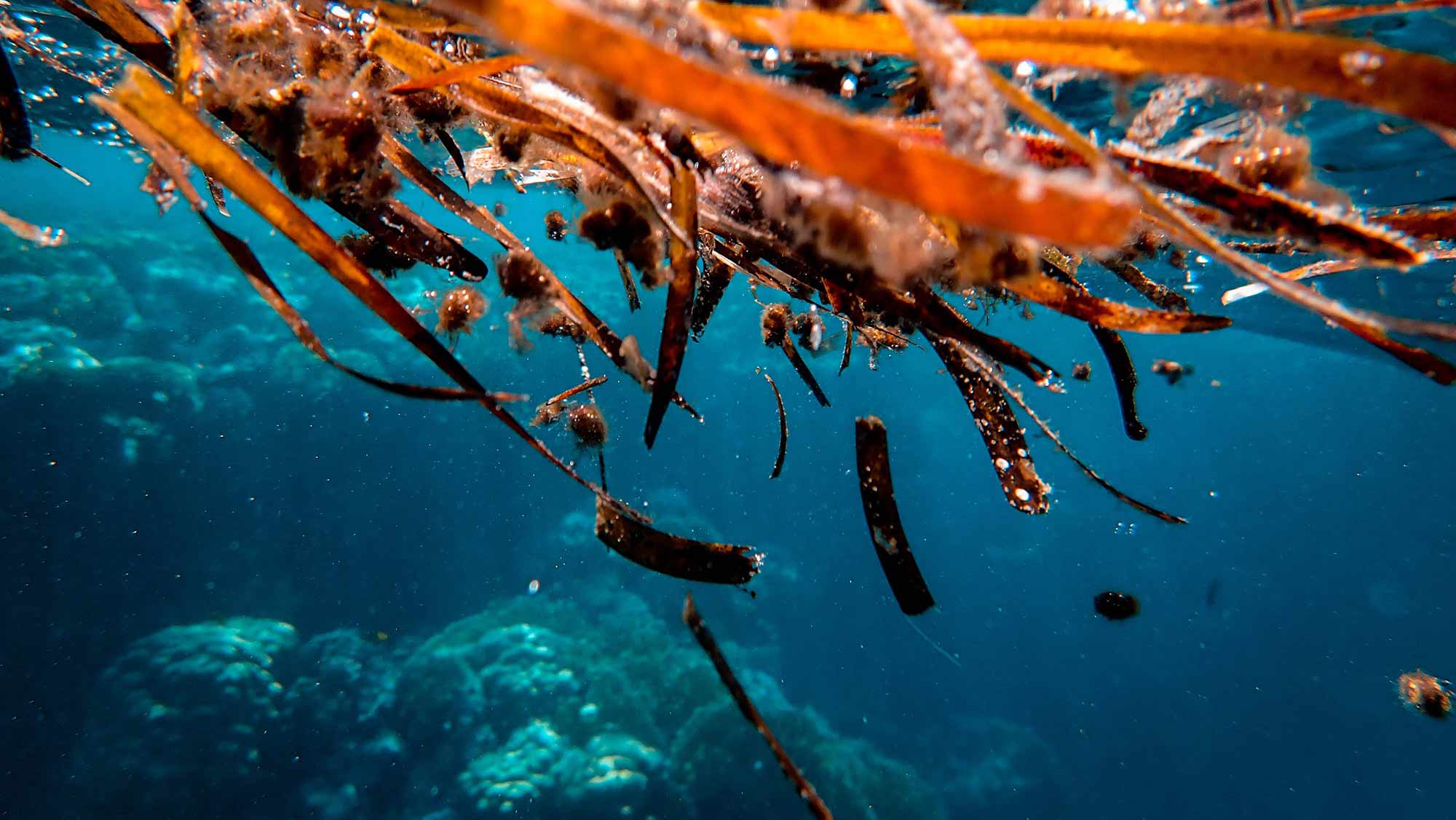 Manasi Mulay sets out how ocean-based solutions could lead to a sustainable future. She considers ocean-based food, energy and transport, and how each of them relate to the UN’s Sustainable Development Goals.

In 2022 Manasi and a group of Grantham Scholars went to COP26. Whilst at COP, Manasi spent much of her time in the Blue Zone and attended cutting-edge sessions on water and sustainability. This blog is inspired by COP and Manasi’s own research into advanced water treatment techniques for pollution.

As well as being a Grantham Scholar, Manasi is part of the Department of Chemistry at the University of Sheffield.

Ocean based solutions and the Sustainable Development Goals (SDGs)

Among the UNs’ 17 SDGs, SDG 14 looks to ‘Conserve and sustainably use the oceans, seas and marine resources for sustainable development’. Basically it aims for conservation of life below water.

But many other SDGs relate to the oceans too. In order to create a sustainable future, it is critical to tap the vast potential of marine assets and use marine resources.

As global temperatures rise, so do ocean levels. This rise in ocean levels is a threat to coastal lives and to the very existence of some small island countries. According to the Ocean Risks and Resilience Action Alliance (ORRAA) 800 million people will be at risk due to ocean level rise by 2050.

Furthermore, ocean acidification due to climate change is destroying ocean biodiversity. For example, 50% of corals in the Great Barrier Reef have been destroyed as a result of climate change.

Industrial pollution is a problem too. Unfortunately, tourism too exploits nature to some extent and also gives rise to the ocean and coastal land pollution. On the other hand, tourism is entangled with the economies and human livelihoods in many parts of the world.

Plastic pollution from human activities has now reached an extent where it has created dead zones deep in oceans where the survival of ocean plants and animals is no longer possible.

However, oceans are not just part of the problem, they can be a source of the solution! Moreover, nature-based solutions through oceans can tackle land problems too.

Let’s discuss these blue solutions for a greener future – by achieving one Sustainable Development Goal at a time!

97% of Earth’s water is in the oceans. Currently, there is water stress on our freshwater water resources. Desalination treatment can convert ocean water to usable water – and it needs more attention.

Desalination is a process that separates minerals from ocean water. Conventional desalination methods have energy intensive processes, high environmental impact and at large scale also pose a threat to marine life. So more research and development is needed to find ways to make desalination treatment a sustainable process.

Research is being conducted by designing innovative containers that can desalinate sea-water at individual scale as well as the desalinating plants for larger scale. Employment of solar based desalination processes can reduce its environmental impact. Sustainably desalinated ocean water can be a source of water for domestic, agriculture and also for industrial use. This may reduce the water stress on freshwater ecosystems.

In this way ocean based solutions can help achieve availability of water for all – the target of SDG 6.

Currently, 600 million people –  about 10% of the world’s population – lives in the coastal areas. And around 2.4 billion – about 40% of world population – people live within 100 km from the coast. Oceans are a great source of food, though climate change has also affected the food generating capacities of oceans.

Food constitutes one third of manmade greenhouse gas emissions worldwide. But ocean based food has lower carbon footprints. This ‘blue food’ needs more attention to decarbonise the impact from food consumption. Doing this would help to share the stress on land-based food production, and also generate more innovative and alternative healthy food options.

Expansion of seafood production without considering the climate change factor would be unsustainable. So climate change adaptive aquaculture practices are more promising in the long run, however they might not fulfil the per capita demands on fishing. In fact a combination of these approaches is necessary. Seaweed harvesting, for example, could be one of the initiatives for sustainable seafood.

Seaweed holds more promise than just as a food source. It can also be helpful for decarbonising the environment.

Seaweed farms can help reverse climate change as seaweed can absorb greenhouse gases. However, it is also necessary to consider if the expansion of seaweed farming is economically viable.

Mangroves are another way that ocean based carbon – ‘blue carbon’ – is stored. Mangroves absorb greenhouse gases such as carbon dioxide and convert them into biomass. This means blue biodiversity can act as a natural sink to GHGs – which is great!

But how does it work? There are 2 ways oceans absorbs carbon dioxide, via physical or biological processes. Ocean waves act as a physical sink for carbon dioxide, taking it deep inside. This process is more efficient at lower temperatures of water.

Alternatively, carbon is converted to other organic compounds through biological processes and stored as a biomass. The process is similar to that of fossils.

But ocean acidification caused by rising temperatures is destroying ocean biodiversity, which highlights the importance of keeping the 1.5°C target alive also for the oceans.

Oceans are a source for affordable renewable energy production through waves and ocean thermal energy. These factors could help us reach the aims of SDG 7: Affordable and Clean Energy.

These technologies are at an early stage, so more research and development for further commercialisation is needed.

Rises in sea levels are also causing changes in hydrodynamics of tidal energy. And this may drive the need for more intricate attention to the environmental impact assessment and techno-economic analysis of tidal energy production.

Navigating through oceans: solutions for transport and mobility

Reforms in the shipping sector can play a critical role in achieving the reductions in global GHG emissions. Research on alternatives such as ammonia based shipping is rising. Emphasis on use of clean energy for the shipping sector, ships run on solar or wind energies, would be more sustainable.

While switching from conventional fuel to renewables, innovations in design and development in ship building is also crucial. For example, the desalination of ocean water followed by hydrogen production from the ocean water splitting to run the ships is one of the ways for reducing the fossil fuel dependence and lowering the GHG emissions. In fact organisations like the Sea Cleaners are already doing this.

Conclusions: a promise of a resilient future

Oceans are a source of food and home to many species. They are also a source of fuel, medicine and whatnot! And perhaps the perfect solution to keeping 1.5°C alive could come from nature – from our oceans. Overall, ocean-based solutions promise 21% reduction in overall manmade GHG emissions according to the high level panel for sustainable ocean economy.

Actions are being taken to tap the potential of oceans and to minimise potential threats to humanity worldwide. Ocean-based solutions were discussed at COP26 on a day dedicated to oceans – the Marrakech Partnership for Global Climate Action Ocean Action Day event. At this event the Ocean for Climate Declaration was launched, calling for ‘governments and non-state actors to scale up ocean-based climate solutions and action.’

Countries have come forward as signatories to the Ocean for Climate Declaration. And the UN has declared the 2021-2030 ‘a decade of ocean science for sustainable development’. It will be worth noting the global and local ocean actions by 2030. Soon after the COP26 in Glasgow, the UK launched a tidal energy initiative worth £20 million annual investment in November 2021. And recently  (June 2022) ocean issues were brainstormed at the UN Ocean conference in Lisbon.

This list reflects what I believe are the key areas for ocean-based solutions. Of course there more that could be added.

Overall, an integrated approach to ocean-based solutions that can minimise ocean pollution and fossil fuel dependence, fulfil market demands and is also economically viable, would lead to a resilient greener future.

If you want to read more about this subject, here are 2 suggestions from Manasi. The Organisation for Economic Co-operation & Development iLibrary and The High Level Panel for a Sustainable Ocean Economy (Ocean Panel) website.

If you want to find out more about the Grantham Scholars at COP26 then look here.

The main image is by Francesco Ungaro.