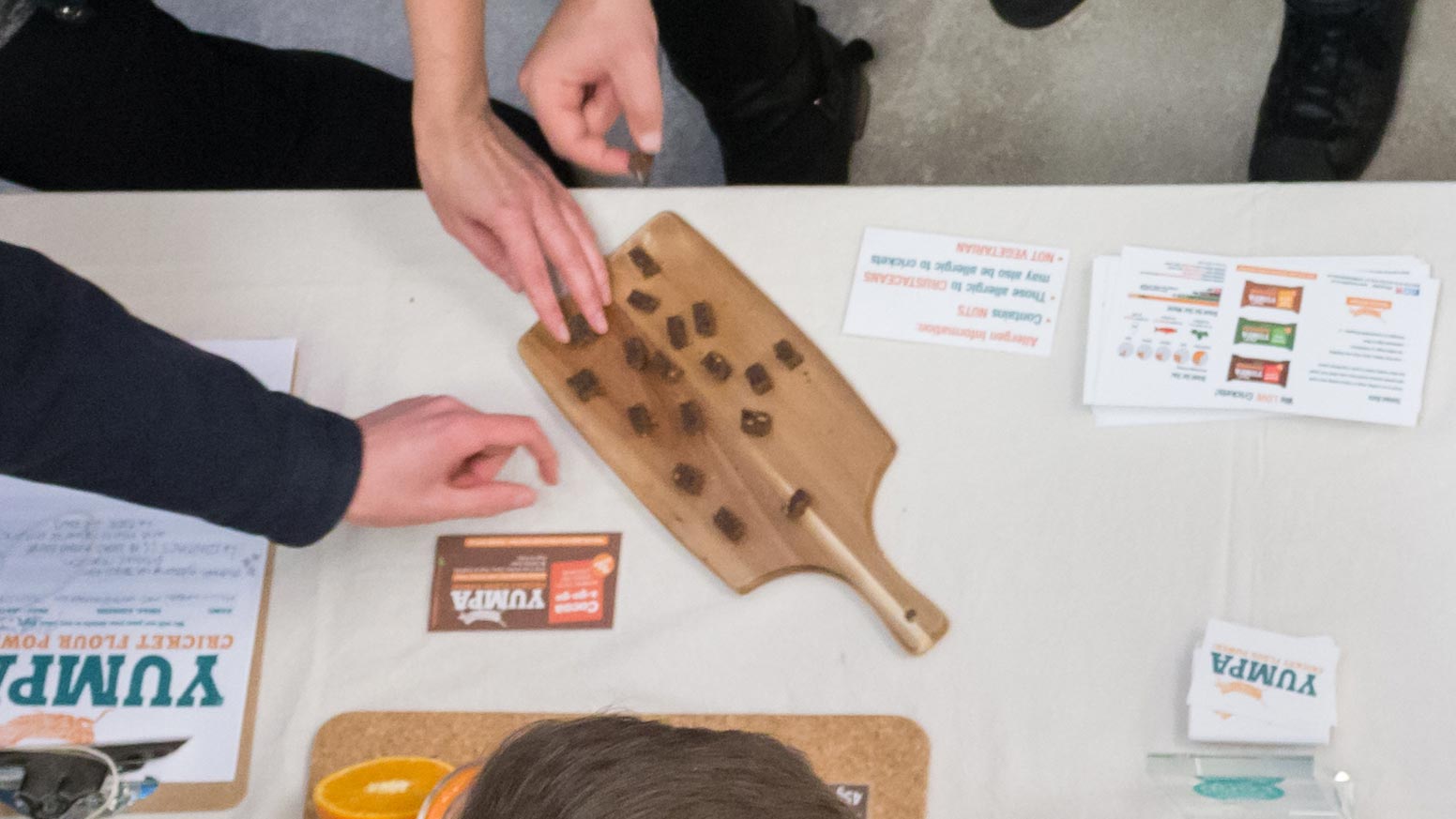 In 2016 Jonas Cromwell went along to the University of Sheffield alumni event at the Royal Society, where he ate insects and learned about feeding 10 billion. Here Jonas fills us in on what he learned.

I was lucky to be able to attend the University of Sheffield’s (TUoS) alumni panel debate at the Royal Society. The event featured some of Sheffield’s best. And it offered an opportunity for TUoS to share its current work with the alumni community.

The task of interesting an audience from a range of backgrounds was helped by the complimentary wine and bug buffet (never tried bugs before? Give it a go!).

How we will feed a world of 10 billion?

The evening’s main focus was the panel discussion, ‘How we will feed a world of 10 billion?’

It has been estimated that by 2060 the global population will reach nearly 10 billion. This population will eat a more resource-intensive western diet. And some experts say we need to produce 50% more food to meet this demand. How will we achieve this?

The panel discussion looked at the challenges to improve sustainability and food security, for example the role of governments, industries and global communities. Key issues of food waste, changing consumption habits and innovations in the agriculture system were at the heart of the discussion.

Panellists were drawn from within and outside TUoS. They were:

Professor Guy Poppy. Guy is Chief Scientific Advisor to the FSA and a Professor of Ecology. He is also on the Grantham Centre’s Engagement Board.

Daniel Vennard, Director at Better Buying Lab within the World Resources institute. He is a former Sustainability Director at Mars.

Dr Megan Blake. Megan is a Senior Lecturer in Human Geography at TUoS. Among other additional roles, she also supervises a few Grantham Scholars.

Professor James Wilsdon: Professor of Research Policy at TUoS, Director of Impact and Engagement in the Faculty of Social Sciences and Director of the Nexus Network.

I ask a question about innovation in food production

The debate started with a question from myself: What is the most important single innovation in food production?

Guy Poppy replied that there is no one single answer and that innovation should be holistic. The whole food production process should be looked at, not just the individual parts. Innovation can be achieved in cross-disciplinary research – something that is key to the Grantham Centre training programme.

For me, the discussion’s most striking moment was on the issue of food waste. A member of the audience asked whether waste hierarchy could be built into supermarket contracts.

Overall, the panel agreed that education and behaviour change have a role to play in reducing food waste. But there is also a need to tackle food losses in developing markets. Also, supermarkets can help reduce food losses in other ways. For example, we could change ‘use by’ and ‘best before’ dates. Guy Poppy argued that that they are not needed for some produce. Lastly, technological approaches, such as GM, have the potential to reduce food waste.

Megan Blake, who is supervising my PhD, made an important point. “The global food system is not working appropriately and we need to change.”

Indeed, we throw away a third of all food produced globally. Yet nearly 800 million people are under-nourished. There is food insecurity in many parts of the world, and food poverty rates are rising. We urgently need to look at the whole of the food production and distribution system.

Eating insects to feed 10B?

Personally, the discussion was of significance to me because of my own research project, ‘Food waste and food recovery within the global food supply chain’. The event helped me consider the wider applications of my research, and allowed me to meet and talk to a number of people from a range of backgrounds, who all shared a common interest and concern for these pressing issues.

Oh, and eating bugs was great. Could edible insects become the next dietary trend – and help us feed 10B?

More on alumni at the Royal Society

Edited by Claire Moran. The main image comes from the Would You Eat Bugs? event held by the Grantham Centre.