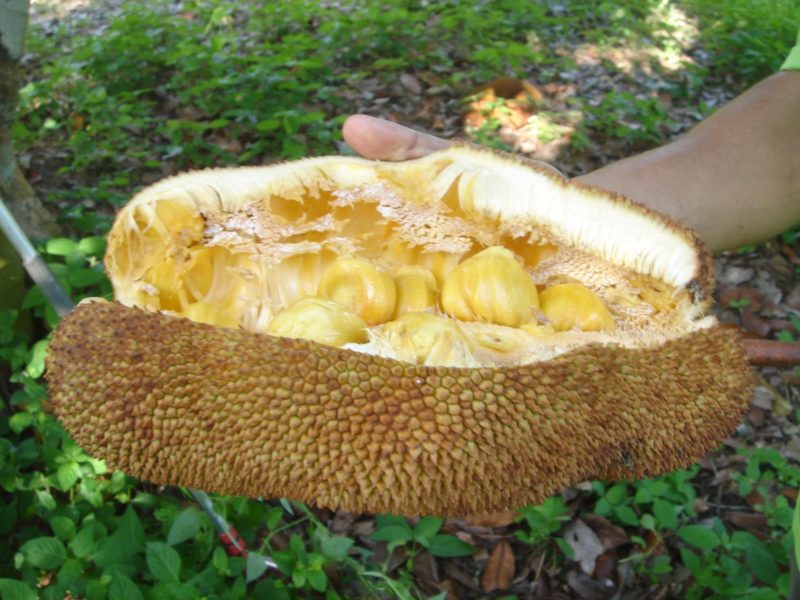 What is cempedak? And what does cempedak taste like?

Cempedak is a species of tree related to breadfruit and jackfruit. But when people refer to cempedak, they tend to mean the strange, spiky looking fruit it produces rather than the tree. This fruit has an intense flavour.

In this blog, our tropical fruit expert and Grantham Scholar Maria Wang Mei Hua reveals what cempedak tastes like, as well as why this plant could be important for sustainability.

So read on to discover what cempedak tastes like, where it grows, and how it is important to the culture of Maria’s home country of Malaysia ↓

Cempedak: a much loved funky fruit

Before joining the Grantham Centre for Sustainable Futures, I studied the genetics of tropical fruits at Northwestern University and the Chicago Botanic Garden in the USA. There I worked with Dr. Nyree Zerega, who studies evolutionary relationships and origins of plants in the Moraceae family, which includes mulberries and figs.

As I’m from Malaysia, I was delighted at the chance to study cempedak (Artocarpus integer), a much-loved fruit and a major local crop in Malaysia.

More about cempedak and its role in history

Cempedak is closely related to jackfruit and breadfruit.

You may have heard of breadfruit because of its pivotal role in the most famous mutiny in history – the Mutiny of The Bounty. The British recognised the potential for breadfruit as food – unfortunately, in this case, to cheaply feed slaves. So Captain Bligh of HMS Bounty was given the duty of transporting breadfruit plants from Tahiti to Jamaica, and it was whilst doing this the famous mutiny of 1789 took place.

But did you know that breadfruit and jackfruit are only two of nearly 70 species in the genus Artocarpus that produce edible fruit?

In fact, more than a dozen Artocarpus species are already being cultivated in South and Southeast Asia. Fruits like these provide a cheap and nutritious food source because the trees can keep producing fruit for many years. Not to mention, they are better for the environment as they sequester carbon and require less water and fertilisers than conventional crops like wheat, corn and rice.

Want to know more about sustainable food? Then you should read our interview with a volunteer at a community kitchen that fed hundreds during lockdown.

Imagine a durian crossed with an overripe jackfruit. You have a pungent stink combined with an intensely sweet aroma, oozing from an oblong fruit covered in rubbery spikes.

As you cut into the cempedak, the milky white latex characteristic of the Moraceae family covers your knife.

Peeling the rind open, crowning jewels of orange or yellow flesh are revealed, bursting with flavour reminiscent of durian and musky mango.

Malaysians and their neighbours in Thailand and Indonesia also love eating cempedak fried, in cakes or even ice cream.

Malaysia and the cempedak family

Before starting this project, I did not know much about cempedak and the cempedak family.

In fact, I had never heard of breadfruit! Now this seems crazy, as it is grown everywhere in Malaysia (it is called buah sukun in Malay). But even my parents didn’t know about it. Now I know it I see it everywhere – in fact I spotted five breadfruit trees during a 20-minute car ride in my home town.

I think this lack of recognition is because breadfruit is rarely sold commercially, but only grown in people’s backyards. Though sometimes local women will sell fried breadfruit at the market (yum!).

Thirdly (and this blew my mind), cempedak has a ‘wild relative’ that grows in the forests of Malaysia.

This wild relative was first scientifically described by a British tropical botanist E. J. H. Corner in the 1930s. It looks just like cempedak but surprisingly lacks the aroma and taste.

The different indigenous tribes of Peninsular Malaysia, collectively known as the Orang Asli, have their own names for wild cempedak. But here I will use the common (probably Malay) name bangkong.

My paper on cempedak and bangkong

The bangkong fruit is harvested only for its seeds while the fleshy part is not eaten. It is an important part of the Orang Asli diet, especially when they go hunting for days in the forest. It also provides emergency food rations for rural villages. Wild crop relatives like bangkong are also really important as a genetic resource for plant breeders.

The lack of aroma and taste in the bangkong fruit led Corner to hypothesise that cempedak was domesticated from bangkong. However, another tropical botanist, Richard B. Primack, thought differently. He had found cempedak growing in the most remote forests of Sarawak, a Malaysian state on Borneo Island. From this he surmised that cempedak and bangkong originated separately from each other.

Questions and answers about cempedak

In our paper, we investigated the question of cempedak origins and looked at the relationship between cempedak and bangkong. We also considered these questions:

Yes- cempedak is much hairier than bangkong (statistically significant)! Besides the hairiness, we found that cempedak and bangkong have distinct genetic make-ups.

However, there is some mixing between them, so they are not different enough to be called different species. I’m happy to let bangkong keep its current taxonomic status as a variety (A. integer var. silvestris – which means ‘cempedak of the forest’).

2) Did cempedak come from bangkong?

In short: we still don’t know.

We used DNA sequences to map out the relationship between several cempedak and bangkong individuals, but there was no clear indication that cempedak was domesticated from bangkong.

However, it seems that some cempedak from Borneo are intermediate between Peninsular Malaysian cempedak and bangkong. Genetic diversity is higher in bangkong than in cempedak.

4) Can we trust cempedak cultivar names?

“Cultivar” means “cultivated variety”. In our study, we recorded 25 different cultivar names, but there are many more!

We found that most cempedak cultivar names are quite unreliable – unless you’re talking about durian cempedak, a funky cempedak cultivar that looks kind of like durian (but they are not actual hybrids – durian is quite distantly related from cempedak).

Jackfruit-cempedak (an actual hybrid) is the most genetically inconsistent. This is likely because different people have tried to cross jackfruit and cempedak multiple times, but they all ended up with delicious results!

I hope my paper will shine a light on the value of cempedak and its wild relative bangkong, as well as other neglected and forgotten fruits of the world.

This work would not have been possible without the help of many people, including the staff of the Forest Research Institute of Malaysia (FRIM) and the Malaysian Agricultural Research and Development Institute (MARDI). Also the Orang Asli guides who graciously led me around the jungle looking for bangkong. Last not least, the orchard owners and other people who let me into their backyards to sample cempedak trees.

All of these people helped me to see many new places and learned many new things – all in my own country.

Isn’t it funny how we can live for so long not knowing the multitude of wonderful fruits and wild relatives that are growing not too far away?

Find out more about sustainable food – join our free newsletter. It comes out about twice a year, and is full of easy to read articles about sustainability, environmental justice and interviews with our people.