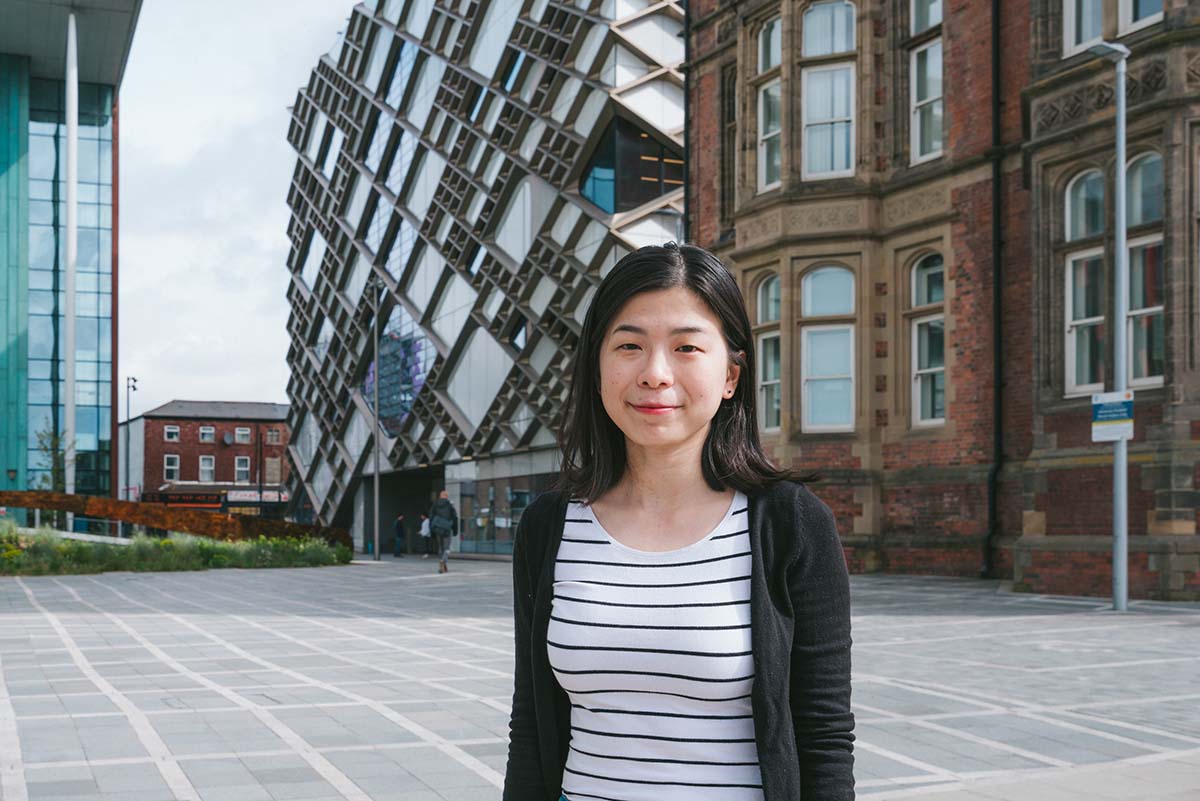 Ling Min Tan is a mechanical engineer who researches how to make cities more sustainable.

In order to do this, she is using the idea of urban metabolism. Urban metabolism examines cities with regard to resources, consumption and waste.

We interviewed Ling Min as she approaches the end of her project. We spoke about urban metabolism, how cities need to change and the importance of optimism.

My parents raised me that way. They told me not to waste, to recycle and to re-use anything that could be reused.

In Malaysia [Ling Min is from Muar, the Royal Town of Johor in West Malaysia] back then recycling wasn’t enforced, so we had to collect everything up and make the trip to the recycling centre.

Does Malaysia have problems caused by climate change?

Not like our neighbours, not like the flooding in Jakarta. But we do have bad air pollution. We are a rich country and produce lots of oil. And we have lots of resources. But this also means cheaper oil for bikes and lack of public transport to get around within cities.

Tell us about your project at the Grantham Centre.

My PhD focuses on how we can make better use of existing resources – without more raw material extraction.

The idea is to create a circular economy: reduce, reuse, repair, recycle, and recirculate resources as much as possible.

What is urban metabolism?

For example, a city may have low emissions but be inefficient in how it uses its resources. In contrast, urban metabolism shows if a city is under-performing because it assesses the city’s ability to utilise the resources available to it.

Urban metabolism looks at a city as if it has a metabolism, like a living biological system, with inputs and outputs. Outputs of a city are GDP, economic benefits, labour or workforce, but also waste and pollution. Input might be energy or resources. It looks at how resources are being imported into the cities as and utilised to produce useful output for economic growth. From these, we can measure the effectiveness of resource utilisation in cities based on the total resource intakes to assess the ability of the urban systems to maximise the use of all the resources available with minimal waste.

Want to know more about urban metabolism? Watch this video from the UN ↓

And how does urban metabolism fit into your research?

I use the idea of urban metabolism to look at how to make best use of all inputs and reduce outputs. My work looks at cities and connected areas, I track resource exchange flows between sectors and how cities utilise flows available in the urban system.

For example, I look at what sectors in a city are using lots of resources and which are the producers and consumers within the urban economy. In any city there are producers and consumers, as well as transformers and distributors. Some sectors only require minimal inputs, maybe just office space. Others require more. It is like the pyramids used to describe ecosystems in nature. There are end users – they are called apex predators in ecosystems – at the top, transformers in the middle, and the producers at the bottom.

Further, I have developed a new indicator of the performance of a city, the overall resource effectiveness, to create a conceptual understanding of sustainable resource use in cities. This in turn helps us to make decisions to regulate resource demand and consumption in cities.

How do cities need to change?

They need to become more efficient. At the moment we don’t see power generation or resource extraction activities (e.g. mining, agriculture and fishing) in a city. Power and resource extraction comes from outside the city. This means that a city mainly acts as a consumer of valuable resources to sustain the system by consuming.

As cities continue to grow, both spatially and economically, urbanisation inevitably increases the demand for more resource extraction and consumption.

As a result, knowing how to effectively utilise what we already have is crucial for sustainable living in cities.

In the ideal city sectors are connected to each other to provide what they need. So less is imported and less is wasted. Everything that can be reused is reused until it is fully utilised. For example, waste from construction is reprocessed and used to make something else.

I used to look at cities as isolated systems. But now I think in networks, flows, connections. We are all parts of everyone else’s metabolisms, and the same is true for cities, like a system of cities connected in a flow network.

Do you think it’s right to think about nature in monetary terms?

I know everyone has different perceptions of nature, but in my model I have to use money to value it. My data comes from monetary units, that’s just how it works.

If we don’t have data of what is happening we can’t learn and act. In order to have places that generate ideas, we need money to flow. To study and advance. Sad to say, but money rules.

Are you optimistic about the future?

I am an optimistic character and I don’t think it is the end of the world. Also, I want to play a role in the solutions, I feel a responsibility to do something. There is still a future ahead of us, and for many younger generations to come. We can still work on it.

I am part of the community working on this. It’s a big community, a group of people doing the same thing. I am sure that together we can make a difference. And knowing that so many people are working on these problems is reassuring.

What is one thing you’ve found out from your research that everyone should know?

That we can consume less than we do. This is as true for individuals as it is for cities. Everyone needs to make better informed decisions about this, and to take the environmental impact into account.

You’re nearly at the end of your studies – what will you do next?

I will carry on working on sustainable cities resource use for my post-doc. I want to find out how to optimise urban systems. Of course you have to get the funding and the right team of people!

I want to improve what we already have and solve the problems I am passionate about. And if I get the chance I will always work in sustainability.

Want to know more? Ling Min has published an Open Access paper, and you can read it here.