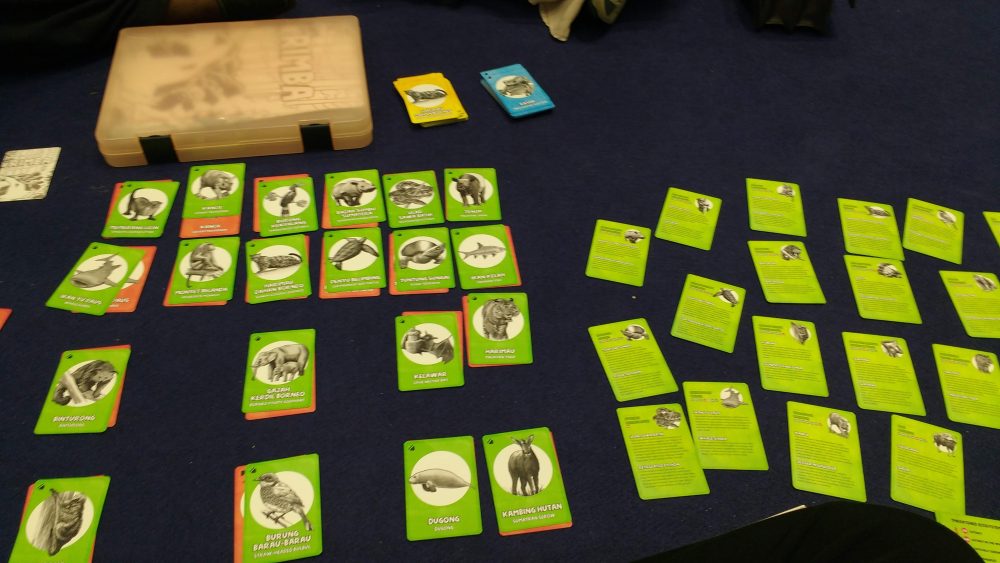 Can you name a wild animal from Malaysia? Not many can. This is just one of the facts Grantham Scholar Maria Wang Mei Hua learned at a conference in Kuala Lumpur. Plus she discovered the people who want to make Malaysian animals famous through a card game.

So read on to find out about those wild animals from Malaysia, indigenous viewpoints on conservation, and how Malaysian clothes can be a great alternative to a Western suit.

My first conference in my home country of Malaysia

Back in July, I attended the 29th International Congress for Conservation Biology (ICCB) held in Kuala Lumpur, Malaysia. The theme of the conference was ‘Conservation Beyond Boundaries: Connecting biodiversity with communities, government, and stakeholders’.

I’ve attended a few conferences before, but this was my first time attending one in Asia. Most importantly – it was in my home country of Malaysia!

Because I’ve been studying abroad for a long time, I was very excited about the chance to both hear from and meet Malaysian conservationists.

And the conference did not disappoint. I met up with old friends, took a selfie with my childhood hero, and learned that the wild animals of Malaysia have identity issues.

This is my photo diary of the conference, look out for those wild animals…

Welcome to the conference!

At the welcome reception on the first night, I reunited with friends from the USA, Singapore – and even Sheffield. It was lovely to catch up with them, some of whom I haven’t seen in years.

The next four days were jam-packed with activity. This is not surprising as it was a huge conference – with more than 1,300 delegates from 87 countries!

On some days there were as many as 12 talk sessions going on at the same time. Here are some of the highlights.

Day 1: Starting off with a bang!

Really happy that people found it interesting and relevant!

There were many sessions focused on environmental education and effective engagement.

From one of the talks I got a cool handout that teaches children about edible insects!

Day 2 was full with fascinating people giving talks and activities. I went to a number of talks, including one from a fellow Grantham Scholar. But first was a moving show of unity from representatives of different faiths.

What happens when you put an indigenous chief priestess’ daughter, an Indonesian ulama, a Buddhist monk & avid gardener, and a Vatican priest in a room at ICCB?

The answer is a Faith and Conservation in Dialogue panel.

Despite their different backgrounds and paths, the panelists all believe that protecting our planet and its creatures is a deeply spiritual and moral issue and that we must unite to stop destroying our common home.

The Interfaith Rainforest Initiative is a movement that is working to “bring moral urgency and faith-based leadership to global efforts to end tropical deforestation”.

Bowy is studying the impact of protected areas on poverty in Nepal and Brazil.

You can find out more about Bowy here.

The indigenous perspective on conservation

Almagul Osmanova, the sole female panellist, radiated hope and joy as she spoke about her work with the Land of the Snow Leopard Network in Kyrgyzstan and the stories she helped to gather.

I was also amazed – and moved – to see not just one, but three Orang Asli (indigenous peoples of Peninsular Malaysia) in the limelight on this big stage at this huge conference. Representation of the Orang Asli is pretty much unheard of. Furthermore, Orang Asli rarely feature positively (and are almost never shown in positions of influence, such as conferences) in the media.

During the Q&A, questions were asked about how indigenous people could be more involved in conservation. No one asked the panellists about their hopes and aspirations outside of the conservation agenda. I found this frustrating.

So I posed this question: “What do you want, as indigenous peoples, for your community?”

The reply I got was disarmingly simple and straightforward. “For my community, I want a steady income that doesn’t destroy forest life. An education that allows us to be proud of who we are.”

Look here for a link to a great Orang Asli organisation.

On day 3, the first event I attended was a symposium on Environmental Education and Community Engagement in Malaysia.

It was eye-opening and inspiring to hear about the stories of passionate and enterprising Malaysians who are engaging and teaching local communities about the importance of wildlife and nature, and saving endangered pangolins on the way. One example was Thary Goh.

“When you ask a Malaysian kid to name a wild animal from Malaysia, their first answer will be ‘Giraffe’ or ‘Zebra’,” Said Goh. “But these are not Malaysian animals – they are the animals [the children see] on the National Geographic [TV channel]!”

Inspired by the realisation that Malaysian children don’t know about the wild animals of their country, Thary Goh started the Urban Biodiversity Institute (UBI). The UBI aims to bring city kids in touch with local nature.

The conference was also a great place to learn what other researchers are studying in my field of interest, which is sustainable agriculture.

For example, Joss Lyons-White from Imperial College London looked at the perspectives of various stakeholders in Gabon on the concept of Zero Deforestation (ZD).

ZD is really important for effective implementation of sustainable agriculture initiatives, and I had never really thought that there could be downfalls or injustice associated with it. So being challenged by perspective of people on the ground was an important learning moment for me.

Are you a cool cucumber or a red hot pepper?

During lunch breaks there were workshops on all sorts of topics.

One example was workshop which assessed what type of leader you are. Out of curiosity, I attended this workshop – which was called “Conservation Leadership”. It was organised by two facilitators from BirdLife International.

It turned out to be really fun! In order to figure out what our leadership style was, we positioned ourselves along two axes (wind/water and cool cucumber/red hot pepper). And these choices ‘sorted’ us into 4 different leadership styles.

It was spooky how accurately the type matched me!

Then we broke out into our sorted groups to discuss our strengths, weaknesses and strategies to deal with other types of leaders. I was happy to learn that quieter, non-traditional leadership styles (like mine) are equally important in ensuring effective teamwork.

So…Can you name a wild animal from Malaysia?

But it’s not all work and no play at ICCB! At the end of day 3 I sat down to play the card game ‘RIMBA’. RIMBA was created by an enterprising pair of young Malaysians to help kids (and their parents) learn about local endangered species in a fun way.

It’s the last day of the conference, energy levels are dipping, and people are experiencing ‘conference fatigue’. But I finally found the courage to approach Dr. Wong Siew Te, the founder of the Bornean Sun Bear Conservation Center.

Dr Wong Siew Te is an inspirational figure to me because he was the first Malaysian wildlife conservationist I read about in the newspapers when I was growing up. He was so friendly and open. I took the opportunity to ask him for a selfie!

One People, One Reef

The final event of the conference was the closing plenary talk, jointly given by John Rulmal Jr. and Nicole Crane. The former is a community leader for the Yap islands in Micronesia and the latter coral reef scientist. They are the co-leaders of the One People One Reef initiative.

This initiative is a successful collaboration between conservationists and community members to manage coral reefs across the Yap Islands.

The plenary stressed the importance of listening to – and collaborating with – local communities to effectively meet conservation goals. Throughout the conference, this message was repeated. I will do my best to apply this attention to local people in my own PhD research and conservation work.

All in all, the conference was an enriching and inspiring experience.

I am grateful to the Grantham Centre for providing funds for me to present at this international conference, not least because the high conference fees meant that many Malaysians could not afford to attend.

I made new friends, learned about their passion and inspiring conservation stories, got contacts for my upcoming fieldwork. Perhaps most importantly, I renewed my hope in the battle to save biodiversity!