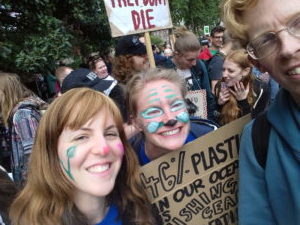 We funded Grantham Scholar Mira Lieberman to go to the annual London Animal Rights March, here she explains why activism is our moral duty and fundamental to democracy.

Recently, we interviewed Mira to find out more about the ideas she outlines here. If you want to find out more, then read Hedgehogs, ecosophy & extinction accounting – Mira Lieberman interview.

Why activism is our moral duty by Mira Lieberman

At a conference recently, I got to talking with a successful linguist, one whose research on gender and identity I have read and follow. I was surprised to find out we share a similar lifestyle: we’re both ethical vegans. I was telling her about my Esther project I wrote about animal rights activism when she disclosed that although she identifies more strongly with veganism and animal rights than feminism and gender equality, she rarely lets colleagues know she’s vegan, let alone write about it.

It dawned on me this year, ever since I began my PhD journey, that some social movements are more equal than others in the eyes of academia. An academic who openly identifies as feminist or anti-racist is, nowadays at least, met with little or no resistance, while those fighting for the liberation of fellow earthlings from violence and exploitation face de-legitimation.

Academia is not enough

Academic research, while contributing valuable knowledge, needs to be disseminated through powerful channels of change in order to inform and facilitate decision-making. Indeed, many academics and literary figures recognise the importance of taking an activist stance. For example, renowned linguist Noam Chomsky was arrested during the 1976 anti-Vietnam war March on the Pentagon together with prominent writer Norman Mailer whose novel Armies of the Night depicts the march in immortalizing prose.

I outline a case here for the importance of activism, especially animal rights activism, in and beyond academia. As a response to environmental crises that include the plight of human and nonhuman animals, activism allows scholars and researchers to act responsibly, engage in discussion and defend those who are otherwise unable to do so themselves.

On 25th August at 12pm a delegation of inter-community scholars and activists from the Sheffield Animal Action together with Grantham scholars will join the annual London Animal Rights March on behalf of the Grantham Centre for Sustainable Futures. Although veganism will feature prominently on our banner, we understand ourselves as flying the flag for radical intersectionality.

As Philip Armstrong, Associate Professor of English at the University of Canterbury writes: “veganism raises the most radical and urgent of all questions – questions about production and consumption of the basic necessities of life; sustainability and environmental survival; the ethics of the body; suffering and pleasure, life and death”. To this we could add veganism as embodying the fight to end exploitation and oppression on all levels: racism, sexism and speciesism.

US anthropologist and outspoken activist who paved the way for women sexual liberation in the 1960s and 1970s, Margaret Mead said the following, “[n]ever doubt that a small group of committed people can change the world. Indeed, it is the only thing that ever has”. And we are only to look to history for inspiring examples.

On March 3, 1913, one day before the inauguration of president Woodrow Wilson, more than 5,000 women marched on Washington to fight for the right to vote. Armed with placards, yet advocating peace and equal rights, suffragette activists were mocked by about half a million spectators. This 10th of June marks hundred years since the suffragettes won the right to vote.

Not all law is just

This is an apt reminder that not all law is just, but a change in policy alone does not achieve a radical shift in societal and political values. Henry David Thoreau, aided and guided by his famous colleague Ralph Waldo Emerson, was arrested for refusing to pay his poll tax to a government that supported slavery. Thoreau, in his influential essay Civil Disobedience emphasizes that the true power lies with conscientious individuals who do not take the law at face value: ”Unjust laws exist: shall we be content to obey them, or shall we endeavour to amend them?”.

For anarcho-feminists such as Emma Goldman (although she does not identify as feminist), amending laws and policy is not sufficient, as the right to vote does not present a true and full emancipation. Albeit a step in the right direction towards women emancipation, Goldman viewed the right to vote as a synthetic political apparatus that would not radically transform patriarchal hegemony.

Therefore, in their efforts to challenge the status quo through civil disobedience as enacted by Thoreau or education as heralded by Goldman in her advocacy for contraception, both of these influential figures emphasise that possessing awareness of a wrong or evil is not sufficiently liberatory. Awareness needs to turn into action.

Why is activism our moral duty?

The polemic debates in and outside the Social Sciences during the 1960s shook the foundations and assumptions underpinning conceptions of the human condition.

American philosopher Richard Bernstein signals that shallow protest is not enough, but what is needed is a radical approach that would involve not only a restructuring of social theory but connecting theory to practice and beyond.

Here I will outline what I believe to be the key facets of this type of radical activism.

In the context of environmental problems, activism, although seen as somewhat inimical by academe, is ethically and morally mandatory.

Activism for the protection of all living beings, clean air, healthy soil, is taking a stand in our professional writing or speaking rather than attempting to maintain a stance of neutrality. In the eloquent words of Howard Zinn, you cannot be neutral on a moving train – or a sinking Titanic.

Andrew Goatly, an influential ecolinguist, correctly identifies the urgency in addressing and taking action to mitigate human assault on the natural environment, “our most urgent priority must be to address the ideology of the exploitation of nature which has developed over the last two hundred years […] In the context of the ecological crisis a single-minded preoccupation with sexis[m] and capitalist-imperialis[m] […] is rather like addressing the problem of who is going to fetch the deck-chairs on the Titanic, and who has the right to sit in them”.

As Thoreau claims, “[t]here are thousands who are in opinion opposed to slavery and to the war, who yet in effect do nothing to put an end to them […] they hesitate, they regret, and sometimes they petition; but they do nothing in earnest and with effect”. As researchers, we are often the only people with requisite information to influence decisions. We have the ability, nay- duty, to effectuate change. Not only that, but we also have a responsibility for activism and advocacy through what Kristin Shrader-Frechette calls complicity. Because we, in the Western ‘developed’ world continuously benefit from environmental harm through our lifestyle and disproportionately luxurious standard of living.

Activism affords and encourages counterarguments and dialogue in public discussions, presenting a democratic way to resolve conflict. In this way, activism is an important tool with which to advance public education and decision-making.

By drawing out public debate, activism promotes counter-discourses that could challenge status-quo dominant destructive discourses and provide new, more emancipatory discourses. When considering other aspects of activism and resistance, it is a group solidarity that can contribute to a successful contestation. Contestation is painful and hard when undertaken alone and can be empowered through group solidarity.

Without such activism, we risk silence that would act as reifying the status quo.

Silence and inaction condone killing our fellow species to extinction, brutalising and condemning their homes, poisoning waterways and making the air unbreathable. Understood in this way, activism can be viewed as a form of self-defence in a world where environmental hazards are threatening the health and existence of all life on earth.

We, as scholars and academics, have the obligation to engage in activism in order to halt and possibly reverse climate change and other evils to protect human and nonhuman rights to bodily security and equal protection.

As Abraham Lincoln reminds us, “To sin by silence when they should protest, makes cowards of men”. And women. We cannot sit idly by while billions of animals are tortured and killed for human enjoyment, destroying the planet and contributing to extinction. Join us at the Animal Rights March and let your voice be heard.

Want to hear more from Mira? Then read our interview with her: Hedgehogs, ecosophy & extinction accounting – Mira Lieberman interview.