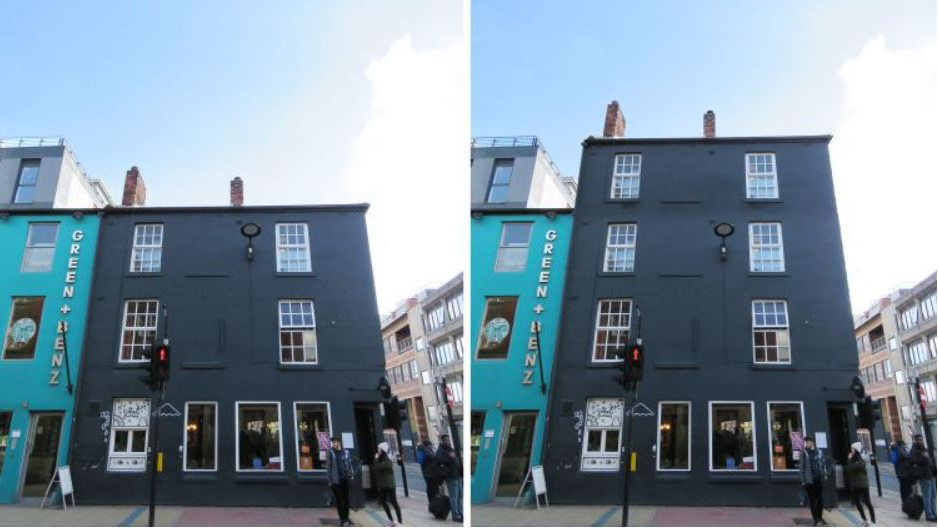 If rolled out across the UK, extensions could bring down house prices, reduce carbon emissions and meet government housing targets.

Charles is supervised by Dr Danielle Densley Tingley at the University of Sheffield’s Department of Civil and Structural Engineering. You can find the University of Sheffield press release about the study online. Two storey extensions could help to tackle UK’s housing crisis (the main image in this page is from this press release and shows an example of an extended building).

The study was covered in the media and by various trade websites, and we’ve collected them below.

Charles was interviewed by Howard Pressman for BBC Sheffield. You find Charles’ bit about 16:22. They spoke about the potential for housing provision through vertical extension in Sheffield.

Could building up could solve Sheffield’s housing crisis? These great gifs from University of Sheffield PhD candidate Charles Gillott caught our eye this week. Gillott is writing his thesis about how the vertical extension of existing buildings could help tackle the housing crisis.

More from Charles on vertical extension

Charles gave a great overview of his work in the Conversation. We have reusable cups, bags and bottles: so why are our buildings still single use?

COP26 observer interview: Charles Gillott. Before he went to COP Charles explained why why we need to both train engineers to reuse buildings and create policy to enforce a circular economy for the construction industry.

A solution that tackles the UK’s housing crisis, offers a lifeline to struggling high streets and helps the government meet its net zero target?⁰

The study led by @CharlesGillott has revealed that building vertical extensions can tackle all three priority areas.