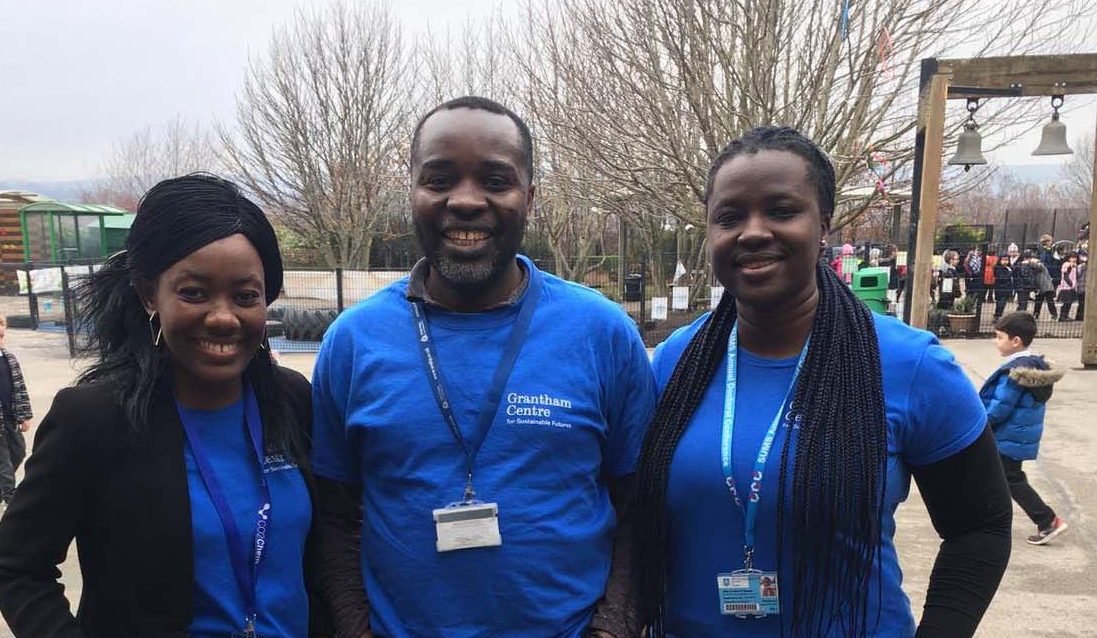 Food waste is a big problem for the environment and public places, like schools, create a significant proportion of it. So Grantham Scholars Jonas Cromwell, Gloria Mensah, Ye Jiang, and Eunice Oppon went to Anne Grove Primary School to try and help them reduce their waste. In this blog, they explain how they worked with the kids and staff on this important environmental issue.

Food waste in the UK

Perhaps most shockingly, 5 million tonnes of this waste could have been eaten (all figures are from WRAP).

While 70% of this waste is domestic, it’s often overlooked that a substantial amount comes from public places like hospitals and schools.

So we decided to take our ‘reduce food waste’ message to a local primary school. After all, educating children is the best way to create new habits.

And food waste in schools is a big problem.

For example, a recent report by WRAP Food waste in Schools found that in England the majority of food waste in both secondary (77%) and primary (78%) schools is avoidable. Further, school canteens and kitchens are significant areas for food waste generation.

Examples of the types of waste are food that is cooked but not served or food that is served but not eaten. Specifically looking at primary schools, 72% of the waste is produced in the kitchen and canteen, with an equal split between the two.

Because the 4 of us find food waste alarming, we were motivated to drive positive change in our area of influence. So we embarked on an exciting public engagement activity with a local primary school.

This activity – School Food Waste Challenge 2019 – took the form of work with a school community. Our aim was to raise awareness about food waste and its environmental, economic and social impacts.

We created a 4-week program which included organising food waste audits, awareness-raising sessions and hands-on workshops with presentations and games.

It was great fun working in the school because the children, the teachers and the canteen staff, were fantastic.

Our first job was an audit to take baseline measurements of food waste generated during lunchtime over a period of 5 days. This would let us know if our programme had a positive impact at the end.

So we engaged pupils from upper primary (7-11 year olds) and taught them to separate their leftovers into designated waste bins. Bins were categorised into 3 types – fruits, pudding and all other food. For the lower primary pupils (4-7 year olds), we asked the catering team and some teachers to take the baseline measurements.

Every day the total was measured, using scales. Our results show differences in the level of waste generated, with the younger group creating more waste.

Taking these measurements highlighted the total amount of food waste produced each week. It also revealed which category of foods was wasted the most, for example fruits that came with sandwiches were not popular.

In order to gain more insights into why food was wasted, we also spoke to the pupils about waste and why they didn’t finish their food.

Interacting with the pupils was a delight because they were so enthusiastic. They asked lots of questions like, ‘why are we separating the waste?’. Others were eager to show that they correctly segregated their left-overs.

For weeks 2 and 3 we put on workshop presentations, played informative games and led interactive group activities. All of these activities were designed to raise awareness about the need to take action about food waste.

One of the games we played, for example, was a food-miles mapping game. In this game flashcards map out the journeys of different kinds of foods, like tomatoes, sausages and bread.

The idea was to get children to think about the miles food travels from the farm before it gets on their plate. Hence, it was a chance for them to reflect on how they could help reduce food waste.

We also spoke to the children during their school assembly. Topics we chose included, ‘where our food comes from’; ‘why we waste food’; and ‘how we can reduce food waste’. Pupils showed excitement on these topics, with a great show of hands when we asked them questions. This enthusiasm was encouraging, as it showed that they were interested.

Our team also introduced pupils to the 3Rs – Reduce, Reuse and Recycle. Further, we taught them how to apply the 3Rs to help reduce food waste at home and school. At the end of the 3Rs session, our pupils resolved to use them in the future.

Week 3: Pupils get skilled up

In the 2nd and 3rd weeks we trained 10 upper primary pupils to conduct interview surveys of their peers. They interviewed 5% of pupils from each class in the school.

Interviews enabled us to understand pupils’ experience of school food waste and why food waste happens.

Classes also made posters to raise awareness about the issues of food waste. And these posters were then displayed at key vantage points, like the notice board, entrance doors and in the corridors.

The last week: What we achieved

In the last week we did another food waste audit in order to take final measurements. We found that pupils were more conscious of what was being thrown away. And this resulted in a reduction in the total amount being thrown away. Further, there was an increase in awareness and knowledge about the issues associated with food waste. This awareness was demonstrated in workshops and assemblies.

The volunteer pupils also learned vital skills, such as taking measurements as part of data collection, addition & subtraction, recording & reporting, interpreting findings & making predictions, and suggesting improvements. These skills have given them the tools they need to act on food waste.

We also showed the volunteers ways to work with other groups to reduce food waste. For example, we organised a dialogue session between the core volunteer pupils (pupil council) and the head cook.

Pupils presented the results from the surveys. There followed discussions about the data. This provided common ground for the pupils and canteen team to understand the challenges faced in the kitchen. Because of this dialogue, the head cook is planning a tasting session where pupils can try new menus. There was a further agreement to innovate ways to reduce food waste further.

Overall, working with the children was a delight. It was humbling to see how eager they were about reducing their impact on the environment.

But it also created a great sense of responsibility for us. Because as sustainability ambassadors we must engage the public – and especially the younger generation.

We hope that through our outreach activity at the school, the understanding and awareness of the children, canteen staff and teachers alike, have increased. Because this will have lasting impact as the school takes steps to reduce its food waste further.

For us, this experience has broadened our understanding of learning and teaching in primary schools. It has also shown us how to develop better teaching materials and activities to bring our research to life.

And perhaps best of all, we have contributed to the University’s commitment to widening participation. We really hope we have inspired young people to develop an interest in higher education.

Want to stay in the know about food waste and other Grantham Centre research? Sign up to our newsletter