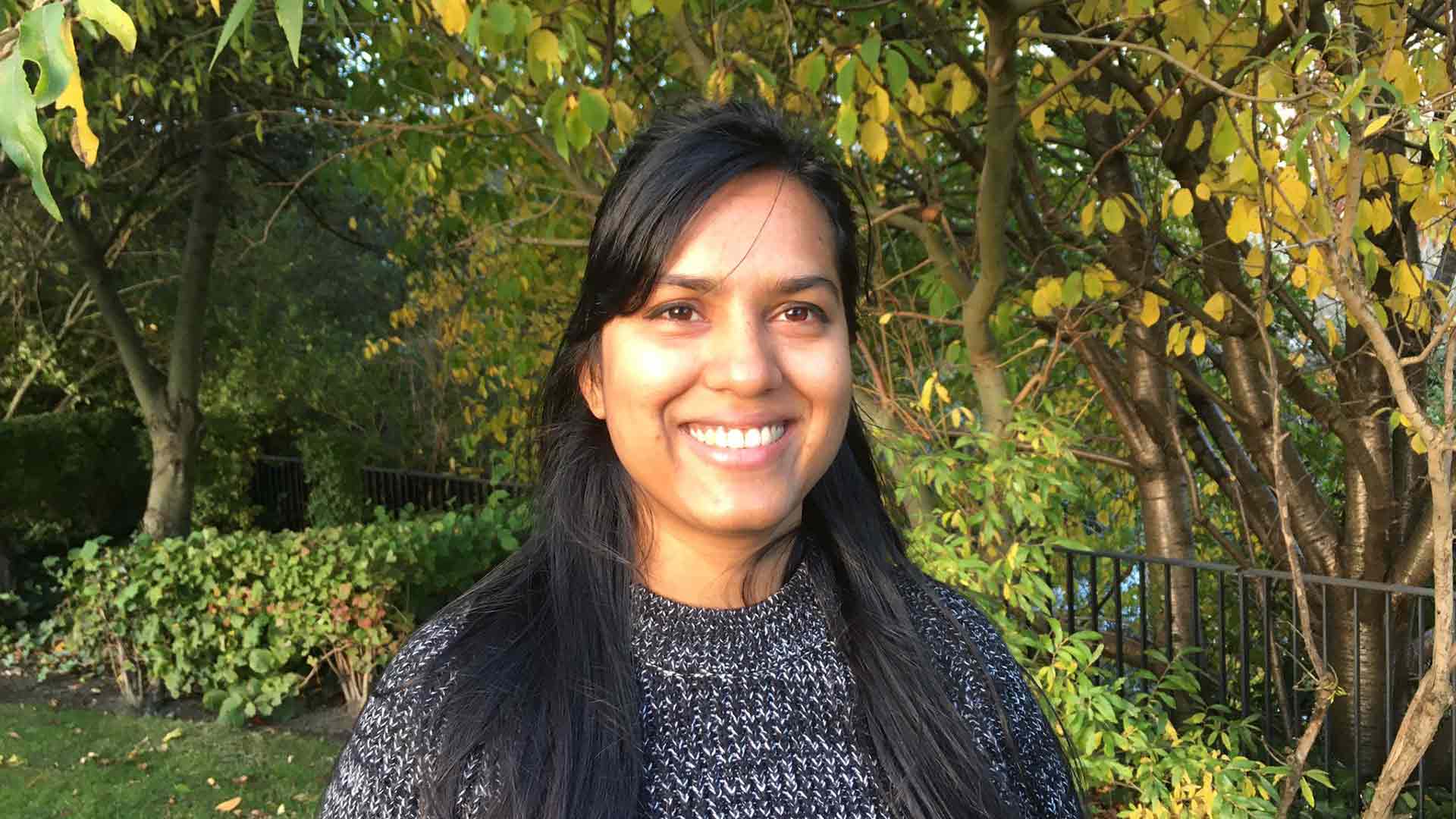 Official COP26 observer Mary Eliza explains her hopes and fears for COP26. Plus we talk about her research into legumes and the future of sustainable food.

Grantham Scholar Mary Eliza is from the School of Biosciences at the University of Sheffield where she researches the potential of viruses to reduce the need for nitrogen fertilisers for legumes.

Follow COP26 observer Mary on Twitter where she’ll be posting from COP26. If you want more from our COP26 observers, then read our interviews with them.

Why do you want to go to COP26 as an observer?

To see how knowledge makes its way to policy and how policy works at the highest levels. As a sustainability researcher I need to know how the policy landscape works so I can be more effective.

Who do you think is missing from COP26?

From an EDI perspective, it is sad to hear about countries who are already seeing the impact of climate change and are also the ones who cannot come to COP because of Covid.

I also think farmers should be represented at COP. It is important we have good communication between growers and those who create policy. Farmers are the end-users of fertilisers and any mitigation technology or initiative which may be put into place at COP.

What are you most looking forward to about being at COP26?

Being able to feed back information I learn there to my fellow students and to farmer organisations. I think it’s important to keep the flow of information going. Recently, I spoke to a group who are doing the same degree as I did. It was great to tell them about cutting edge research. Younger people and early career researchers are the people who are going to make the changes we need to happen. Seeing the impact people like Greta Thunberg have had on the climate change discussion is really inspiring.

Mary’s research: how viruses can help reduce nitrogen use

Mary has a degree in Botany and a masters in Environmental Science. For her masters, she spoke to small-scale land farmers in India (where she was born). She found that some farmers use nitrogen fertilisers on the food they sell but not on the food they eat themselves. Her current research is on making legumes better at fixing nitrogen so that farmers can reduce, or stop using, nitrogen as a fertilizer.

Why work on legumes, which have a lower environmental impact when compared to meat?

Firstly, I love plants. So I am following my passion in studying them.

Secondly, even though the impact from legumes is about a tenth of that from meat, it still adds up. Anything we can do to reduce the global use of fertilisers will have a positive impact.

Thirdly, legume consumption is the future of sustainable diets, not just in terms of nutrition but also, in terms of greenhouse gas emissions (as you can see in the diagram below). As a result, demand for this type of biotechnology will only increase in the future. My work may mean we can supply nitrogen to plants with reduced nitrogen fertiliser use.

Thirdly, in some places soil is too degraded to grow food – the nitrogen fixing bacteria isn’t there. So it will need to be added in some form for growth. Similarly, if we start growing say soybeans in the UK (where they do not grow natively) then that crop would need help from its native nitrogen fixing friend, and once we add them, it could mean less need of fertiliser.

Why should we use less nitrogen?

Nitrogen emissions (such as ammonia, nitrogen oxide and nitrous oxides) contribute to air pollution and acid rain. Both of these cause respiratory problems and cancers for people. Plus they damage forests and buildings.

Also, nitrogen-based gases play an important role in global climate change. Nitrous oxide is over 276 times more effective at trapping heat in the atmosphere than carbon dioxide. And nitrogen can boost the growth of algae and cause water pollution.

Plus, for some farmers nitrogen is their biggest expenditure. So finding ways to reduce the need to add nitrogen can benefit both the environment and farmers, and everyone who relies on farms to feed them.

Why do we use nitrogen at all?

Nitrogen can cause a lot of problems. At the same time, farmers rely on it to boost productivity. This is because its reactive form (Nr) is a nutrient that is essential for all kinds of lifeforms on the planet. For instance, it is needed for photosynthesis and is a building block of proteins and DNA.

However, though nitrogen gas (N₂) makes up 78% of the air, in this form it cannot be used directly by plants. As a result, fertilisers are used, usually made from ammonia, a form of nitrogen that the plants prefer.

Your work is specifically on legumes, bacteria and viruses – can you tell us more about it?

Legumes (like peas, vetches, clovers and beans) take nitrogen from the air in a process known as ‘fixing’. You have probably heard of the symbiotic relationship between trees and fungi. Underground, tree roots and fungi’s root-like system are in close contact. Through this contact each provides the other with ‘food’ it can’t make on its own.

Similarly, legumes have a symbiotic relationship with bacteria in the soil – rhizobacteria or rhizobia.

So rhizobacteria and legumes work together to feed each other?

Rhizobacteria take nitrogen from air in the soil and feed it to legumes in special organs called root nodules. In exchange the plant provides carbohydrates to the bacteria.

And viruses can help legumes get more nitrogen?

Rhizobacteria are naturally present in the soil and form symbiotic associations only with their specific host legume plants. However, they vary widely in their ability to fix nitrogen. Some are very good at fixing nitrogen while others, ‘cheaters’, are not so effective. The cheaters still take carbohydrates from the plant but without giving much (or worse – nothing) in return.

So my work looks at ways to improve efficient rhizobacterial based inoculants using viruses. In other words, I am trying to stop the cheaters and help the good ones.

Inoculants are microbial preparations applied to soil or plants. Other researchers have extracted efficient rhizobia from soil so that they can be used (or inoculated) to provide nitrogen effectively to plants.

Have these techniques produced good results?

They are mostly used where the soils have less effective rhizobacteria or where host plants have been newly introduced (such as soybean in various parts of the world). But there are challenges to them functioning effectively.

And that’s where your work comes in?

My work looks at using beneficial viruses to increase competitiveness of these new populations of rhizobacteria.

There are viruses which integrate into bacteria populations, so when the bacteria divides, these viruses (instead of killing the bacteria) multiply with it. But these viruses also leak out of the bacterial cells, which means once in a while the virus will kill off an individual cell in which it has integrated and spread out to infect newer populations. But in the process, the whole host population is made resistant against the virus.

Is this genetic modification?

No, we’re not using GM here. It is like any other plant selection process but on a much smaller scale because it is bacteria we are looking at.

Given how little we know about the soil biome, is there a risk this sort of work could end up messing up soil health?

Of course there is always a risk when we do things without knowing enough about them. But I think we have learned lessons from past mistakes about this sort of biotechnology. We should not be complacent, but also we have to balance possible risks against the known risks of fertilizers.

Also, it may be that the bacteria needed is present in soil but that it hasn’t had any ‘friends’ to grow with.

If you want more from our observers at COP26, then you find them all here: Grantham Centre at COP26

Or, in order to keep up to date about our sustainability experts, you can sign up to our newsletter.

And to find out more about COP26 observer Mary Eliza look at her profile page.