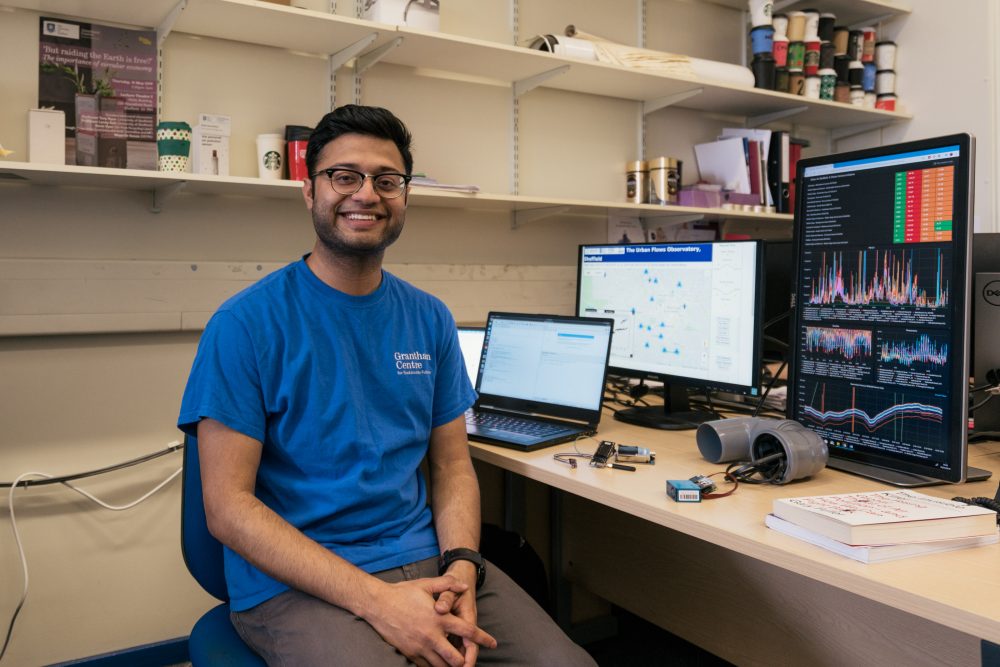 Did you know that air pollution in parts of Sheffield is the equivalent of a smoking habit? Or that domestic wood burners are a responsible for huge amounts of air pollution?

Grantham Scholar Rohit Chakraborty, who works with Urban Flows Observatory on collecting inexpensive air pollution data, shares these frightening facts and more in an interview with us. You can read the interview below, but first a quick explanation of the scale of the problem he is tackling.

Not only does 91% of the world’s population live in places where air quality exceeds WHO (World Health Organisation) safety limits, but also around 7 million people die every year from exposure to polluted air.

As a result of data like this WHO have declared air pollution a global “public health emergency”.

Perhaps you think air pollution isn’t a problem in the UK? In reality, safe limits of harmful particulates and oxides of nitrogen are regularly breached in many UK cities. Shockingly, around 40,000 people in the UK each year die earlier than they should because of air pollution.

Even a ‘green’ city like Sheffield, where the Grantham Centre is based, suffers from illegal levels of pollutants. For example, Sheffield experiences 20% over the safe level of exposure to fine particulate matter pollution (called PM2.5 as fine particulates are 2.5 microns and smaller) – we’ll have more about particulates below in Rohit’s interview.

Rohit has always been interested in the unseen forces that shape our lives.

As a kid, he wanted to be an astrophysicist, intrigued by questions about the start of the universe. Now he’s turned his attention to air pollution, an often invisible force that affects health and well-being.

Still in his early twenties, Rohit has incredible academic and vocational experience.

His route to the Grantham Centre has taken him from India to Germany and Northern Ireland, before finally coming to The University of Sheffield. He’s got two degrees, including a Masters in engineering and computing. And he has undertaken work experience at Bosch, where he learned about low-cost air pollution sensors. He’s also an expert on the Internet of Things (see his blog about that if you want to know more).

Alongside his PhD, Rohit does a lot of outreach in the local community. He works with Graham Turnbull from Clean Air Sheffield to build and distribute pollution sensors, and together they raise awareness about air pollution. Recently he’s been setting up monitors in Kampala.  So we felt lucky to get some time with him!

How did you end up researching air pollution?

Coming from India – which has many of the worst places for air pollution in the world – I had assumed the UK had clean air because it looks clean. But I wasn’t aware of particulates. These are too small to see, smell or sense, but they are incredibly harmful to the human body.

And of course, it’s not just Belfast. Air pollution in parts of Sheffield this April was double the legal limit. This means everyone – adults, children, babies – smoked the equivalent of a cigarette a day. Imagine a baby with that kind of habit! It shocks people, but they need to know. Every day they are absorbing very high levels of air pollution.

Not everyone will know what particulates are, can you tell us more about them?

Particulates are tiny solids that float in the air.

If you think of air as a cocktail, made up of different amounts of gases and other things, particulates are part of this mix. They are very, very small. We call them either PM10s or PM2.5s.

PM10 means they are ten microns diameter across. This is about 1 tenth of a human hair. PM2.5, which is even finer, is one of the biggest threat to our health and classified as group one carcinogen. Some are so small, on the nanoscale, that we can’t even easily measure them at this point.

We breathe these in and they can affect every part of the human body. All our organs – including our airways and our hearts. Particulates affect our brains too with some studies showing they impact on decision making and even criminal activity.

If you could wave a magic wand and make everyone do one thing to stop air pollution, what would it be?

People talk about the ethics of telling people what to do, but I have no problem with it – people should stop using wood burners. Did you know that 38% of UK air pollution is from domestic wood burners and from burning coal. I don’t understand it – the UK has great central heating available, but people burn solid fuels in their living rooms and it’s filling their homes with pollution.

Wood burners create every size of particulate. This is a problem for those using them, but also their neighbours, who can suffer due to proximity.

I am sceptical that the Clean Air Zone will be effective in bringing pollution levels down. It’s a step taken in the right direction but too little too late – we need stronger actions sooner! Currently it’s kind of a ‘pay-to-pollute’ scheme that will only increase the burden on commuters. Also, it should include all types of vehicles.

The Clean Air Zone focusses only on traffic-related pollution. Studies have found that as much as 90% of the day is spent indoors where the levels of some air pollutants are often higher than outside. And only 12% of PM emissions and 34% (80% roadside) of NOx emission are from traffic. Wouldn’t it be better to ban selling wood burners and solid fuels?

For traffic-related issues, I would encourage investment in creating reliable, cleaner and affordable public transport infrastructure first. Such as clean fuel-driven buses and encouraging active transport.

What’s your overall aim for your project? What would you like all the data to do?

It’s important to me that my work has an impact. I don’t actually consider myself to be very academic, in the sense that I don’t like to limit myself to just theory. It is important for me to try and solve daily life problems faced by the community.

For instance, how can we turn awareness into action? I am always thinking: how I can make data that is admissible in court? What counts as evidence? What do policy experts need to see?

We have lots of studies that show the health impact of air pollution. What we need to do is link that data with data from the ground about where bad air pollution is. We need a real-time mapping of street-level air pollution.

And that is what my project aims to do, because we will create a spatio-temporal map that can accurately predict where air pollution is bad. This will be like what Google maps does for traffic. This will show how bad the problem is. And this should make for a very definite message – a call to action for the politicians.

There’s momentum around air pollution now, and we need to act on it. The Clean Air Bill 2017 was a start but it doesn’t go far enough, its targets are too low.

Are you optimistic about the future for the environment?

Yes, I am. We still have time to act. It has to be everyone working together and not pointing fingers. However, we need to act like we’re in a crisis – because we are.

Want to stay in the know about air pollution and other Grantham Centre research? Sign up to our newsletter

Rohit was interviewed by the BBC and ITV recently, see videos below ↓

The Grantham Centre has another brilliant air pollution project, our green barrier to reduce air pollution for kids. Find out more here

Great to see researchers from our Urban Flows Observatory on ITV's Calendar last night, talking about the important work they're doing to measure Sheffield's air pollution problem. Find out more about their work here https://urbanflows.ac.uk/

Posted by Department of Civil & Structural Engineering at The University of Sheffield on Tuesday, 2 July 2019

Written by Claire Moran, Communications Officer for the Grantham Centre