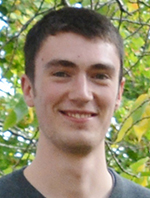 Grantham Scholar Dr James Thackery is now Head of Export Directorate Operations and Private Office at Department for International Trade (DIT). At the Grantham Centre he investigated the mechanisms of a gene that is a novel regulator of seed size in Arabidopsis.

Increasing food production is a global challenge. The United States Census Bureau estimates that the current world’s population is around 7 billion people. By 2050 and 2100 UN projections estimate a world population of around 9 billion and 11 billion, respectively. To meet the world population food demands of the future (making up for the environmental losses we are facing), it is estimated that food production must increase by 70%. By 2030, annual cereal production must increase by almost half (from 2.1 billion tonnes to 3 billion), and meat production by 85%.

One way to increase annual food production and increase crop tolerance to environmental stresses is to grow genetically modified crops. An important characteristic to engineer into crops is increased seed size. Together, the seeds of wheat, rice and maize provide approximately 57% of the world’s agricultural calories. Increasing the annual yield of these important crops, as well as many other seed-based crops, (eg, nuts and beans) could have large impacts of global food security. In addition to this, large seeds have better tolerance to abiotic stresses, which is ever more important under a changing climate. Larger seeds also have a higher seedling survival rate under competitive conditions, which is important in fields that suffer from weed infestation.

There is already precedent for increasing the size of crop seeds. Humans domesticated wheat around 10,000 years ago and this has resulted in a switch from a relatively small and thin seed, to a larger and wider seed. In the model organism Arabidopsis thaliana, many genes have been found that regulate the size of seeds. We have identified a gene that is a novel regulator of seed size in Arabidopsis: using genetic knockout techniques to make this gene inoperative can almost double seed size. This project will investigate the role of this gene in controlling seed size, and the mechanisms by which it does so.

You can find James on LinkedIn.