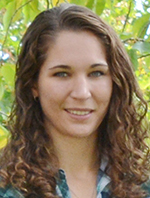 Hannah Sewell after the Grantham Centre

Hannah graduated from the Grantham Centre in 2019. Since then, Hannah has become a senior software engineer at In-Part, an information and technology service based in Sheffield.

In a blog Hannah wrote for In-Part about her new career in software, she said:

‘I started off doing plant physiology and some plant molecular biology work then ended up doing bioinformatics in Python and R. I often say I learned to code because a genome won’t open in Excel! I did find my PhD enjoyable, but by the end of it, I decided I’d rather just do the computer work rather than dealing with plants and went into software development instead.’

Read the full blog and find out more about Hannah.

Seed banks in a secure food system by Hannah Sewell. At this week’s Journal Club, Hannah Sewell introduced the group to seed banks. And they also looked at the differences between academic writing and journalism.

Stomata are pores in leaves through which gases are exchanged. When the concentration of carbon dioxide (CO2) is high, some plants naturally reduce the number of stomata on their leaves as they can take up the same amount of CO2 through fewer pores. This also makes them more tolerant to drought conditions, as water is lost through the same pores through the process of transpiration.

Being able to manipulate this response in important crop species would be desirable, especially as some major crop species such as wheat do not show this response, since it would make them more able to withstand droughts and high levels of CO2. However, there are large gaps in our knowledge of the genes controlling this pathway.

Seven hundred lines of the model plant species Arabidopsis thaliana, known as Multiparent Advanced Generation InterCross (MAGIC), are being used to carry out a Quantative Trait Loci study to try and fill in these gaps in our knowledge. This kind of study is used to determine which features of a plant’s DNA give it which properties, and the MAGIC lines are being studied in a range of CO2 conditions to see how they respond to different environments.

These responses will then be matched to variations in the plant’s DNA known as Single Nucleotide Polymorphisms, to see which genetic features control the plant’s response to different CO2 levels. It is hoped this project will lead to a better understanding of how plants respond to CO2 and that it will potentially identify new genes that make plants more resistant to drought.