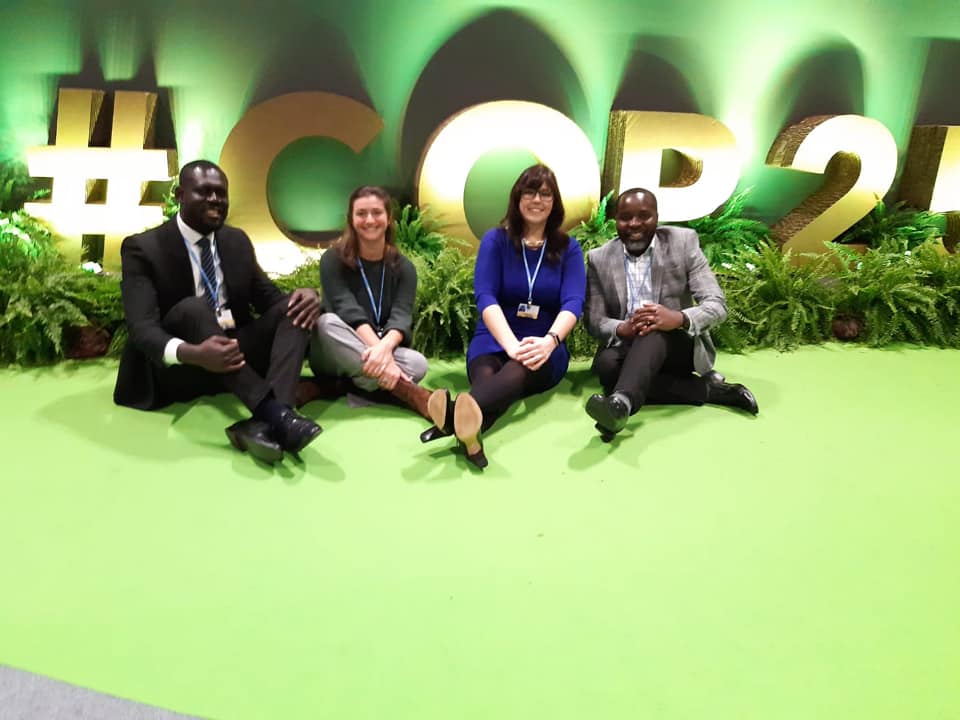 My time at COP25 gave me more than I expected.

As a social scientist working in sustainability, it was of course painful to see how selfish and useless governments and politicians can be with regards to the climate crisis.

But I also came out of COP25 with a lot to be positive about. Here are seven good points about COP25.

Indigenous groups and the Global South bear the burden of climate change effects. And they have been fighting against it for years. Yet, they have been continuously ignored by politicians, governments, and academics.

This erasure has persistently been an issue at COP conferences.

However, the first day I was at COP25 there was a press conference held with youth activists from Indigenous groups, the Global South, and other underrepresented places. Here these groups expressed the climate change perils they face.

The inclusion of Indigenous perspectives in discussions about climate change has historically been missing from COP. We still have a long way to go but it was cheering to see this this year.

2. Youth activists spoke boldly about the need for action

Four youth activists also spoke at this event. These were: Licypriya Kangujam (India), Julieta Martinez (Chile), Brianna Fruean (youth activist and environmental advocate of/for Samoa) and Nkosilathi Nyathi (Zimbabwe). And afterwards we had the privilege of chatting with Licypriya, Nkosilathi, and Brianna. We must listen to the perspectives, views, and haunting stories of those bearing the impacts of climate change.

The effect that Greta Thunberg has had on other youth activists, and adults, is beyond words. And it was reassuring to hear young people call out governments and politicians for not taking action. Overall though it’s the words of Hilda Flavia Nakabuye – who called out COP25 for being filled with talks and not action – that will stay with me. “You’ve been negotiating for the last 25 years, even before I was born [and I would] rather fail my exams than fail my generation.”

The youth strikers held a peaceful protest and a few minutes of civil disobedience, which included singing and protest chants. The young protesters did exactly what they came there to do – be heard, negotiate, and, of course, protest. Obviously, COP 25 did not approve and kicked 200 of them out. Due to public and attendee outcry, I assume, they eventually had their badges given back.

4. The importance of social science was acknowledged

Many of the conversations at COP 25 were related to human behaviour.

Examples include: getting sustainability policy passed in cities, fitting community needs in with policy, not understanding why youth climate protesters would protest, or getting people (including politicians) to change their ways.

I am well aware of the intense divide between the sciences and humanities. After all, I am an archaeologist and social-scientist/humanist in a “hard science” and policy world. I have seen the politics-academic divide, as well.

However, COP25 made it clear that it is scientists and politicians that they need to understand human behaviour better. They need to learn how to deal with culture, and/or understand why their innovations or policies don’t work in the real world.

COP panelists admit the need for social science and humanities

For example, I asked the panel of the UN side event on Sub-National Strategies in North America for Meeting Paris Commitments, about what politicians needed from us social scientists/humanists, about human behaviour and culture. (Note: you can watch a video of this here – question at 1hr 17m – just lick ‘join chat’).

Yutsil Sangines Sayavedra (SEMARNAT, Mexico; Mexican Climate Change Director) expressed the need for academics to be better communicators, provide options, and acknowledge when we don’t know the solutions, but also to push for experts to work with us.

Mandela Barnes (Lieutenant Governor of Wisconsin, USA) emphasised that academics need to reach out and talk with politicians and communities.

Jared Blumenfeld (Secretary for Environmental Protection, California, USA), stated that understanding our humanity is key in tackling the climate change problem, making it clear that social sciences and humanities are needed in the policy world. Misunderstanding people, and thus, humanity, is a problem. But it is a problem we have the solution for – the social sciences and humanities!

COP showed me exactly why the social sciences and humanities are needed in the fight against climate change. Because we need to know why people believe what they do, and act the way they do, and how these things can be influenced for the betterment of the environment.

As Jared Blumenfeld said, “if we can’t grapple with what it means to be human and moral, it’s really difficult to understand the mortality of the planet.”

5. There was hope from the States

Being from the USA, I had lost a great deal of hope for the USA after the 2016 elections. And Trump pulling the USA out of the Paris Agreement certainly did not help.

So it was eye-opening to see how much is still happening in the USA. Many are going against Trump, and are adhering, or trying to adhere, to the Paris Agreement. I learned of the movement We Are Still In, which really inspired me.

Ground Up Climate Action: Lessons Learned from US Subnational Actors

One of the events I attended with the U.S. Climate Action Center, organised by America’s Pledge and  #WeAreStillIn was was Ground Up Climate Action: Lessons Learned from US Subnational Actors.

With regards to relations with Native Americans, President Fawn Sharp emphasised that, “Indigenous Peoples and Tribal groups have a vast body of knowledge and this knowledge needs to be brought to the table… our solutions for the climate crisis won’t be as timeless as we hope if we exclude traditional ecological knowledge.”

Mayor Bill Peduto brought up the point that we [politicians] talk so much about offense [doing positive things for climate change and sustainability], but we need to talk about the defense, too. Pittsburgh may be taking huge strides to adhere to the Paris Agreement, but, fracking and oil companies are taking advantage of rural and post-industrial communities.

I had a chat with Bill Peduto after this panel discussion. We talked about what individuals can do to help rural areas (like where I’m from… Mars, Pennsylvania, USA) become more sustainable. Bill suggested demanding from politicians that we want clean air, clean water, and a sustainable future. He also said we should emphasise that young researchers and people will not come to work, live, or bring our businesses to these regions, if they don’t act on on climate change.

United for the Paris Agreement: CEO’s and Labor Speak Out

I also attended an event entitled United for the Paris Agreement: CEO’s and Labor Speak Out, held by The B Team at the U.S. Climate Action Center. It was panelled by Sharan Burrow (ITUC), Paul Polman (former Unilever CEO), Andrew Liveris (former The Dow Chemical Company CEO), Pedro Pizarro (Edison International’s President and CEO) and Jen Austin (We Mean Business).

I got to ask John Kerry a question

One of the most memorable moments I had was asking John Kerry a question at his World War Zero Event. I asked what I – a person from a gerrymandered, republican, pro-fracking district, with a Congressman who is an immovable Trump supporter – should do. At first, he joked that I should “work in a different district.” Not the most hopeful message! But he went on to make more positive points.

Kerry said that although we will never change everyone’s mind, we can still try. We can continue to work diligently with those who are hopeful and want to help. Either way, climate change affects everyone. Climate change is not something we can give up on, even if our hometowns refuse to believe what is right under their noses. We can never give up.

6. Networking with all sorts of people is useful

I networked with so many different people at COP25: from an environmental communications expert who focuses on hydrofracking, to the Vice-Chair for the IPCC, and research fellows from the UNFCC. There were far more opportunities for early career researchers like me than I could have imagined.

For example, it is easy to contribute to the IPCC. They allow anyone to comment on their documents. And every single comment is vetted. If your comment is rejected, the IPCC is required to provide you with an explanation – it’s an easy way in for early career researchers! This is a fantastic route for academics from the social sciences and humanities to take.

The Vice-Chair for the IPCC told me that more social sciences and humanities perspectives are needed, and that this is one of the routes we should use to get into this science and policy making world.

More broadly, COP brings together people from all over the world and from all aspects of life. Everyone meets with one another and shares research, information, and different perspectives. We need a plurality of thought and action to combat climate change, and COP facilitates this.

7. I realised the importance of social media in spreading the news from COP

It is imperative that we use social media to get information about COP out there. So many friends, family members, and even colleagues within my department, were not sure what happens at COP. To be honest, I don’t understand the workings of COP either. It is difficult to summarise such a large, international conference that has aspects of business, policy making, government negotiations, journalism, academia, and even the public.

Although COP may be geared towards politicians, scientists, and journalists, what happens there should be shared with our non-policy, non-academic friends. Those of us who attend COP need to be better about this!

Although I had many positive experiences at COP25, it was frustrating.

The science and humanities divide is pervasive even throughout COP. And the use of youth activists as props was upsetting. Further, governments talking about what change could happen, as opposed to actually enacting change, was infuriating and depressing. Unfortunately this is how the government and policy world continues to work.

But although I am disappointed in governments and politicians, my eyes are now open to how much work academics and the public needs to do. It is excellent that we Grantham Scholars can see and experience this for ourselves.

Finally, I am grateful and honoured that I was able to have this COP experience. It gave me a bit of hope for my country’s future and put a fire in my belly to make change.

This blog was written by Grantham Scholar Theresa Nelson