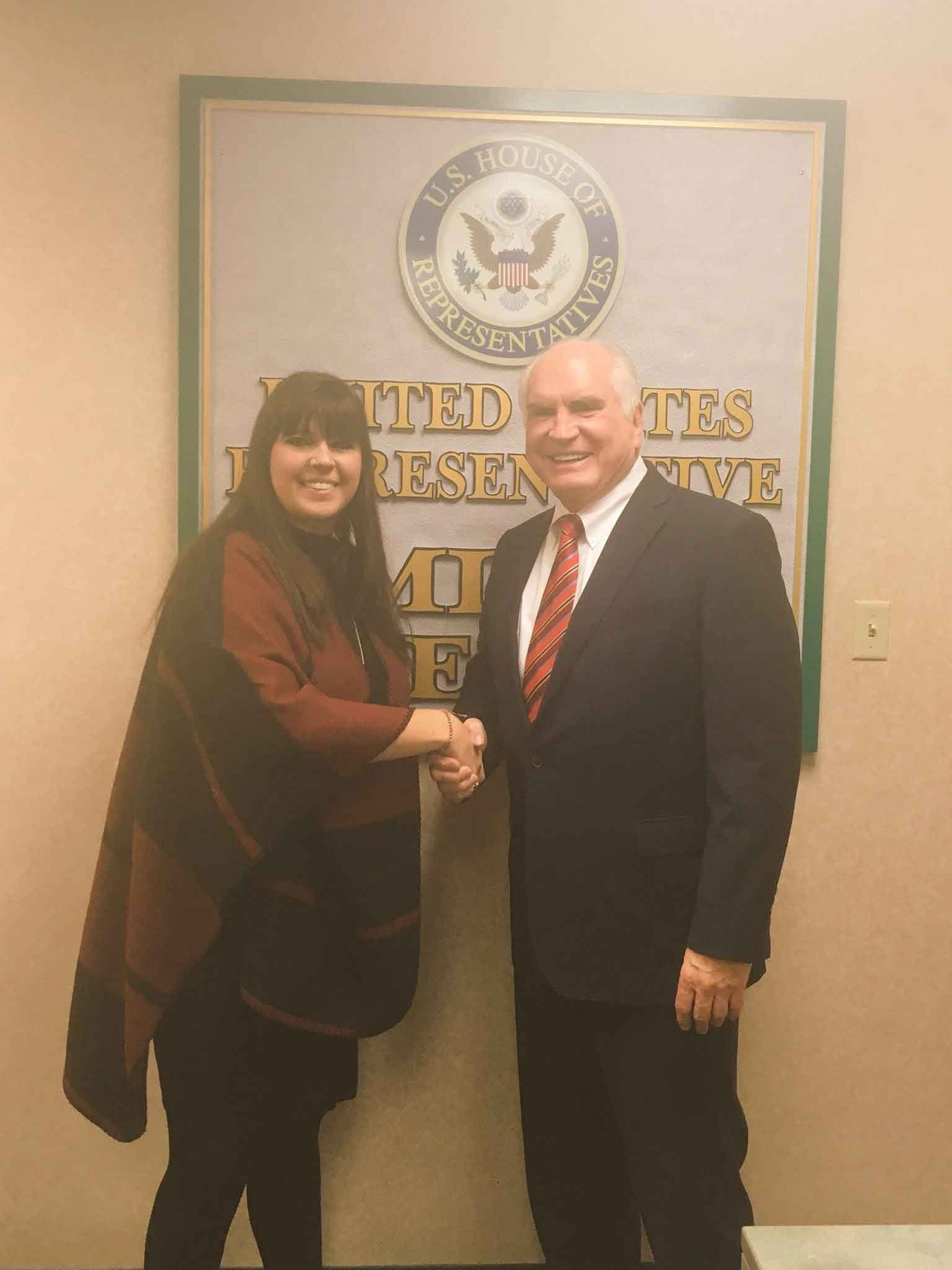 Despite being told there was no point in ‘talking to the enemy’, Grantham Scholar Theresa Nelson got time with a Republican Congressman from the other side of the political spectrum to discuss renewable energy – and left with renewed faith in democracy.

In the UK town halls are associated with jumble sales or the local council. In the US, they have traditionally been the focal point of local politics, where constituents are able to ask questions and stimulate debates with their governmental officials (i.e. Mayor, Congressman, Senator, local water board, school boards, etc.). Since the 2016 election, town halls have become quite hostile — the American people are angry and frustrated for a myriad of reasons, including the fact that fewer and fewer congressman are holding such forums and facing their constituents. Some congressmen, including my own, Congressman Mike Kelly, have decided to hold tele-town halls instead. Although this is a convenient way to include members of large districts, questions are more heavily vetted by congressional aides, so hostility from constituents can be avoided. On the evening of September 5th I received a phone call inviting me to participate in a tele-town hall for my district. .

Although I try not to stereotype members of the GOP, I did not expect my question regarding renewable energy resources to be chosen. The Congressman and I are on complete opposite sides of the political spectrum—I am a ‘solid liberal,’ and Kelly is a member of the GOP – not to mention, a participant in the Marcellus Shale Caucus, the Congressional Coal Caucus, the Natural Gas Caucus, and serves on the House Committee on Ways and Means (he helped to pass the Trump Tax Plan). Though his taking my question was a shock, his response to it was less surprising: “I have no problem with sustainable, renewable energy, but the cost in many cases far, far exceeds what people are spending right now to keep their homes warm, the lights on, the air conditioning working, and all the other things we are doing.”

As much as I wanted to interrupt and correct the Congressman on this point, I am fairly certain that constituents are muted whilst the Congressman is answering questions during a tele-town hall – this would not be the case in a public town-hall meeting.

“I’m not against renewable and sustainable energy,” he continued. “I think as we keep going forward we should keep trying to expand on them, but our standards—coal, natural gas, and oil—these have always been the standards for us (the United States); we just do a better job with it than any other place in the world. Am I concerned about the change in climate? Yes, I’m concerned about the changes in climate… The United States does play a role, but the rest of the world also has a responsibility… I’m just saying that for right now we have to go with our standards because that’s what keeps us competitive, helps us to drive our economy, and we need to make sure that we can compete with any other place in the world.”

So, unsurprisingly for a Republican on various non-sustainable caucuses, Kelly believes we should use the natural resources which our district is rich in (Marcellus Shale, Natural Gas, Coal, etc). However, I did get another surprise – he promised to listen to anything I had to say about about ‘bringing sustainable energy to our district’. So, I took the Congressman up on this and when I was back in the states this January, he was true to his word and met with me.

The polarization of American Politics

Congressman Kelly and I talked for over an hour about the difficulties of bringing renewable energy to our district. Aside from the plethora of fracking and coal throughout the district, there are apparently problems with building windmills in Lake Erie. Although Lake Erie has a great potential for providing wind power, there are environmental issues surrounding their installation—including animal migrations, Lake Erie’s pollution, and algae blooms, amongst other issues. With regards to Solar Energy—western Pennsylvania (especially Pittsburgh, just south of PA-03) is known for its dreary days, however, PA-03 has nearly as much Solar Energy Potential and Wind Energy Potential as other districts which have solar and wind farms. Furthermore, Pennsylvania limits solar buyback, which makes solar power (on the individual house level) less appealing.

Overall, with regards to bringing wind and solar to our district, Congressman Kelly seemed to be concerned about the following:

However, the biggest hurdle any politician in America faces when it comes to talking about ideas not normally associated with their party is the polarization of American Politics. Today, in the United States, there is extremely divisive language used by both parties – we’ve seen this divisiveness in American media outlets and research polls show that polarizarion has increased dramatically in less than a decade (see diagrams).

I will be the first to admit that I had my doubts about meeting with a GOP Congressman of Western Pennsylvania to further discuss Renewable Energies. This hurdle makes it extremely difficult for districts like mine, PA-03, to become more reliable on renewable energies. When I asked Congressman Kelly how to get over this hurdle and start to bring renewables to our district, he stated that education is the best way to tackle this. More specifically, going into schools and participating in public engagement activities which teach our children about renewable and nonrenewable resources: “People do the wrong thing not always because they’re bad people,” he stated “But because they don’t know that it’s the wrong thing to do”.

Although such an education initiative may take a few years to get running, Congressman Kelly stated that he would ‘definitely be interested’ in helping and would look forward to receiving any plans or ideas regarding such an initiative.

Many of my friends and colleagues voiced to me that meeting with my GOP Congressman about renewable energy was a ‘waste of time,’ and ‘not worth the energy.’ Coming out of this meeting, I do not feel this was the case. I did leave the meeting with reservations. Congressman Kelly has a few misunderstandings about renewable energy and its effects on the economy, and is still very much tied to coal, natural gas, and oil. (There are also a few ethical differences he and I have which are unrelated to sustainability issues – Congressman Kelly was an original co-sponsor of the Defund Planned Parenthood Act, and still actively pursues defunding it, which is another blog in itself.)

However, I also left the meeting feeling optimistic; my Congressman, a member of the GOP, was willing to meet and discuss an extremely polarized topic (at least, in the United States) with his constituent from the complete opposite side of the political spectrum. He acknowledged that Climate Change and sustainability are pivotal issues we must address. He discussed with me the issues within our district surrounding renewable resources, and, provided a potential solution on how to overcome one of the biggest obstacles PA-03 faces with bringing in renewable energy – political bipolarization.

Although American politics are chaotic right now, as an American, I am proud that I was able to take part in my democracy from over 3000 miles away. Proud to have had the opportunity to meet with my Congressman and have a meaningful conversation about renewable energy in our district. Proud that my Congressman made an effort to meet with his constituent at an odd time of year, and, made sure to meet with me while I was home. Proud that my democracy allows me to have such access to meet with government officials and discuss important issues. I look forward to meeting with Congressman Kelly in the future, and hope to work with him to bring renewable energy to our district.