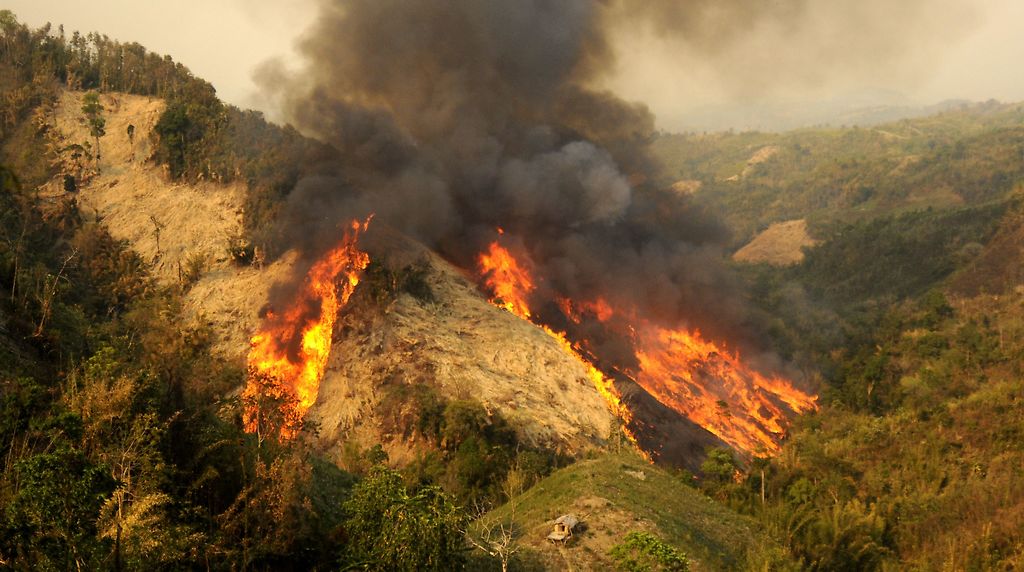 Grantham Scholar Oscar Morton publishes on forest restoration and shifting cultivation. Oscar’s research at the Grantham Centre is on effect that trade has on species abundance and extinction risk.

Here you can read Oscar’s summary of his paper and the ideas behind it.

Deforestation, income stability, and food security are key issues facing the world’s most vulnerable subsistence smallholders. Across the tropics, these smallholders most commonly rely on a form of cropping called shifting cultivation. This practice covers an area more than 10 times greater than the global area currently used for oil palm and rubber cultivation. And it feeds more than 300 million vulnerable subsistence farmers.

Shifting cultivation is when a small patch of forest is burnt and cleared, and then cropped for 1 or 2 years. After this time, a new patch of land is burnt and cropped. The previously cropped area is left to recover. Smallholders work in a cycle whereby they return to the plot originally cleared after 5, 10, 15 or 30+ years.

Previously, the practice has been erroneously termed, ‘slash and burn cropping’ – a stigmatising term. However, the burning phase actually returns crucial nutrients to the soil. So shifting cultivation maximises cropping yields. Plus it has a significant place in the community cultural and spiritual calendar.

For more information about the practice’s cultural importance, read this great first hand blog. It describes both the burning phase and the subsequent celebration in North East India.

Shifting cultivation in India: Low returns for farmers and the environment

As part of our research we focused on North East India, a region where shifting cultivation is prevalent.

We modelled the yearly income the practice generates for smallholders and found under nearly all scenarios this to be significantly less than $2,500 per year for each cycle. This is especially catastrophic, for example, if a smallholder practices a 30-year cycle. During a 30 year cycle at any one point there will only be a single plot under cultivation, and it is from this single plot that the majority of crops and income comes. In this scenario, there will be 29 previously cropped plots that are now recovering vegetation. These 29 plots represent a vast area of lost forest. Not only is this a lost haven for biodiversity and has lost the majority of its carbon stock – it does not generate significant food or income for the smallholder.

We researched whether both smallholders and forests could benefit through payment for ecosystem services schemes.

Under such schemes, smallholders would generate carbon credits by not clearing existing forests and by shortening the number of plots in their cycle (i.e. from 30 to 5). This then allows a number of plots to completely reforest without being cleared again. This second, cycle shortening, scenario preserves the culturally important practice but spares a much greater proportion of land to reforest and generate income through the sale of carbon credits.

The results of our work can be found in our recently published paper. You can read it here: Economically viable forest restoration in shifting cultivation landscapes by Oscar Morton, Joli R Borah and David P Edwards.

We found that this form of carbon-funded restoration would be highly viable across a range of cycle lengths and forest recovery scenarios. It thus ensures reliable income for smallholders and increased carbon storage across their local landscape.

Additionally, we found it would be cost effective for smallholders to not clear primary forest, and instead steward and maintain this carbon store. This process generates a stable income through the sale of avoided deforestation carbon credits.

Implementing these economically viable forest restoration and protection schemes secure a trifecta of successes for the local environment. These are increased carbon storage, maintained habitats and increased income security for rural smallholders.

Photo credit for main image: T.R. Shankar Raman. Picture shows a section of hillside in Mizoram, North East India, being burnt and cleared. In the background you can just see the mosaic of variously aged forest plots, some recently cropped, and some nearly mature recovered plots (cropped >10 years ago).